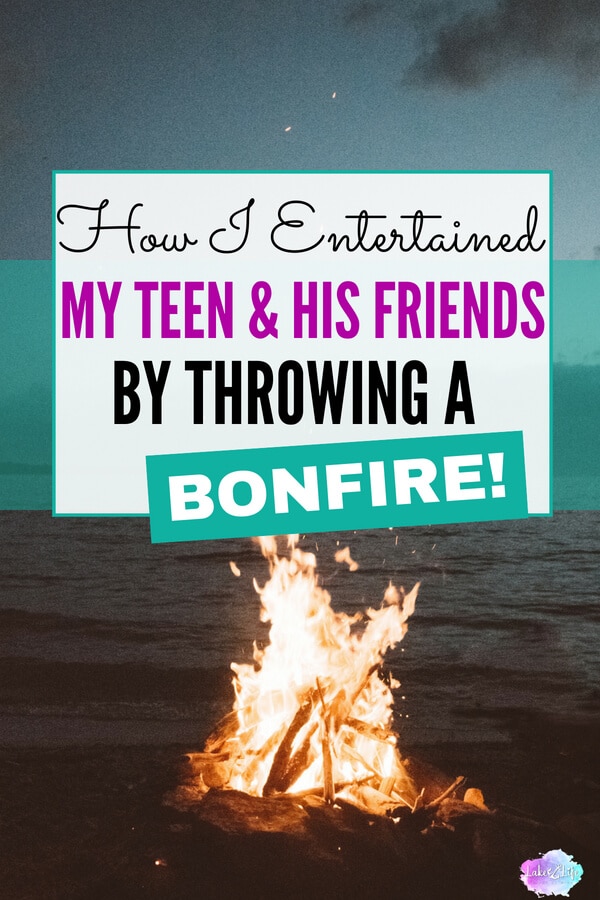 Bonfires! A fun way to spend time with your teenager and their friends. It’s amazing how this one simple bonfire made such a huge impact on our family.

It happens just like that. One minute you’re changing dirty diapers and wiping away tears, and then what seems like 2 minutes later, you’re sending your child to that awful place we refer to as HIGH SCHOOL. People tell you to appreciate all “the little things” and “every moment” because time flies by…It’s only until you experience it firsthand, that you realize just how quickly it truly goes.

The realization that our little boy, Zach was no longer a little boy, hit us like a ton of bricks in August when he started 9th grade.

I personally started freaking out about him going to high school towards the end of his 8th-grade year. I knew the day would obviously happen, but the fact that it was almost here was frightening to me.

Listen, I went to high school! I know what kind of “stuff” happens in that place. Was I ready to send my precious baby boy there? The short answer was NO. I wanted to tie him up and dare someone to come get him from me! The problem I was stuck with was I didn’t have a choice. He wasn’t a baby boy anymore and I had to trust that he would be okay… that we would be okay.

So we sent him. Not like we really had a say so in the matter, right?

Week one of high school, probably day 2, Zach gets in the car after school. We have our normal after-school conservation; How was your day? What did you do? Do you have any homework?

All was normal with the conversation until Zach hit me with this:

Zach: The first football game is on Friday and my section (referring to his band section) wants to do a sectional dinner before we have to leave for the football game.

Me: That sounds awesome, Zach! Have you decided where you guys want to go yet?

Zach: Not yet. Probably somewhere in “The Groves” but don’t worry Mom, Peter is going to drive me.

I wish someone was there to take a picture of my face at that exact moment because I am pretty sure my jaw dropped. I think the thing that got me the most was how nonchalantly it just came out of Zach’s mouth. Zach truly thought I was just going to let him jump into a car for the first time with someone I didn’t know. A 16-year-old someone I don’t know, at that.

I tried my best to “keep my cool” while explaining to Zach that unfortunately, he wouldn’t be able to go in someone’s car I didn’t know. I did offer to drive him and pick him up so he wouldn’t miss the dinner altogether. I’m sure that wasn’t the answer he was hoping for but it was better than nothing, right?

I agreed to revisit the idea in the future but explained that I would need to know these kids before I would ever let him drive with them alone. Zach understood and we left it at that.

The next few weeks were kind of rough. High school was a little more intense than any of us really thought it would be. Between band obligations, advanced classes and trying to make new friends, Zach was struggling.

As parents, Patrick and I were struggling as well. Up until that point, things were pretty easy with Zach. He got good grades and always had an abundance of friends. It was really hard to see him not flourishing as much as we knew he could.

There was one particular weekend that was finally the breaking point for me. After spending almost the entire weekend sleeping, I just couldn’t sit back and watch Zach go through this anymore. I knew I needed to step in and help him with this rough transition he was having with high school.

And then it came to me…Let’s have a bonfire!

We’ve had plenty of bonfires with our family and friends at the house already and they’ve all been huge successes. I wasn’t sure if it was going to work, but it was definitely worth a shot.

Zach and I put together a little invitation and he sent it to his bandmates through Snapchat.  The response was great and the kids seemed excited to want to come over for the bonfire.

What did that mean for me? I needed to get into “planning mode” and start coordinating the gathering. It was time to put my entertaining skills to good use.

What was on the menu?

I put a little trail mix together for the kids to snack on as they arrived. It was a hodgepodge of chex, goldfish, candy corns, m&m’s and more! The bonfire was during the fall so chili was the first thing that came to mind when I started thinking about the main course. I made a white-bean chili and a regular chili so there was some variety. Instead of cornbread, I made my famous corn casserole to go with it. I had all the fixings too: cheese, sour cream, onions, jalapenos. The set-up was very similar to the chili cook-off I did for Super Bowl. You can take a look at the pictures, here. We had soda and water for drinks. For the dessert…S’mores of course!

The star of the night was the bonfire of course. Patrick lit the fire just before everyone got there. Zach had his DJ equipment going so there was music constantly playing in the background. We pulled out the Giant Jenga, corn hole set, and sports balls. Some kids threw around the football, some played basketball and others just relaxed around the fire.

The night was a complete success! Zach had a great time and from that point forward he started becoming more and more social. Patrick and I got a chance to really see the kids Zach was spending his time with and it made us feel more comfortable and at ease with this whole high school transition. 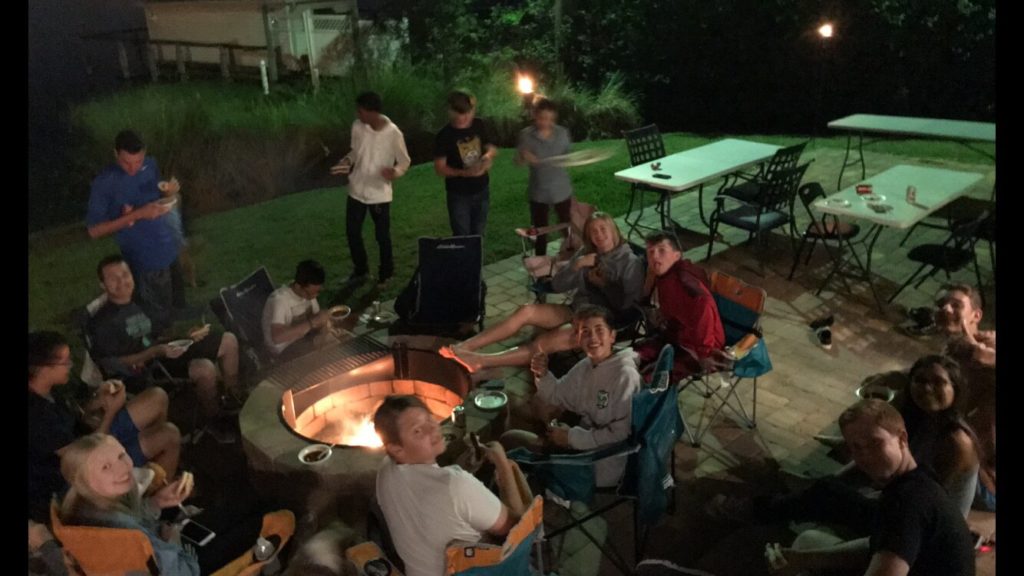 I knew the kids had a really great time when the holidays rolled around. How? Simple..they literally orchestrated another bonfire amongst themselves and we had a white elephant party over the winter break. Gotta love kids!

For this one, I opted to order pizza and didn’t go as extravagant as the first one. It didn’t phase them at all, by the way. They had a great time, regardless! Take a look for yourself. 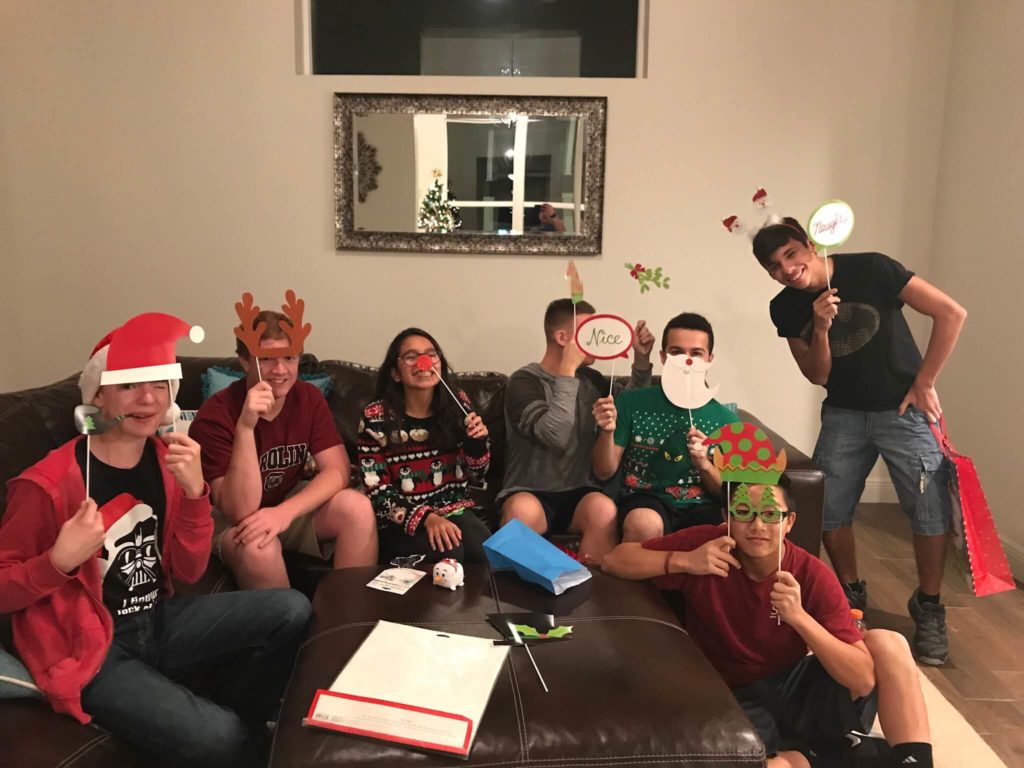 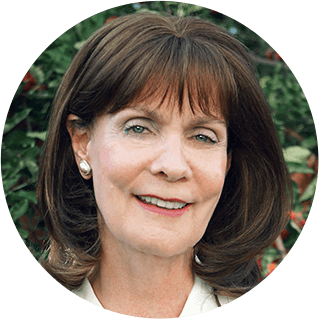 I can not begin to tell you how truly lucky I was to have crossed paths with Sharlene. She’s an astonishing woman! She’s brilliant, honest and has the biggest heart. Sharlene is the writer behind, Good Parenting Brighter Children, which has become one of my most favorite blogs to read.

Sharlene keeps it real with you! Being a mother of 5 boys and 12 grandchildren, she knows that being a parent in today’s day and age is tough work. She gives you advice on being a better parent and grandparent, but always backs it up with the science behind why it’s important. It’s spectacular.

What is her focus this week? The Parent-Child Bond.

Sharlene states that “Parent-Child relationships are crucial!” She goes on to give you three ways to “rock your parent-child bond!”

Did you know that the bonfire we threw for Zach and his friends was a great example of building the bond she talks about?

Another suggestion from Sharlene for building the bond: Have “Friday Night Parties” with your kids. She and her husband did this with their sons and the rewards were unmeasurable.

Sharlene and I had a phone conversation about these “Friday Night Parties” about a month ago. What really stuck with me from that conversation was something she mentioned about her sons’ friends after they graduated high school. Years and years later, when all these boys had grown, they still stayed in touch and even invited Sharlene and her husband to their weddings. Isn’t that amazing! Talk about leaving a good impression on someone!

Click here to read all about “Friday Night Parties”.

While you’re there, take a look around her site. I few of my favorite posts from her site: “Does Mozart make you smarter? If so, how?” and “It’s more important to be their parent than their friend.”

Patrick and I are constantly working to be good parents and to stay involved with Zach. We aren’t experts by any means but we try our best because it is important to both of us.

My entertaining idea. It might’ve been just a bonfire, but it was a fun way to spend time with our teenager AND his friends. They know us, we know them and we are now all on the same page. Plus we can rest a little easier as parents knowing who our child is choosing to hang out with.

In case you were wondering, Zach and I did revisit that dreaded conversation about him driving in a car with his friends. I finally did let Zach get into that car with Peter and two other friends. I should probably add that I followed behind them in my own car. Baby steps, baby steps. What can I tell you?…Here’s to being good parents!

Want to remember this? Post this idea for a Bonfire Party for Teens to your favorite Pinterest board! 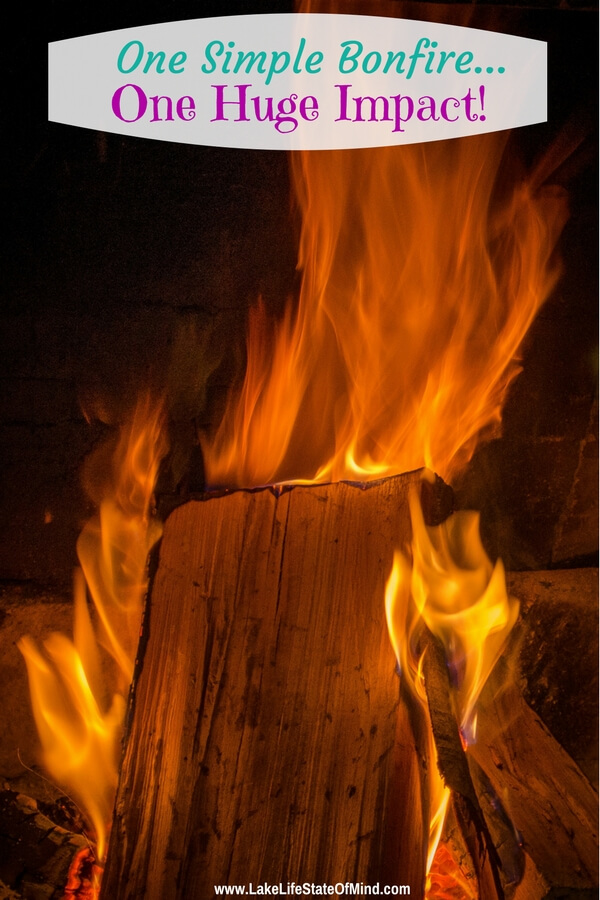