Using Fireball Whiskey and Cream Soda, learn how you can recreate the flavors of a cinnamon roll into the perfect fall cocktail recipe. This Cinnamon Roll Cocktail is creamy and packed with a ton of cinnamon flavor. A must-try fall drink for the season! 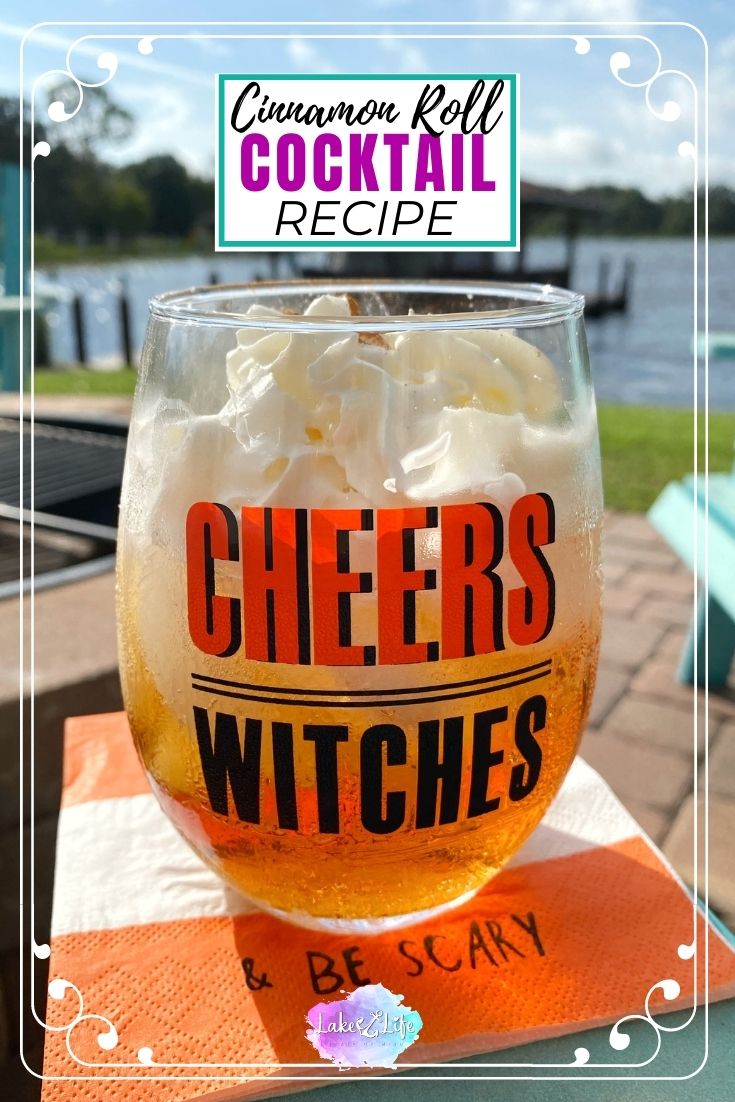 Cheers Witches! How are you on this fabulous Thirsty Thursday? If you’re not having the best day as of yet, I think I might have something to share with you that will make you happy. Or at least I hope it will cheer up your mood!

How does a Cinnamon Roll Cocktail sound to you right about now?! Yes, you heard me right. I’m about to share with you a cocktail that tastes similar to a cinnamon roll…just in liquid form and with an added kick in the form of Fireball Whiskey!

This recipe is one I’ve been holding in my back pocket for quite some time now. I came across it when I was creating my Spiked Root Beer Float for Opening Day of baseball. Although this cinnamon roll cocktail is served on ice, I felt the flavors lent themselves more with the fall season and not so much for the summer months when I initially found it. 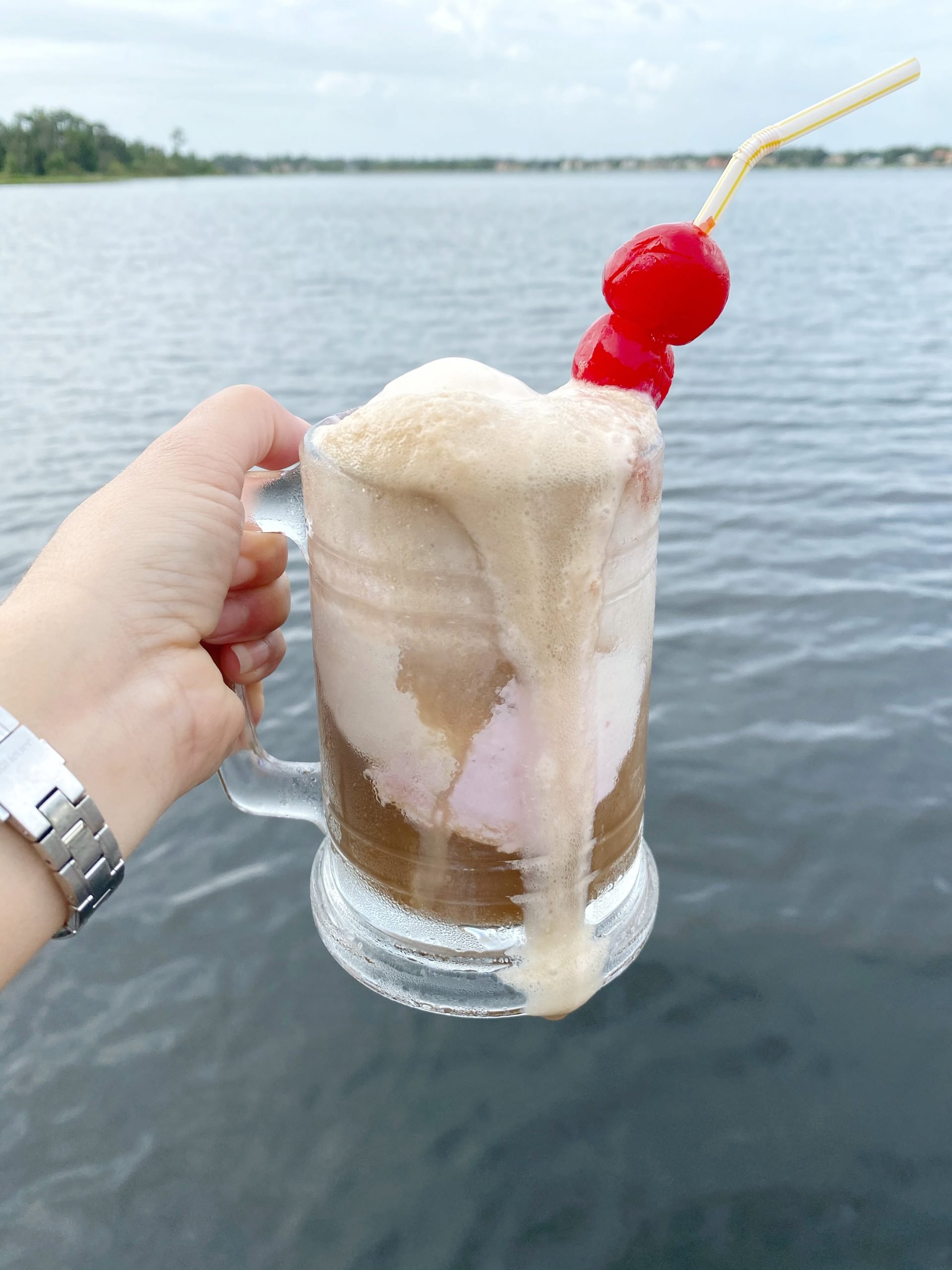 So, yes, in full transparency I’ve been holding out on you for a few months with this Cinnamon Roll Cocktail. I’m sharing it now at least. I hope you can forgive me and we can still be friends. We’re still good, right?!

Who would’ve known that combining cream soda and Fireball whiskey would produce such an awesome creamy, cinnamon fall-flavored cocktail?! Adding the whipped cream and cinnamon on top may seem a little extra to you, but it just amplifies the cinnamon roll flavor in my personal opinion.

Plus, who doesn’t enjoy being a little extra sometimes! Case in point, last week’s cocktail was an Apple Cider Mimosa. It’s another two-ingredient cocktail just like this fall drink recipe. Simply add apple cider and Prosecco in your champagne flute and you’re done. OR…be extra and dip the rim of your glass in caramel sauce and then roll it around in a cinnamon and sugar mixture. Wowzers!!

My Easy Apple Cider Mimosa Recipe is the best fall cocktail around. With just two main ingredients, this apple cider mimosa is a must-try fall drink for your next fall brunch, Thanksgiving morning, or “just because” during the autumn season. You could stop at just two ingredients , but if you’re fancy like me, don’t forget to rim your glass with some caramel sauce and cinnamon sugar! Yum!🍁🍁 . #thirstythursday #mimosa #mimosas #fallcocktails #falldrinks #applecider #appleciderdrink #lakelifestateofmind

Another fun presentation for this fall cocktail would be to add them into shot glasses instead. I’ve actually seen this exact drink while researching fall cocktail ideas. They even have a name too, Cinnamon Roll Shooters. Cute name, don’t you think?!

These Halloween shot glasses would be the perfect vessels for your Cinnamon Roll Shooters. And although I couldn’t find the exact cocktail glasses and napkins I used for this Cinnamon Roll Cocktail, I was able to find these similar Halloween glasses and Halloween beverage napkins that are just as adorable!

Before I get started on this labor-intensive recipe, total sarcasm so you know, I want to give you a little tip pertaining to the Fireball whiskey you’ll be adding to this fall concoction. If you’ve never tried Fireball whiskey before it can definitely pack a punch!

If you’re a little worried about feeling a teeny bit too much heat from the Fireball whiskey, I suggest starting with adding just a splash of it in your cream soda and then giving it a taste test. You can always add more liquor but you can’t take it back so proceed with caution! You’ve officially been warned. 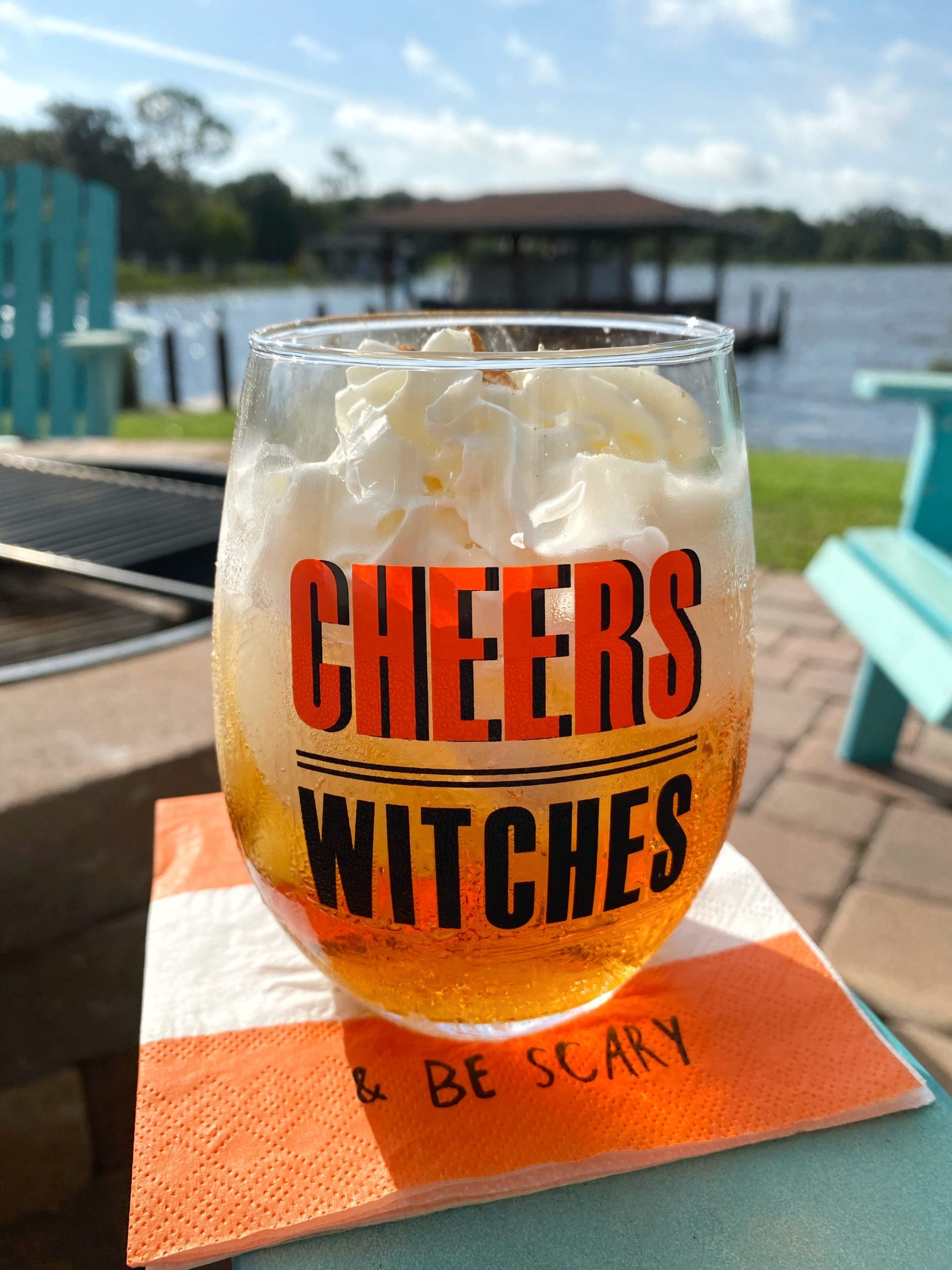 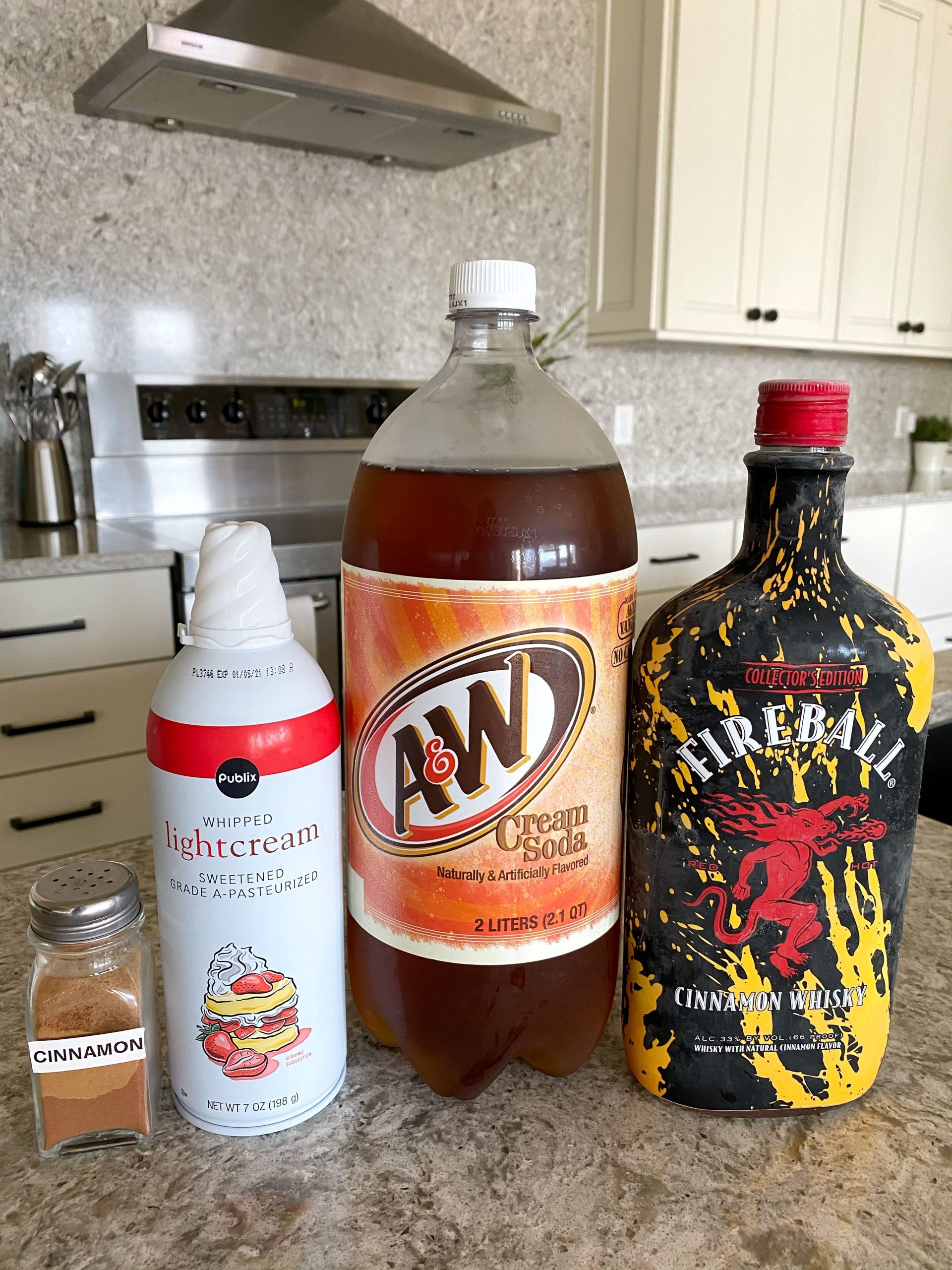 Begin by adding ice to your cocktail glass. 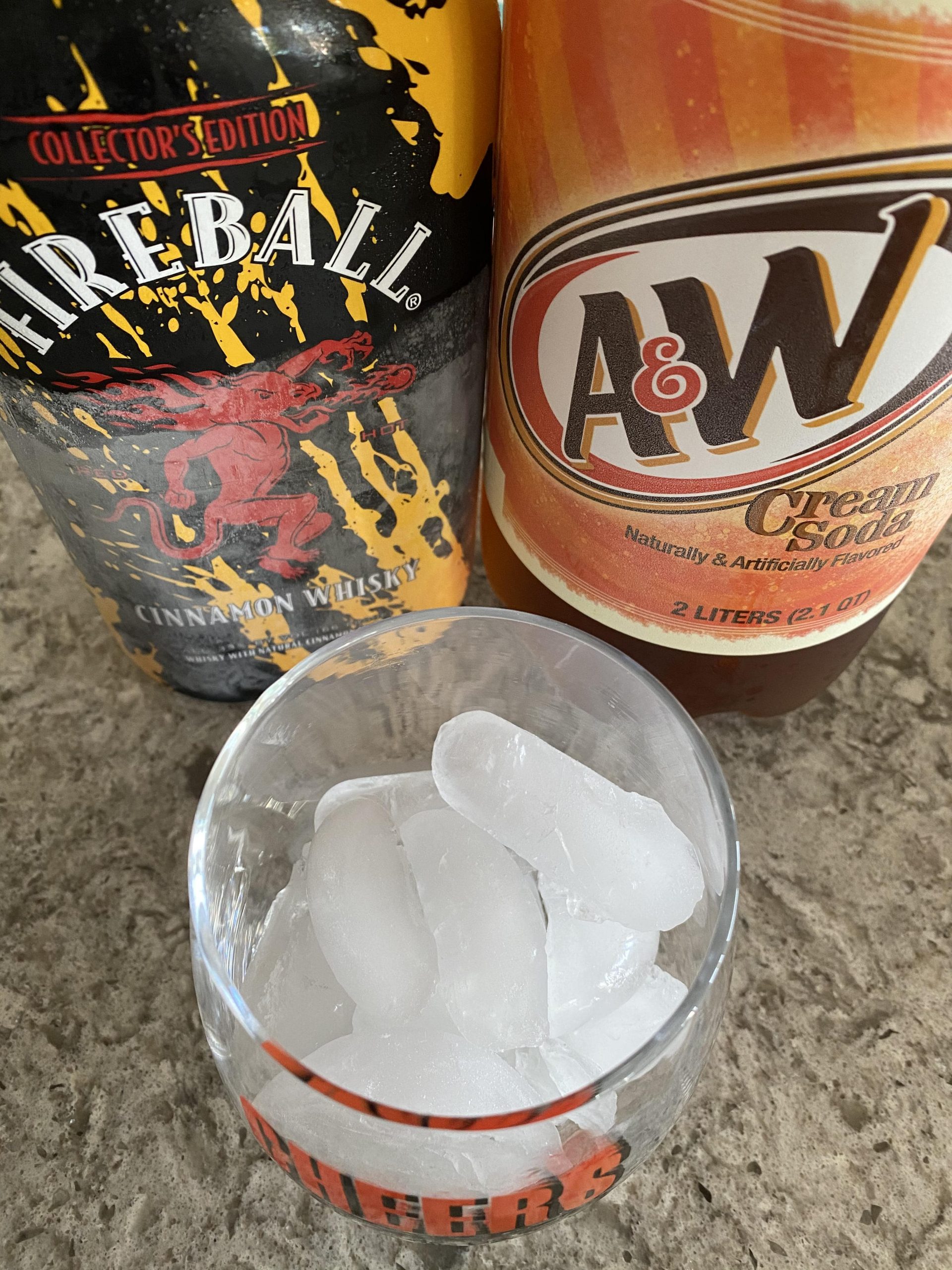 Measure out your cream soda and add it to your glass. 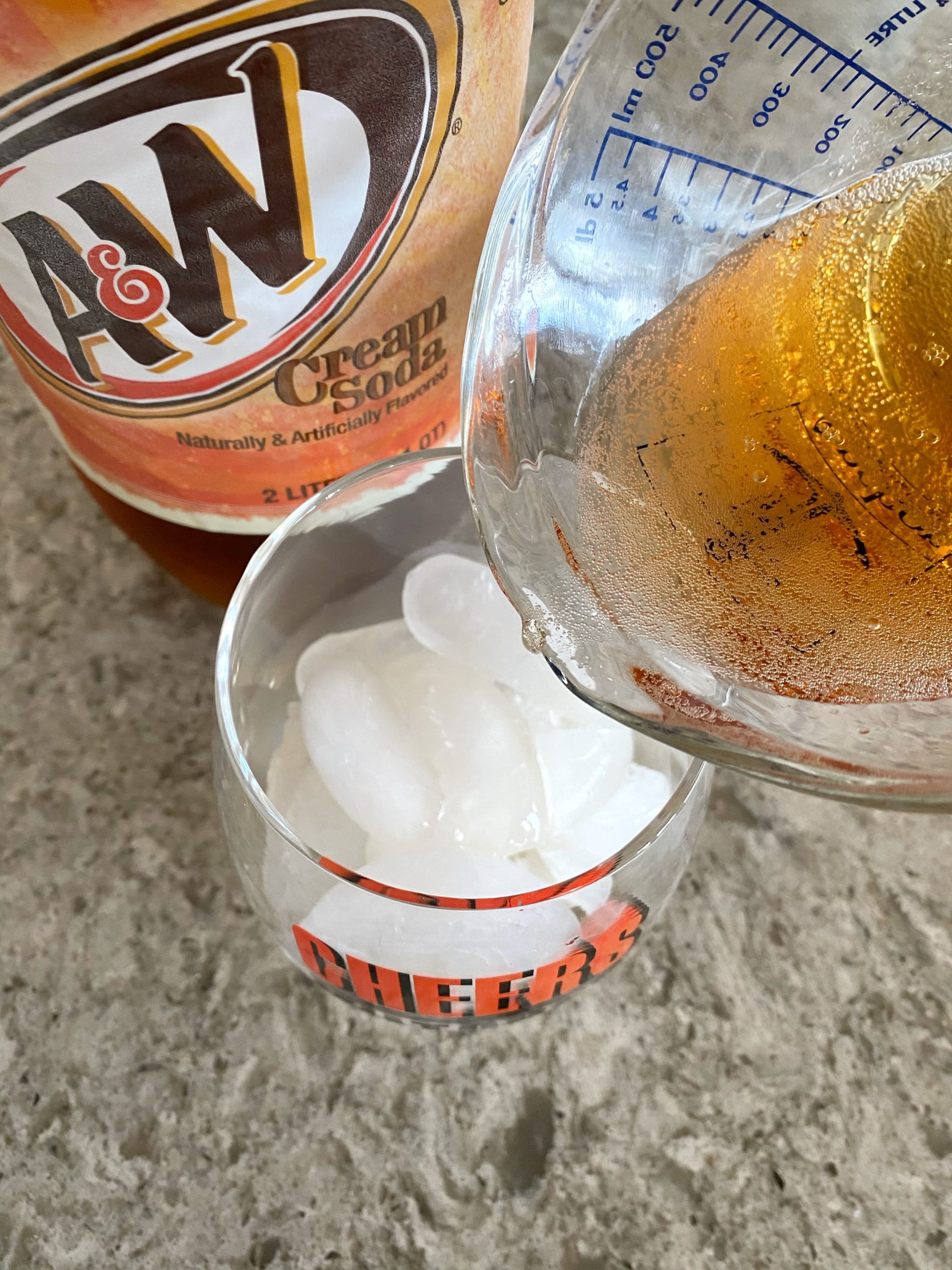 Next, measure out your Fireball whiskey and add it to the party. Remember to start small if you’re a newbie to the world of Fireball Whiskey! 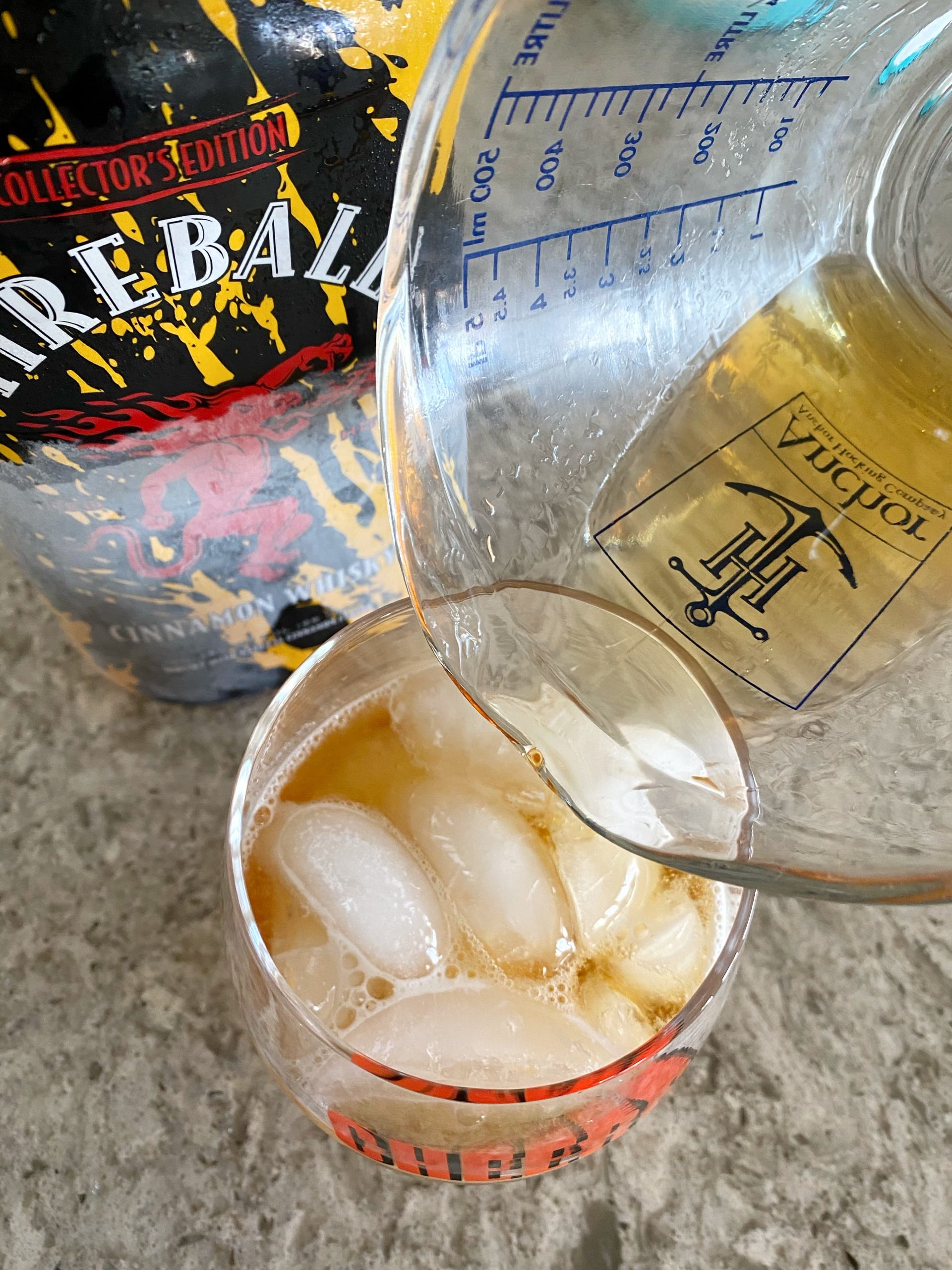 Give everything a stir and top with whipped cream and cinnamon but only if your little heart desires. 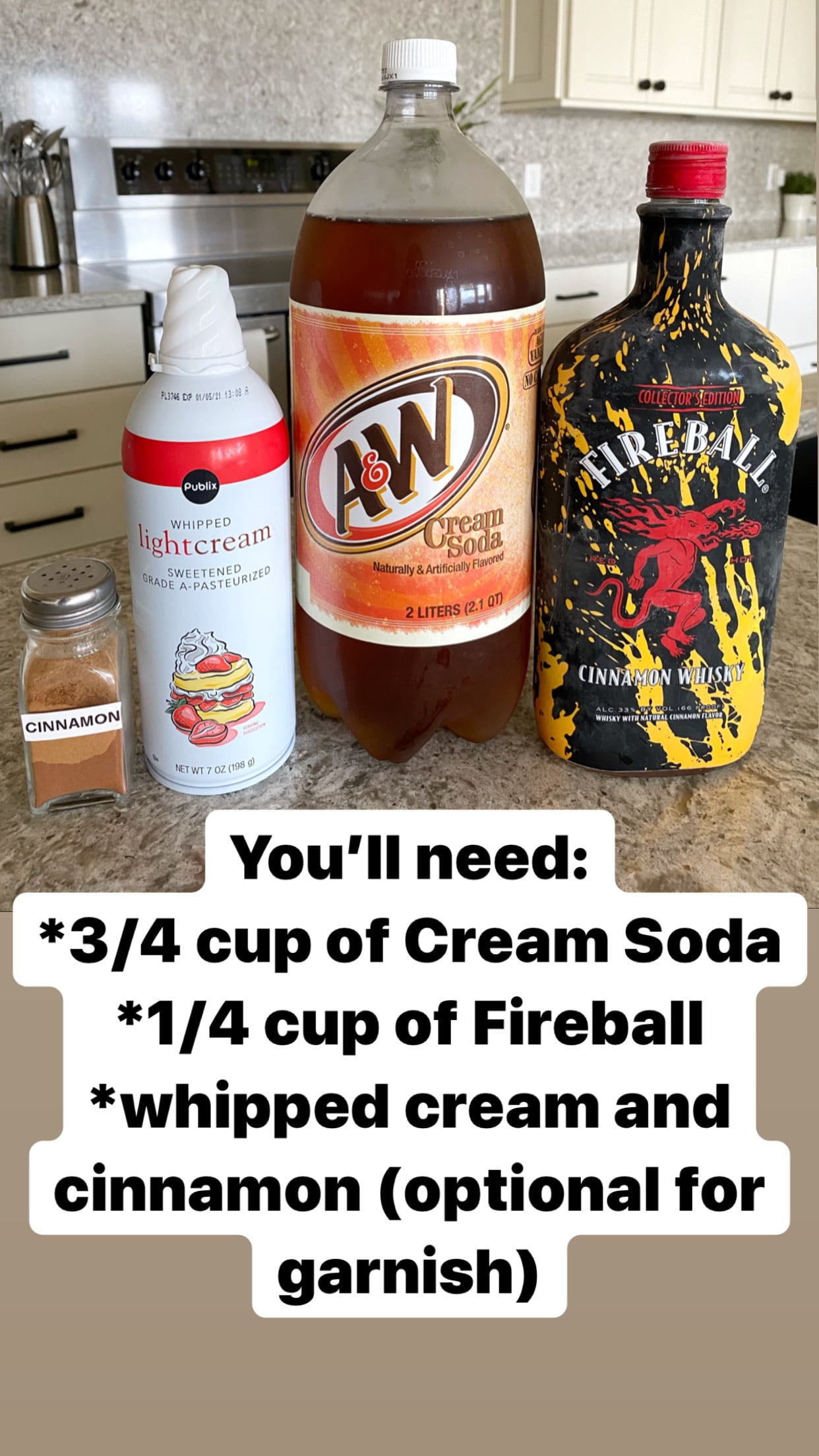 This Cinnamon Roll Cocktail is the perfect fall drink to keep you warm while you’re hanging outside around the bonfire with your family and friends. Your tastebuds will be thanking me for sharing this deliciously creamy, cinnamon drink with you. I can’t wait for you to give it a whirl! 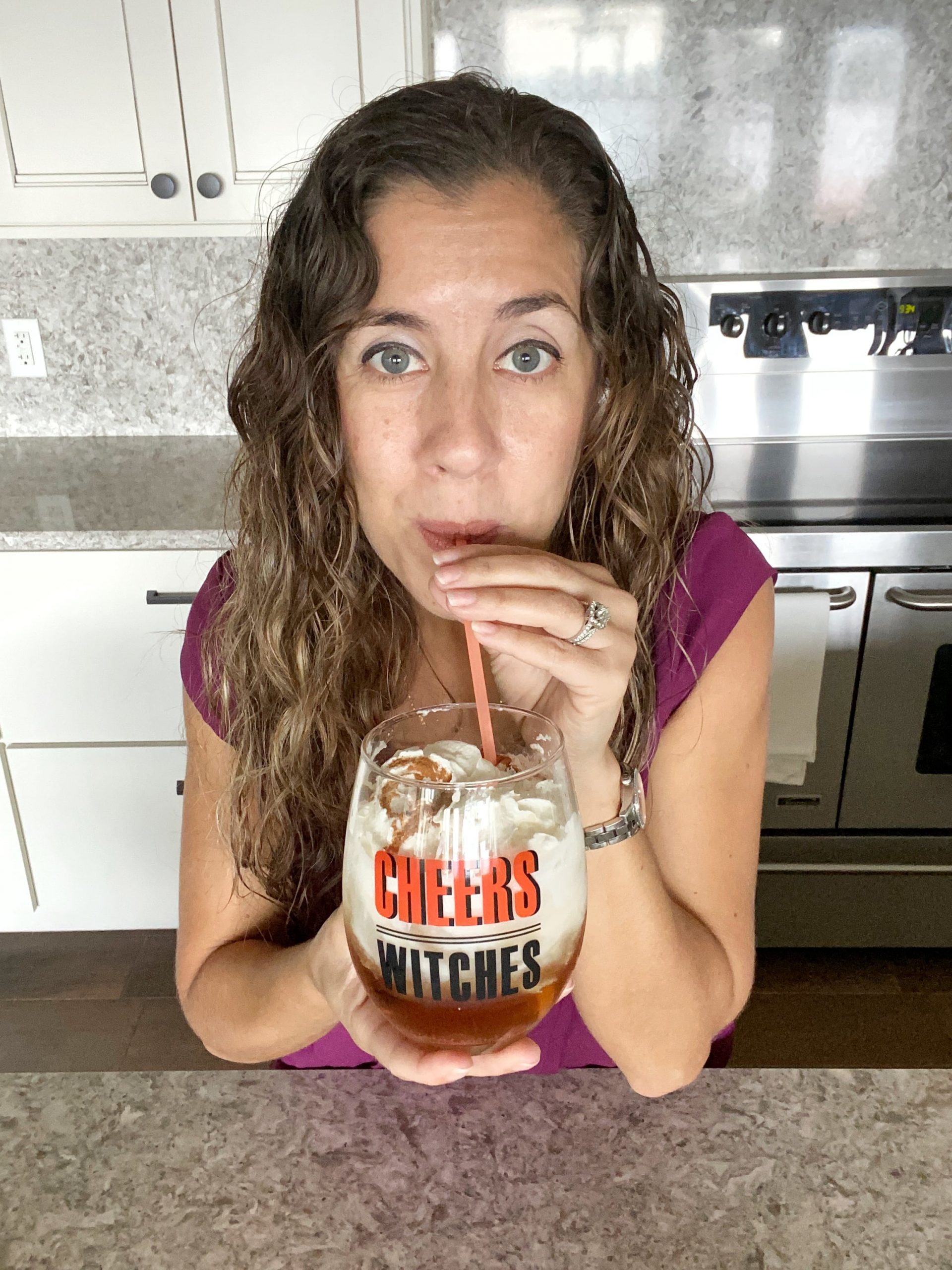 Make sure to check out my many other Thirsty Thursday concoctions below. You can join me on YouTube as well for all the videos associated with each of my cocktail recipes. There are so many to choose from, I know you’ll find something that will ultimately make you happy. And if you don’t for some crazy reason unknown to me, please let me know and I will make sure to create something that satisfies your alcohol palette. I’m here for you, folks!

If you’re a little worried about feeling a little too much heat from the whiskey, I suggest starting with adding just a splash in your cream soda and giving it a taste. You can always add more liquor but you can’t take it back so proceed with caution! You’ve been warned.

Want to remember this? Post this idea for a Cinnamon Roll Cocktail to your favorite Pinterest board! 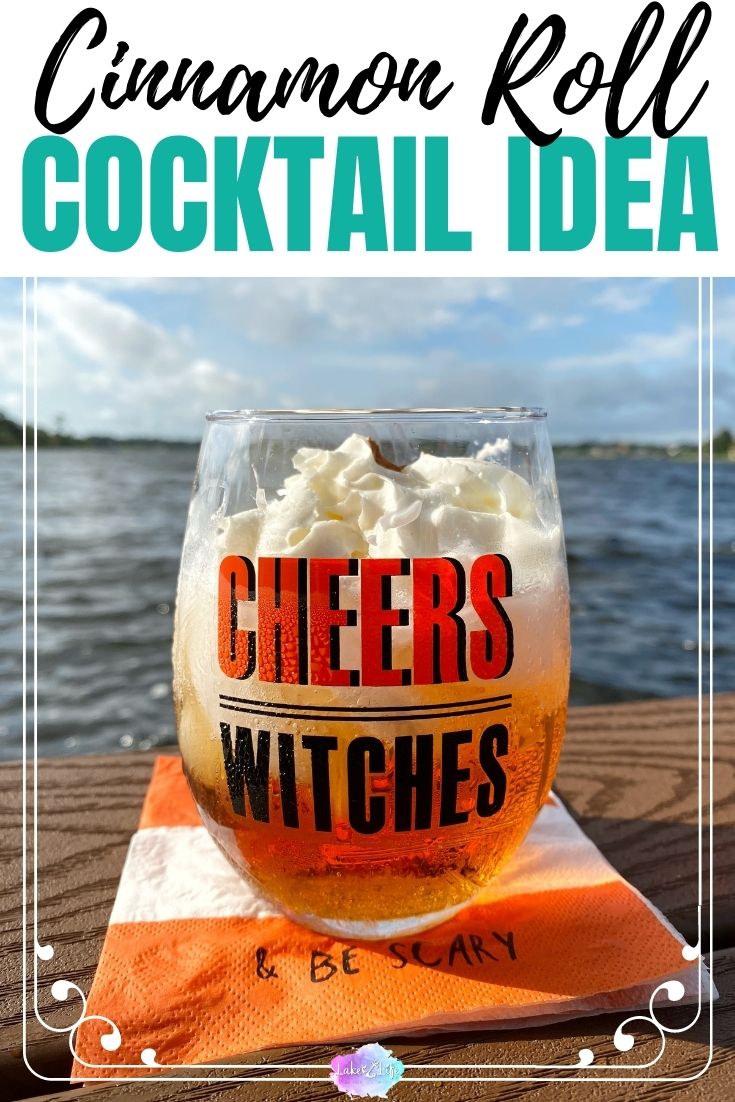