Super Bowl is something we look forward to every year in our house. We throw a huge party and always have Fun Super Bowl Games for our guests to enjoy. Stop by the lake and learn how to play two new Super Bowl games. Don’t forget to print your free printables while you’re at it! 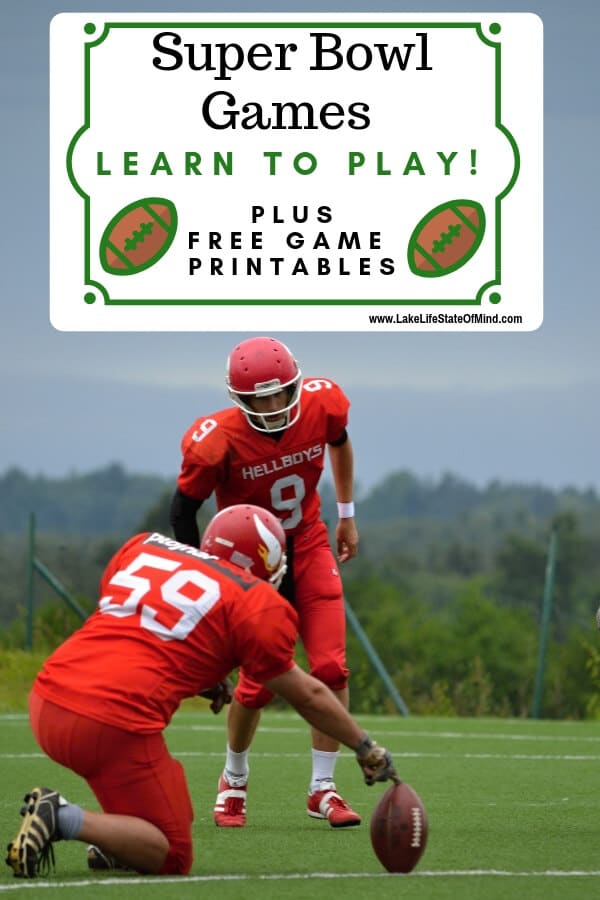 Super Bowl is a pretty big deal in our house! Our family’s love of football combined with my pure joy of entertaining makes a Super Bowl party a must on our calendar every year. Some years are bigger than others, but regardless of the size we always have a blast.

To keep everyone involved, especially those who could care less about football, I like to have some Fun Super Bowl Games on hand for our guests.

This year we will be playing two games, during “The Big Game”.

Below you will find the two games explained in detail along with the free printables to go with them. Just fill out the form at the bottom of the post to gain instant access to the games.

Football Squares (Fill out the form below for free printable)

Gambling and sports kind of go together, don’t you think? Football Squares is a game where you and your guests purchase squares in hopes of being one of four winners to get a piece of the pot. We play this EVERY year and I couldn’t imagine Super Bowl without it.

Here’s how it works:

Step 1: Start off by printing out this 11 x 11 grid that I made all nice and fancy just for you. 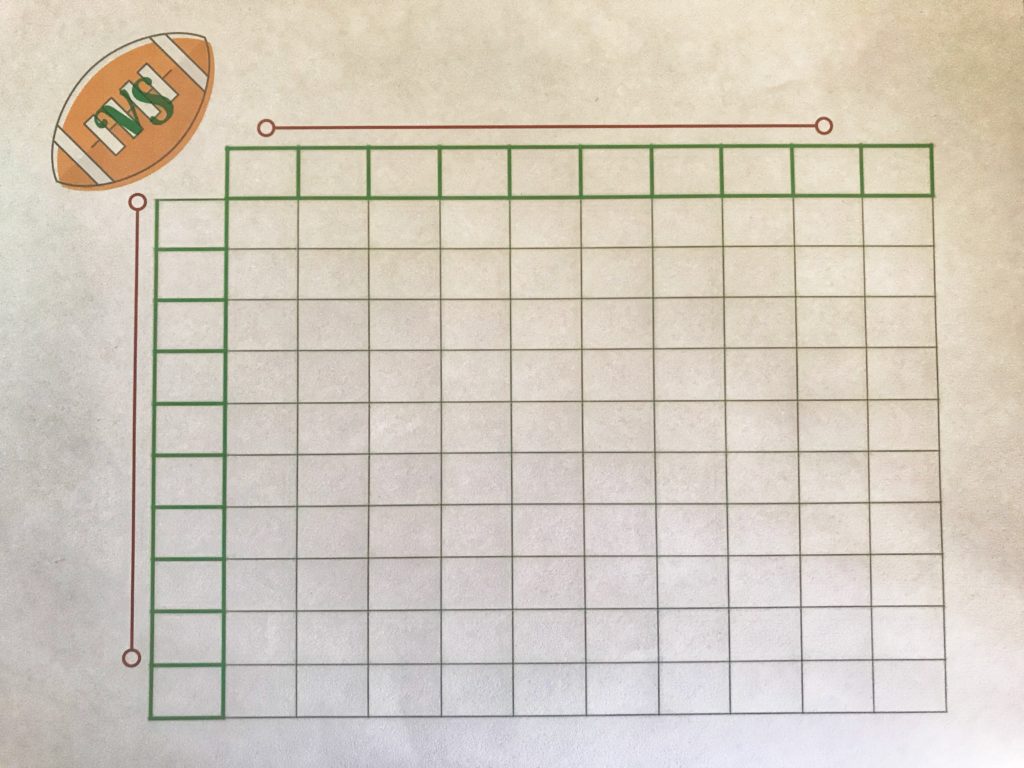 You’ll notice that the top row and left column have bolder boxes around them. These boxes can’t be purchased and serve a different purpose in the game that I will explain in one of the next steps. The other 100 squares are what you and your guests will “purchase”.

Step 2: The next step is to start selling those 100 squares! How much do you sell them for? This is completely up to you. Personally, I wouldn’t sell them for less than a dollar a piece because the winnings will be minimal and kind of not worth it at that point.

Breaking down the math

One piece of advice. If you decide to charge more per square I would suggest trying to fill the squares a few weeks before the Super Bowl so you can find enough people to fill up all 100 of them! If all 100 boxes aren’t purchased the game won’t work and you might be stuck purchasing all those leftover boxes. No bueno!

Each player gets to decide what squares they want to buy. You will show the player the grid and they are able to pick any of the squares that are still available. As a player picks a square, have them write their name or initials on it to secure that space. You can do this in person or send a picture of the grid by text and let the player pick out their squares that way.

The picking of the squares is completely random at this point. The way we play the game is based more on luck than anything else. The picture below is a filled chart. 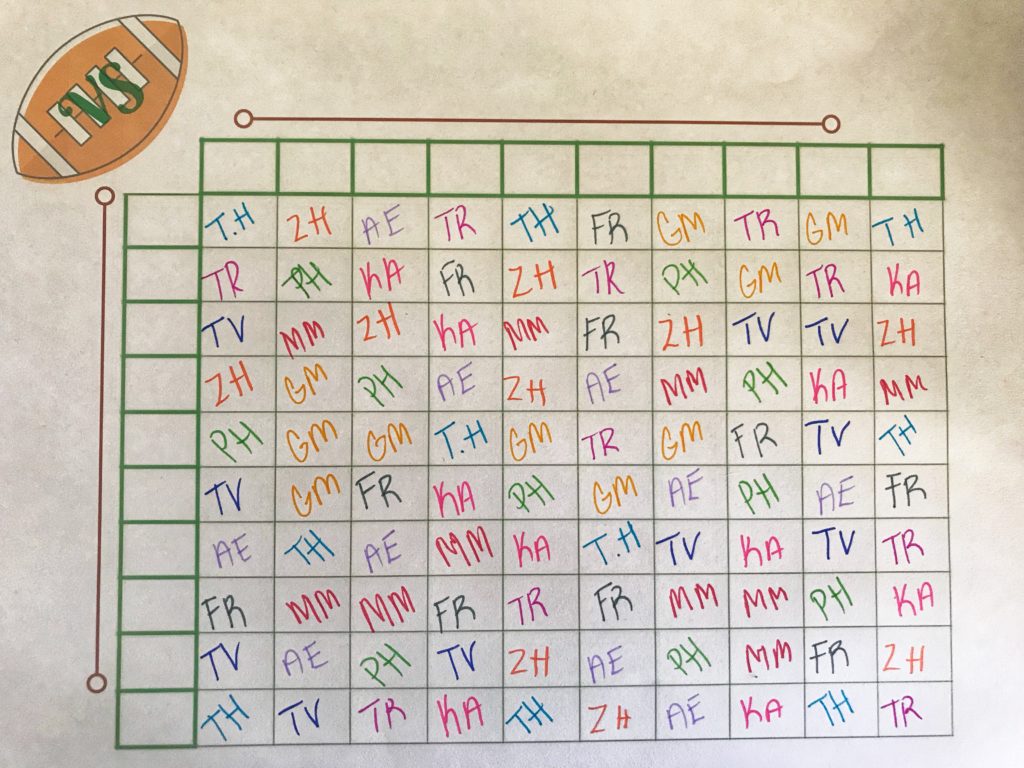 Step 3: Once you know who will be playing in the Super Bowl, and all 100 squares are taken as pictured above, you can start filling in the missing information on your grid. You’ll want to have this done before the Super Bowl party begins.

You will use page two of the free printable to complete the grid. 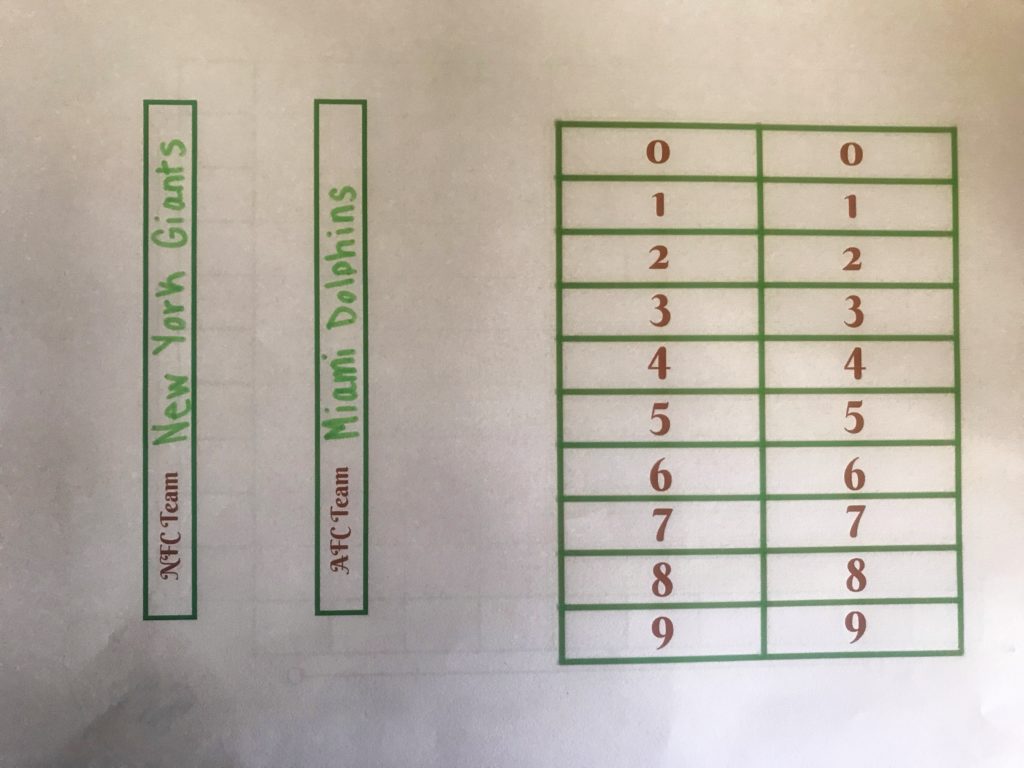 First, you will see two strips of paper that you will need to cut out on the left side of the paper. One says NFC team and the other says AFC team. Write the teams that will be representing these conferences on the strips and fold them up so you can’t see the names. Have someone in your home pick a strip and open it up. That team name will go on the line along the top of the grid. The other name will then go along the line on the left. 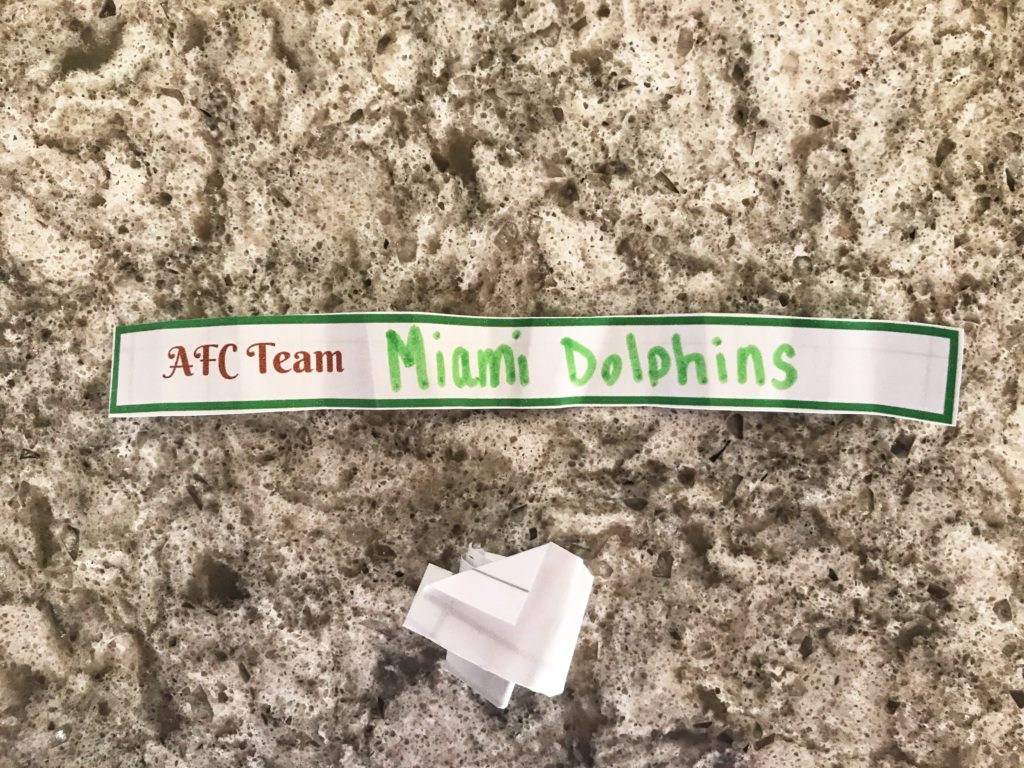 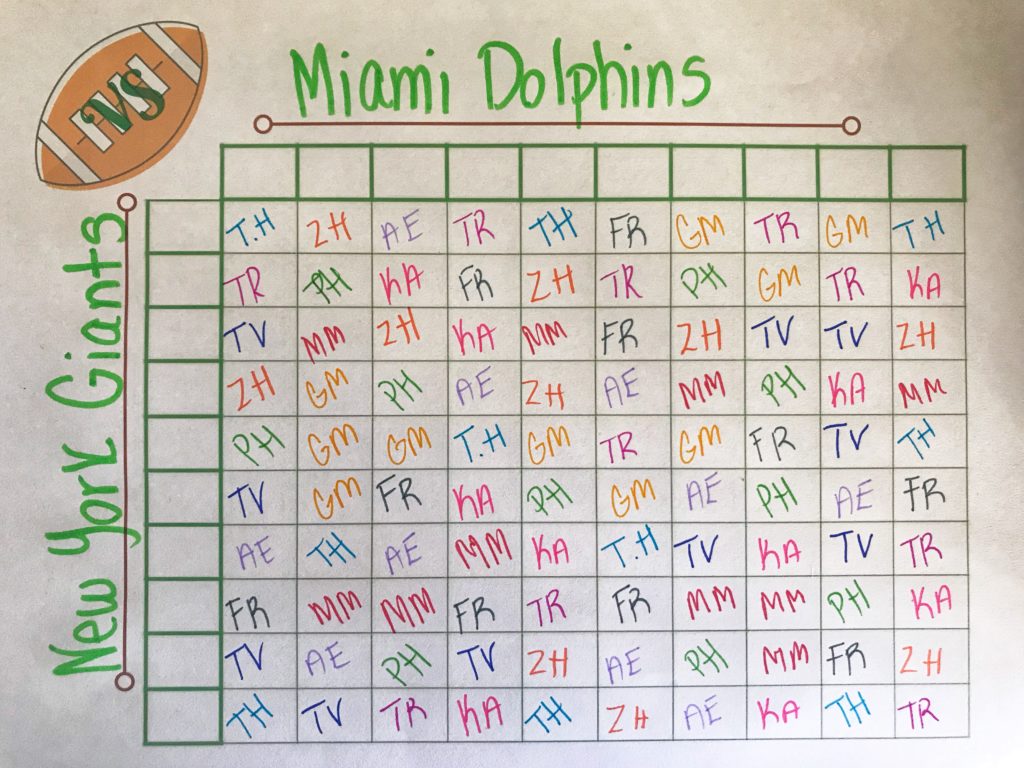 Next, you will cut out the two columns of numbers making sure to have two piles that have all the numbers from 0 to 9 in them. Fold the papers up so you can not see the numbers. You can have someone else around to help draw the numbers to keep it all fair! 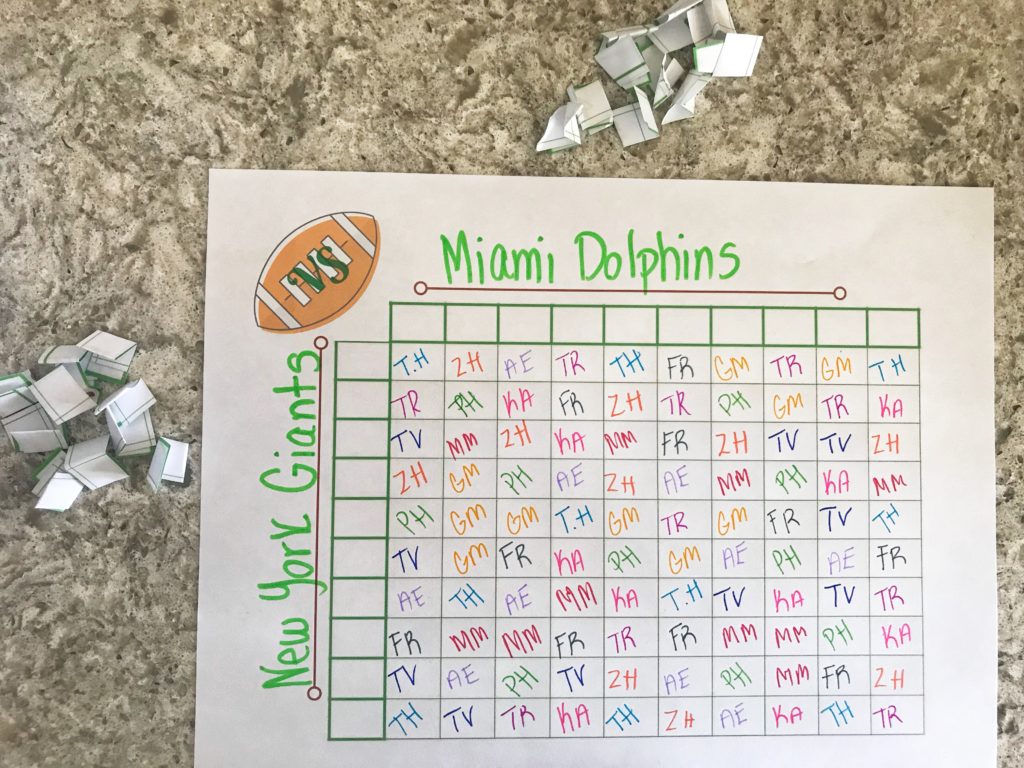 Start with the row all the way at the top of the grid. You’ll use one pile of numbers for this top row. Have someone pull a piece of paper from the pile and open it up to see the number. That number will go in the first square all the way to the left. Pick another number and place it in the second square to the left. The next number picked will go in the third square to the left and so on until all the numbers 0 to 9 are in the top row. 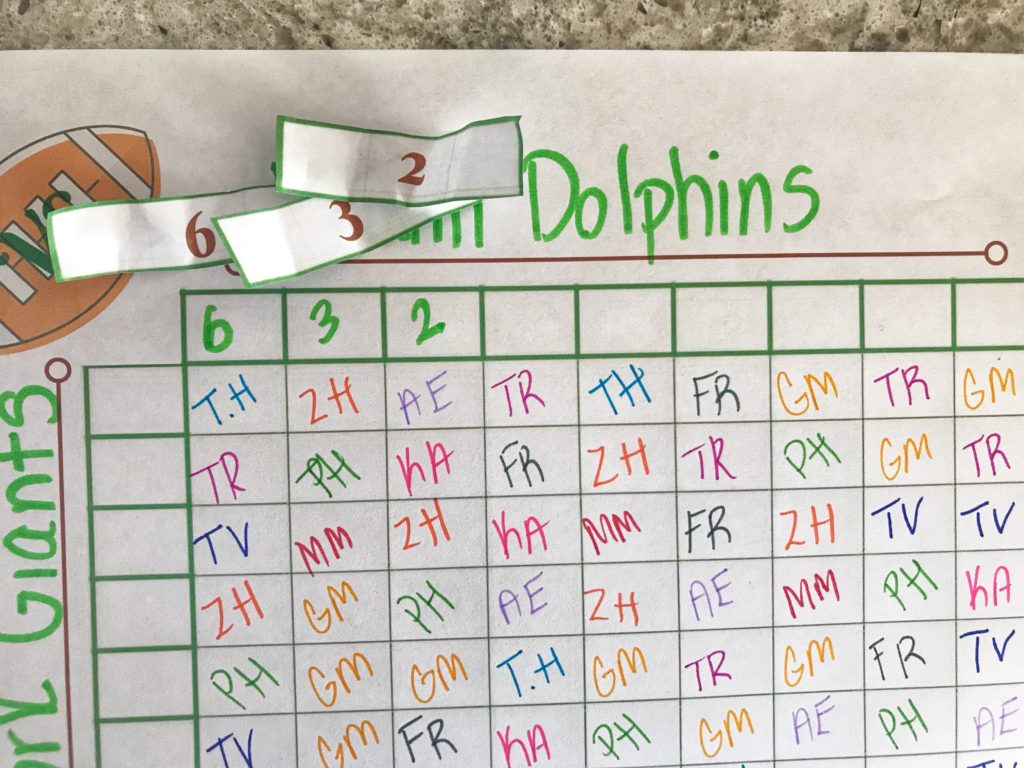 You will now do the same thing for the left column using the second pile of numbers. 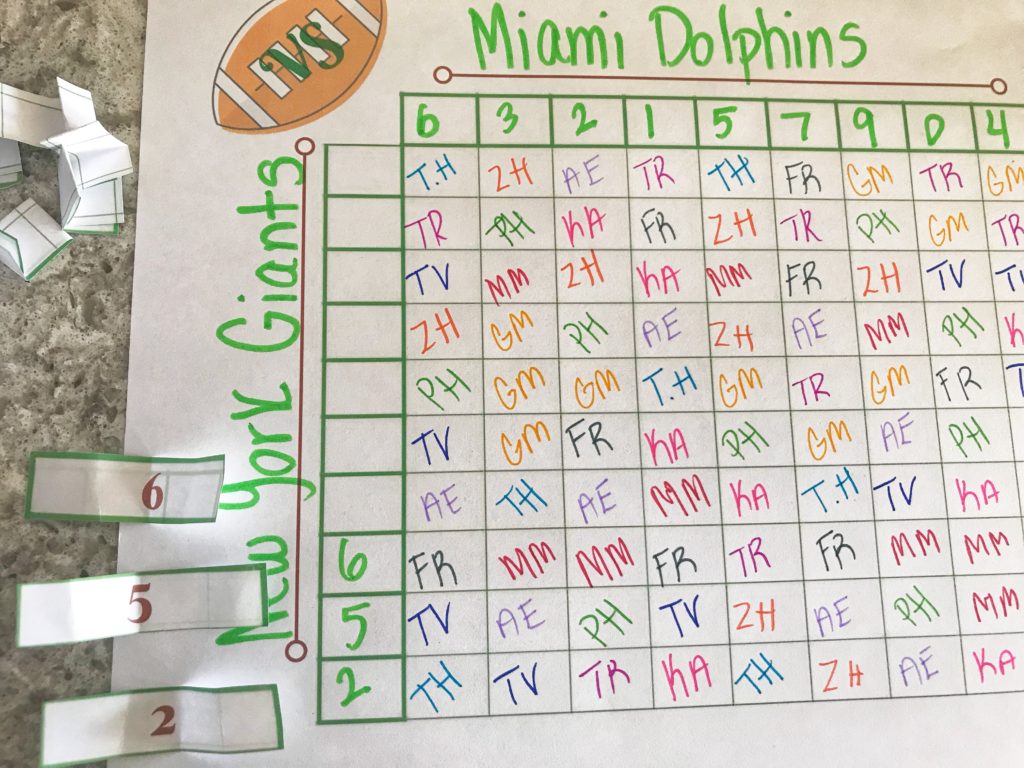 Step 4: Your game board is now completely filled out and ready to go. All that’s left is to watch the game for the winners. 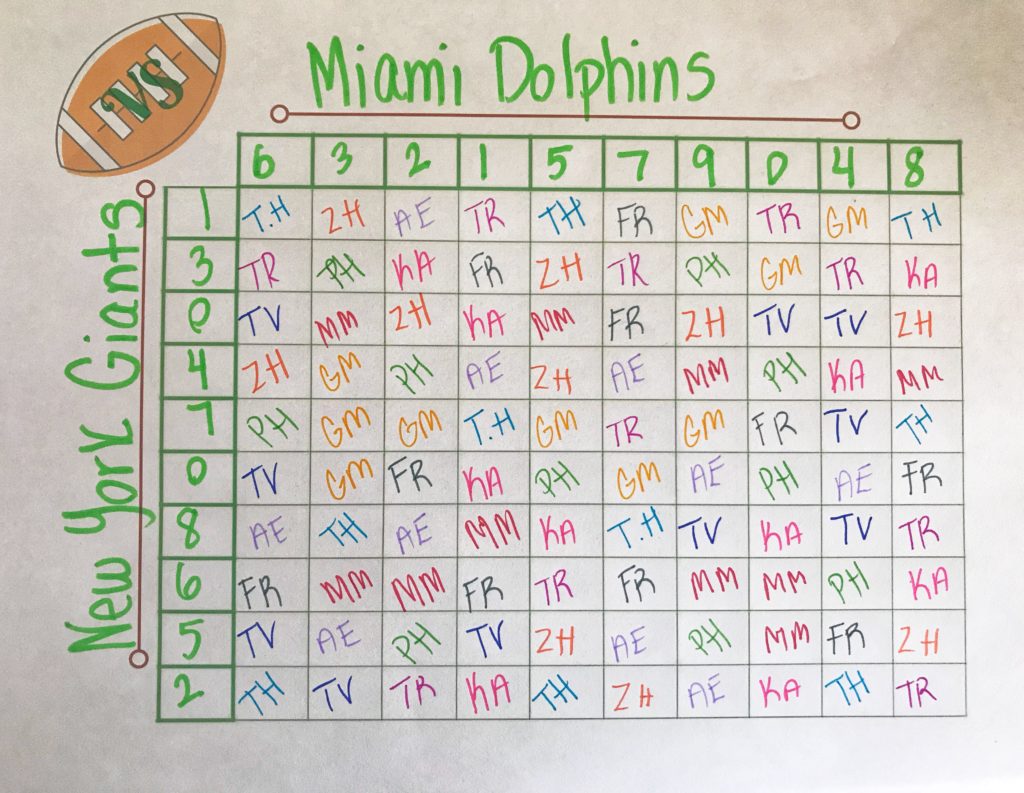 How do you win?

At the end of each quarter, you will need to look at the score. The winner is determined by looking at the last number in each teams’ score, and then matching those numbers on the grid and seeing which square intersects those two numbers.

At the end of the first quarter, the score is Miami Dolphins 14 New York Giants 3. The last number for the Dolphins is 4 and for the Giants, it is 3. You will look for the four on the Dolphins side of the grid and the 3 for the Giants and then see where they intersect. The person who purchased that box gets a quarter of the pot. You will follow the same process for all four quarters. 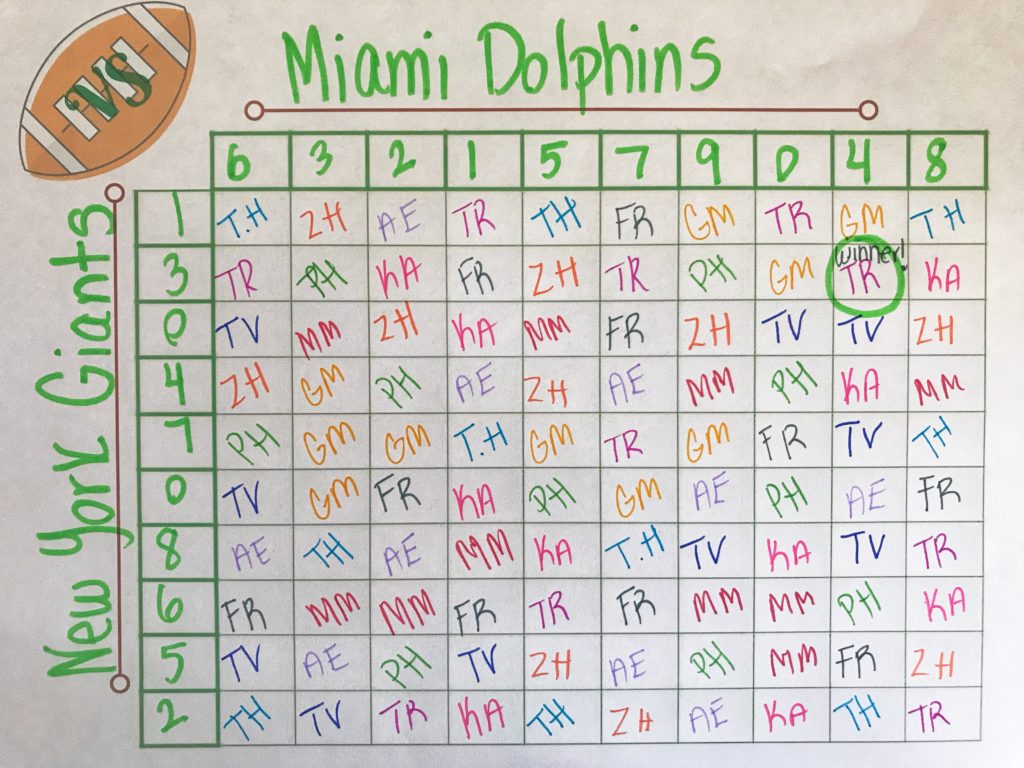 TR is the winner!

Can someone win more than one quarter? Absolutely! We have actually won two quarters in a row one year because the score stayed the same. Lucky us!

This is the perfect game for all those people who could care less about the game and only watch the Super Bowl for the amazing commercials.

For this game, you will need to print out Bingo cards for your guests. I have 24 unique cards made for you already so you’re set! 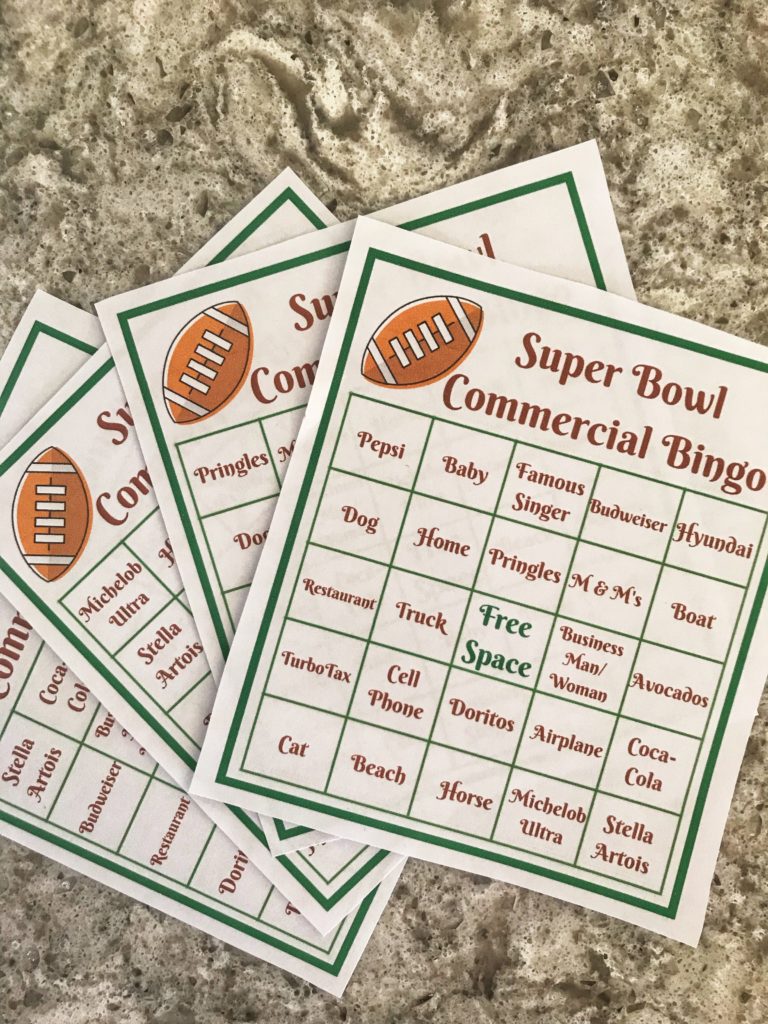 In addition to printing out the Bingo cards, you’ll want to have some way for the players to mark out a box whether it’s some cute football stickers or simply a colored marker.

A commercial comes on and there’s a dog in the backyard. The player can then place a mark in the box that says, “dog”.

The first person to get 5 in a row horizontally, vertically, or diagonally is the winner. *Last year, I had a winner in about 5 minutes…This year, I’m contemplating having the first person who fills up the entire card be the winner. 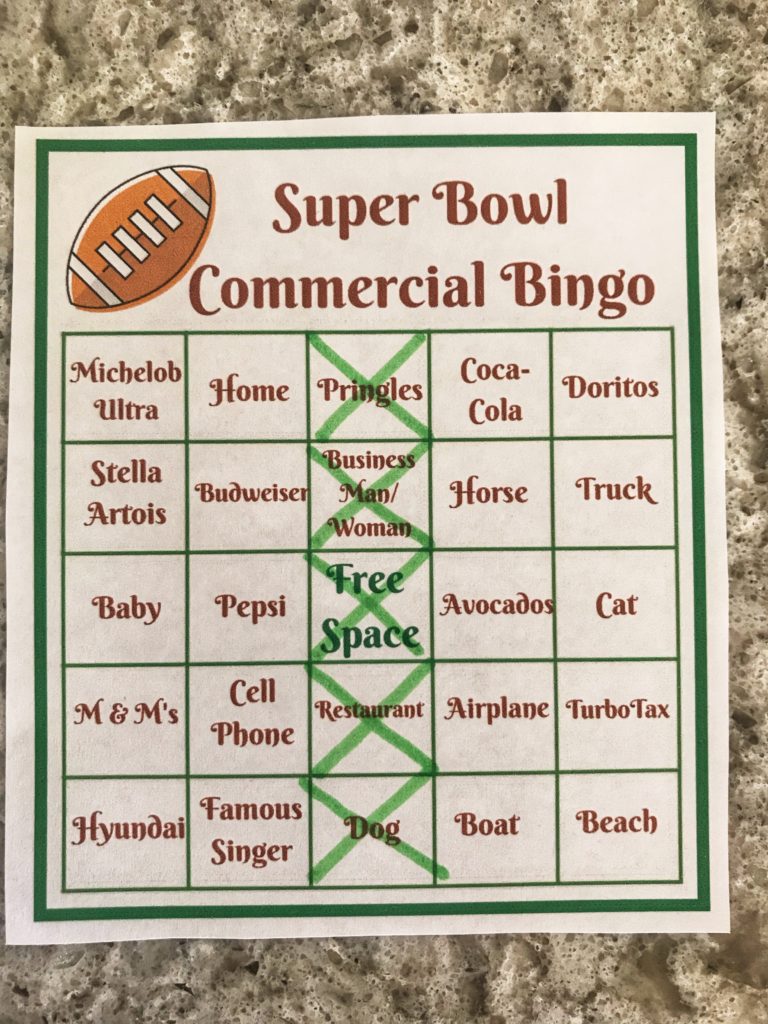 You can provide a small gift like a bag of candy for the winner! Or you can just allow them bragging rights. You know your guests best and what they’ll appreciate.

I’m so excited to play these Fun Super Bowl Games at our party in a few weeks. I love the fact that they really get everyone involved with the game and give your guests something to look forward to while watching. I hope you enjoy playing these games this year at your house. Don’t forget to sign up for the free printables using the form below.

Looking for an easy appetizer for Super Bowl. Look no further than this Super Easy 7 Layer Dip. It’s a major crowder pleaser! If you still aren’t satisfied, these Italian Party Sandwiches are to die for! 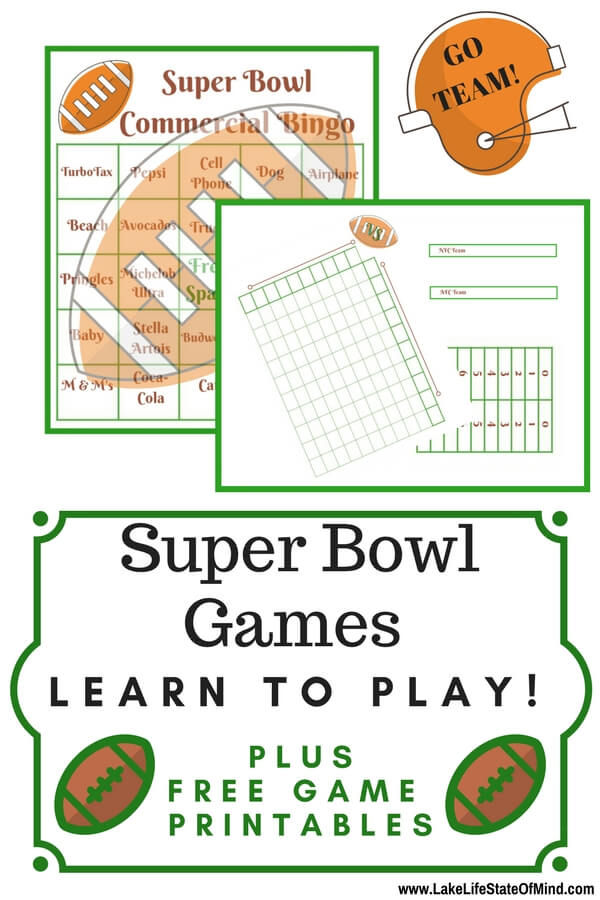