There’s no such thing as a Hanukkah without potato latkes! This traditional Chanukah recipe is a mixture of shredded potatoes, onions and a few more ingredients that are formed into pancakes and fried in oil. Wondering how to make potato latkes so you too can indulge in these fried bundles of heaven?!?! Come visit me at the lake and I’ll show you how. 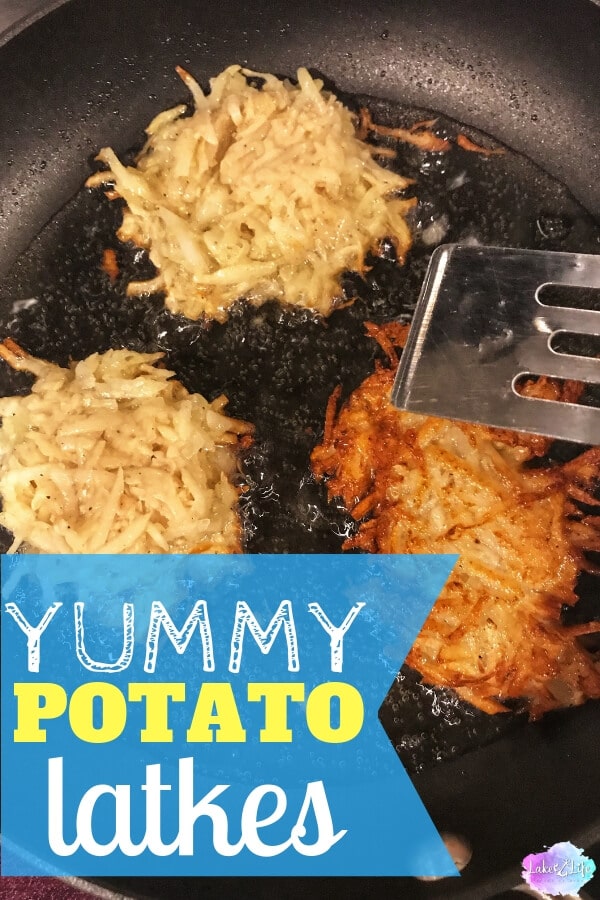 Am I the only person who struggles with their inner lazy person from time to time? I consider myself to be a very productive person, but full disclosure here, sometimes I just don’t want to do ANYTHING!

Okay, that’s a lie. I DO want to sit on the couch and watch garbage t.v. or curl up in my bed and take a nap. That I WANT to do. The problem is, there’s no room in my schedule for these kinds of shenanigans because I’m always so stinking busy.

Last night was one of those nights. As they say, the struggle is real!

Patrick was off yesterday and we had a full day planned. We had our normal morning routine of getting Zach to school, working out and showering done right on schedule. We left the house around 9 am to grab breakfast and headed to the mall to tie up some final Christmas shopping.

I won’t bore you with our entire day but we basically did a TON of running around and maneuvering through the crowds of crazy holiday shoppers. Exhausted doesn’t even begin to explain how I felt by the time we got home.

I did do one smart thing. I put together my Easy Crockpot Brisket the night before so all I had to do was put on the crockpot before we left the house in the morning and my main course was done.

That was the good part.

The bad part was I promised to make potato latkes as a side dish and I was lacking the “oomph” to want to do anything. But a promise is a promise and I knew “The Boys” would be disappointed if I didn’t make the potato latkes. They were really looking forward to them.

I finally motivated myself to begin the process of making the potato latkes but I was still struggling mentally.

Do I pull out my food processor to shred the potatoes and onions OR do I use my box grater instead? The food processor is less manual labor, but I hate cleaning all the pieces when I’m done.

In the end, I chose to use the box grater. I would like to state for the record that after sore arms, onion tears and a million dirty bowls, I was better off with the food processor.

You live and learn. Why I always tend to learn the hard way, I’ll never know.

Please don’t let my lack of enthusiasm take away from these delicious beauties. The minute I took a bite I knew it was worth every second of my time. Trust me on this one.

So what do I need to make Potato Latkes?

Begin by peeling your potatoes. As I peeled the potatoes, I placed them in a bowl of cold water. Potatoes tend to brown very quickly and submerging them in water slows down that process. 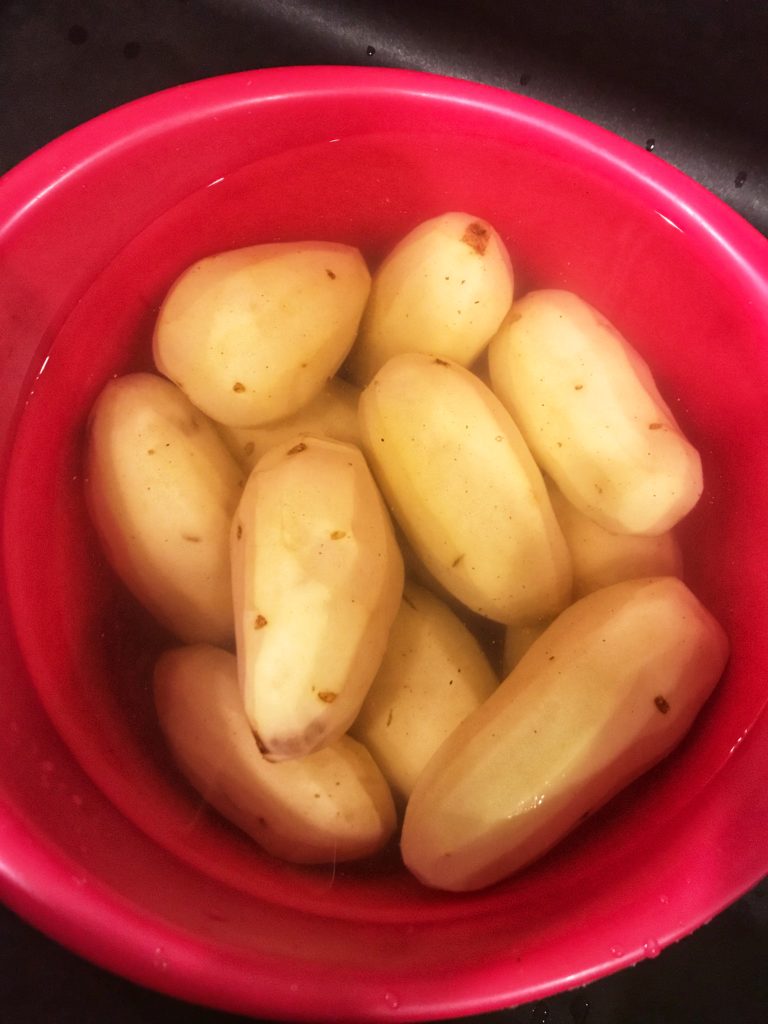 Cut and remove the skin from the onions. 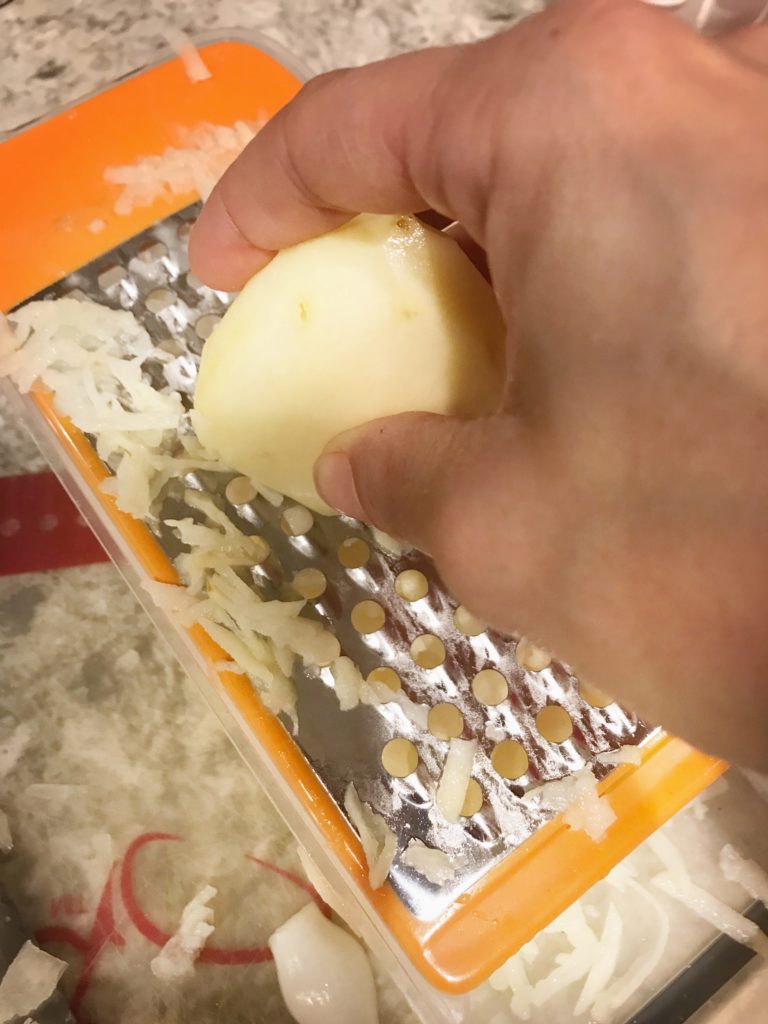 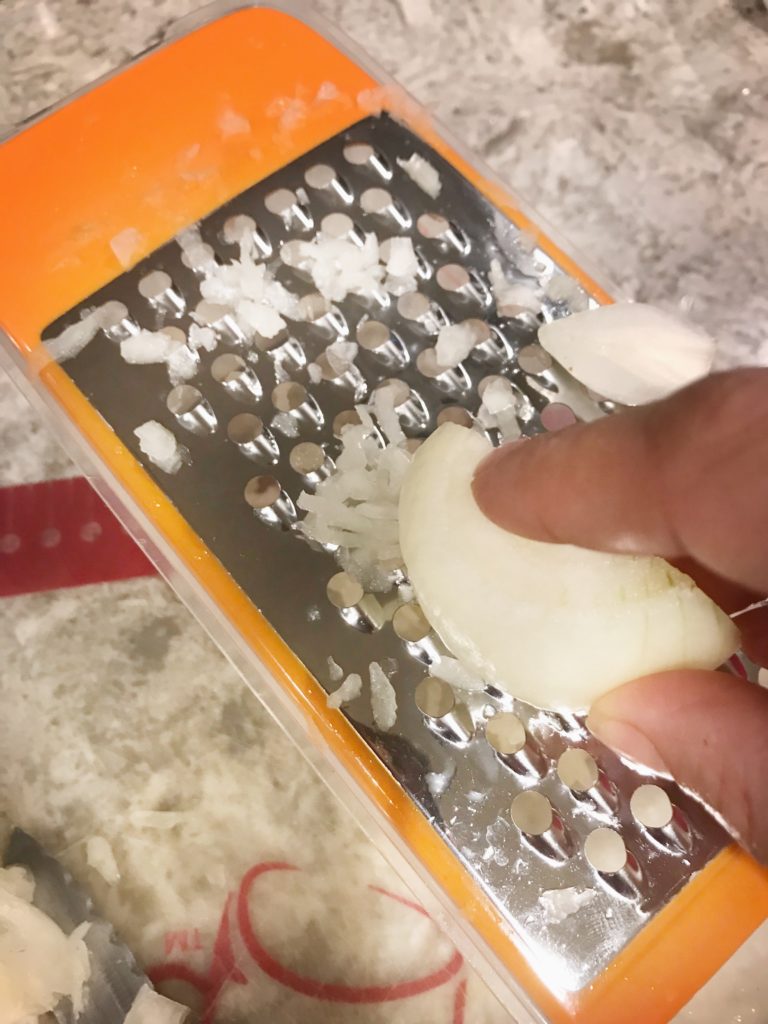 The discoloring process happens fairly quickly. Don’t worry, the potato latkes still taste AMAZING. Work quickly and you should be fine. The food processor will have the shredding done in no time. Again, poor decision on my part to go with the box grater. 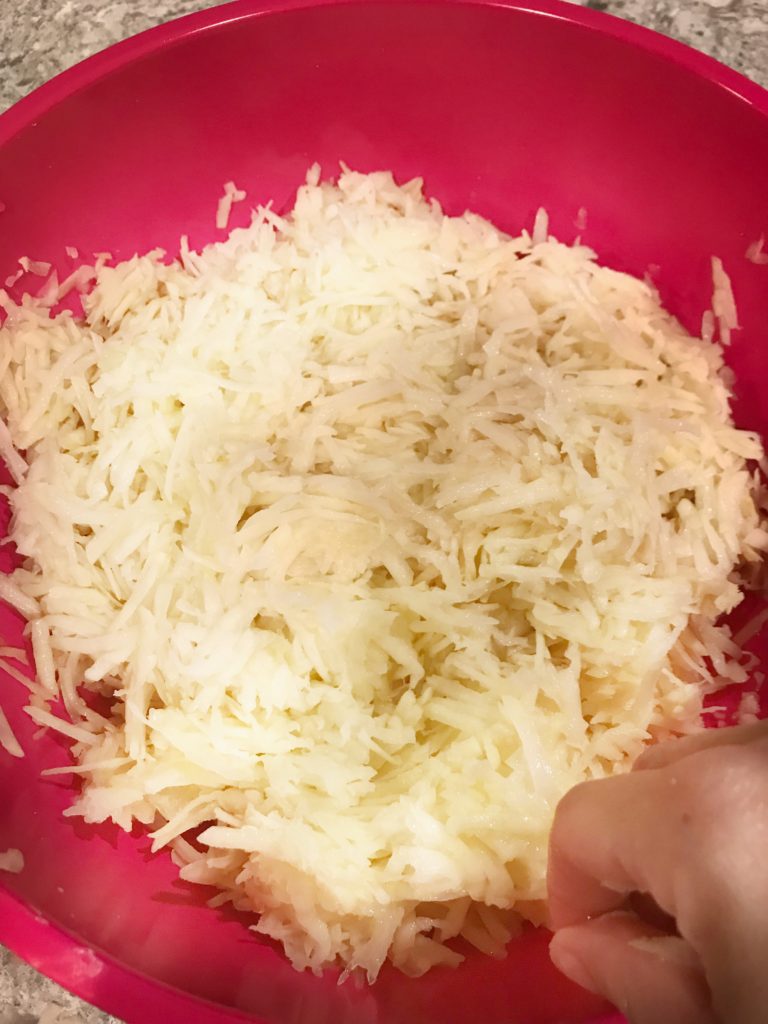 Everything all grated up!

Potatoes contain a ton of water and all that extra water will slow down the cooking process and take away from you achieving those perfectly crisp potato latkes you wholeheartedly desire. Take a kitchen towel or cheesecloth and wring out as much water as you can from the potatoes. I had so many potatoes that I did this in a couple of batches so I was confident I got the majority of the water out. 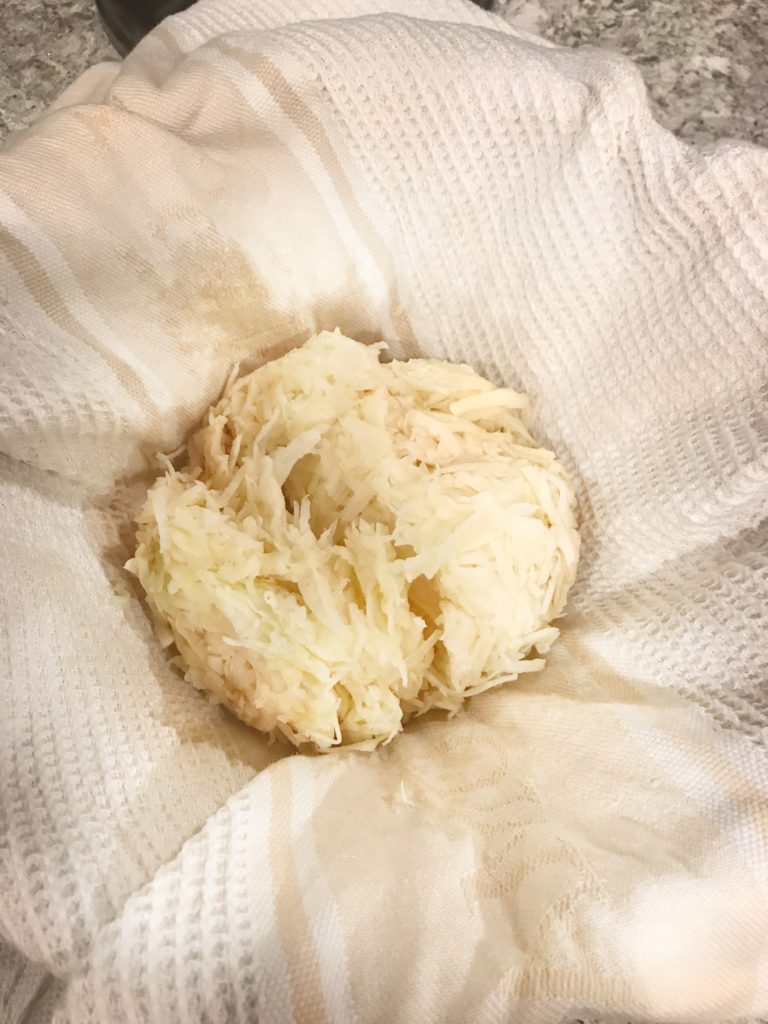 Once you have drained the potatoes, you can add your eggs, salt, pepper and matzo meal.

Note: You can find matzo meal in the ethnic aisle of your supermarket but feel free to use all-purpose flour in place of it if you’d like. 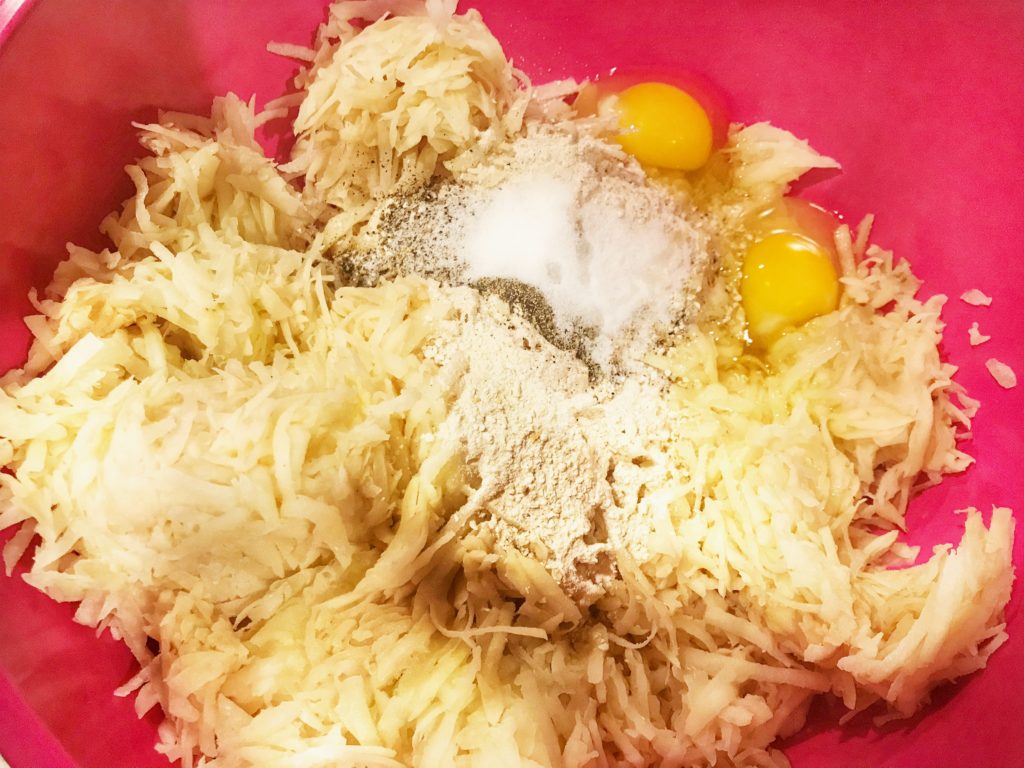 Mix everything together. I actually went in with my hands and did the mixing that way. You are trying to get a mixture that holds together nicely so when you place the potatoes in the oil they don’t just fall apart.

Pour oil into your frying pan and heat it to 350 degrees. You can test the temperature of the oil using a thermometer or just put a tiny piece of potato in there.

If the oil is not hot enough your potato latkes will suck up a ton of oil and be too greasy. If the oil is too hot, the potatoes will burn on the outside and be raw in the middle. Test one potato latke first if you’re worried about the oil’s temperature. 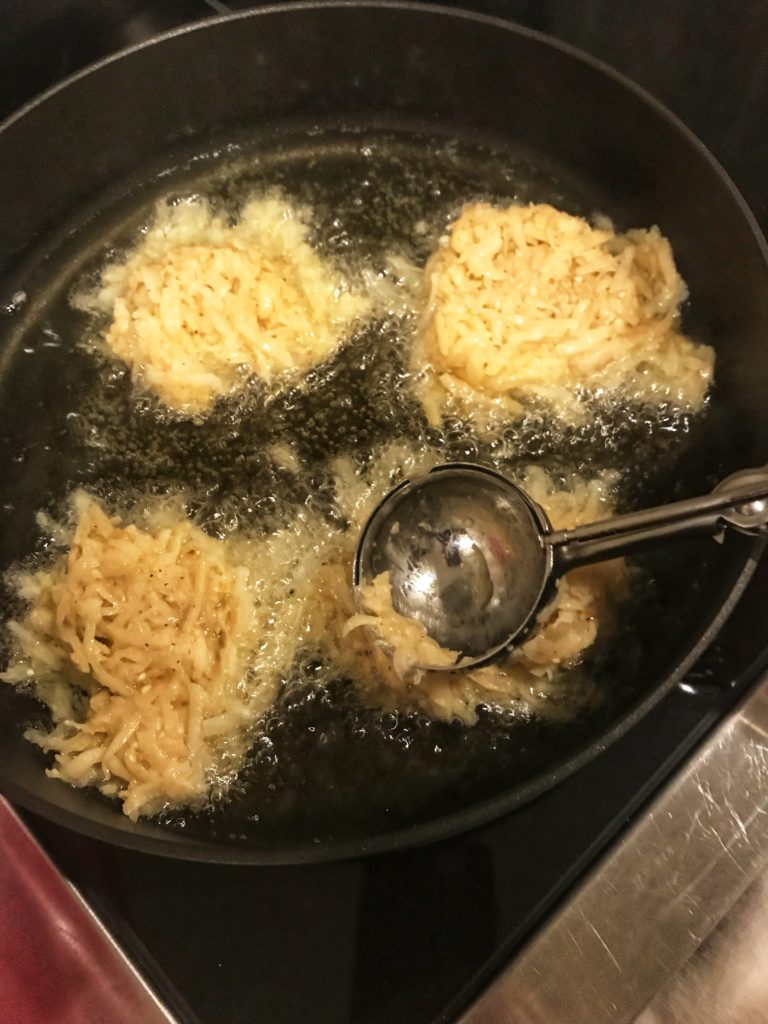 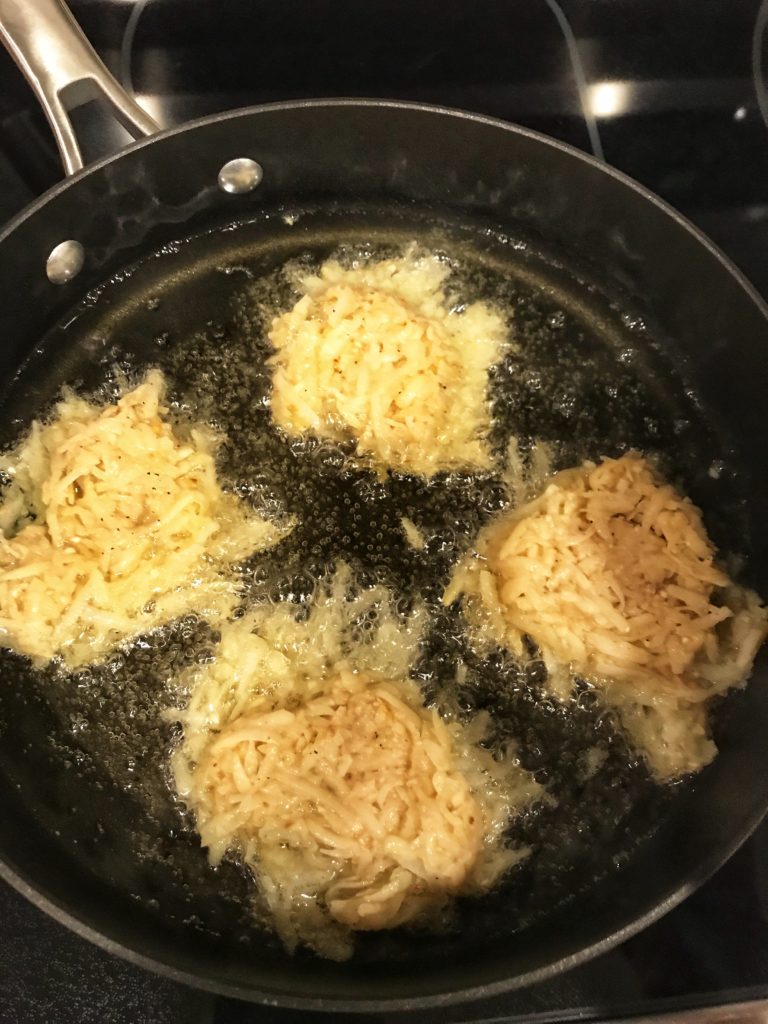 Cook approximately 2 minutes on each side. You are looking for the edges to be golden brown! 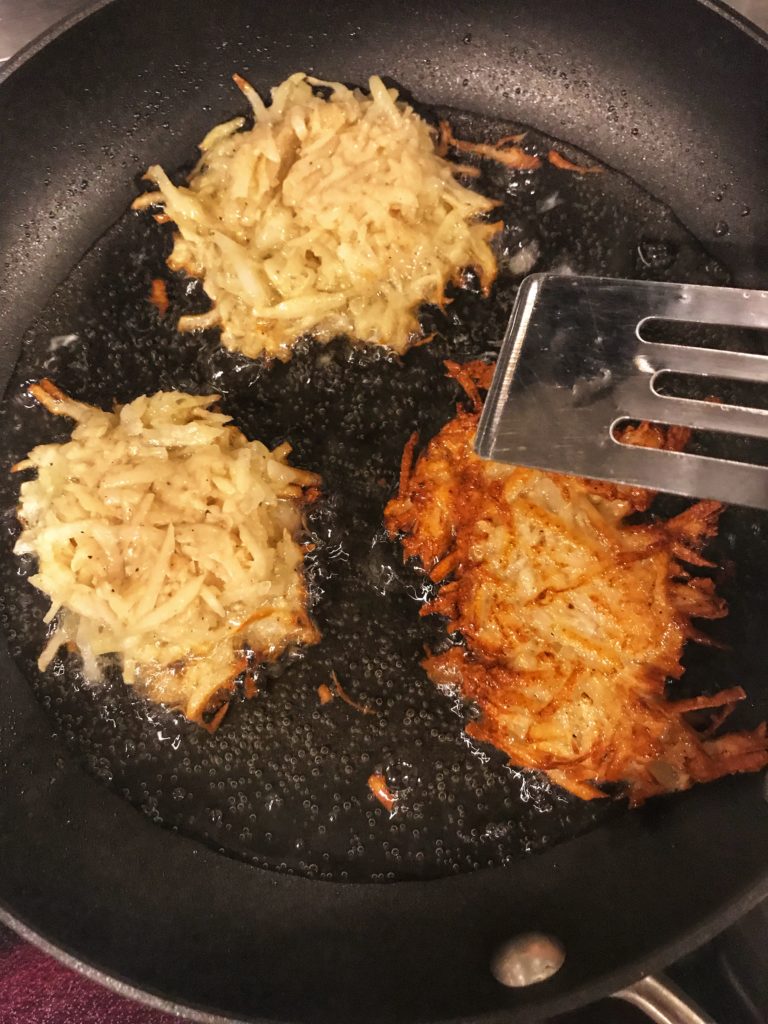 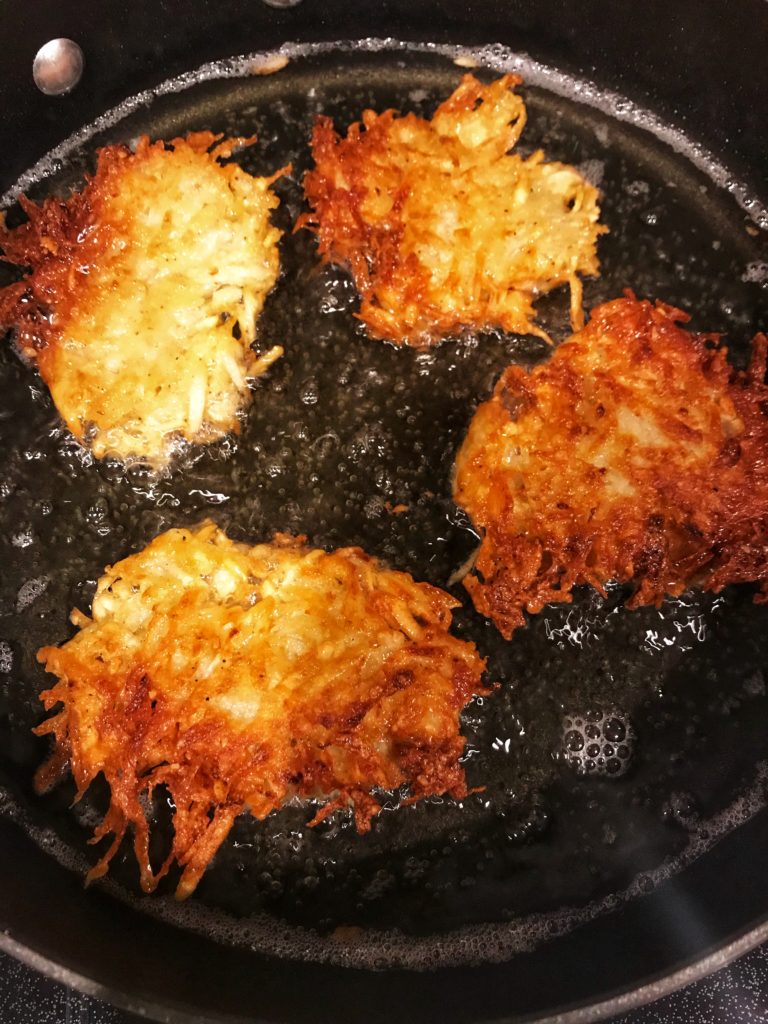 Once the potato latkes are done, place them on a baking sheet lined with paper towel to drain. 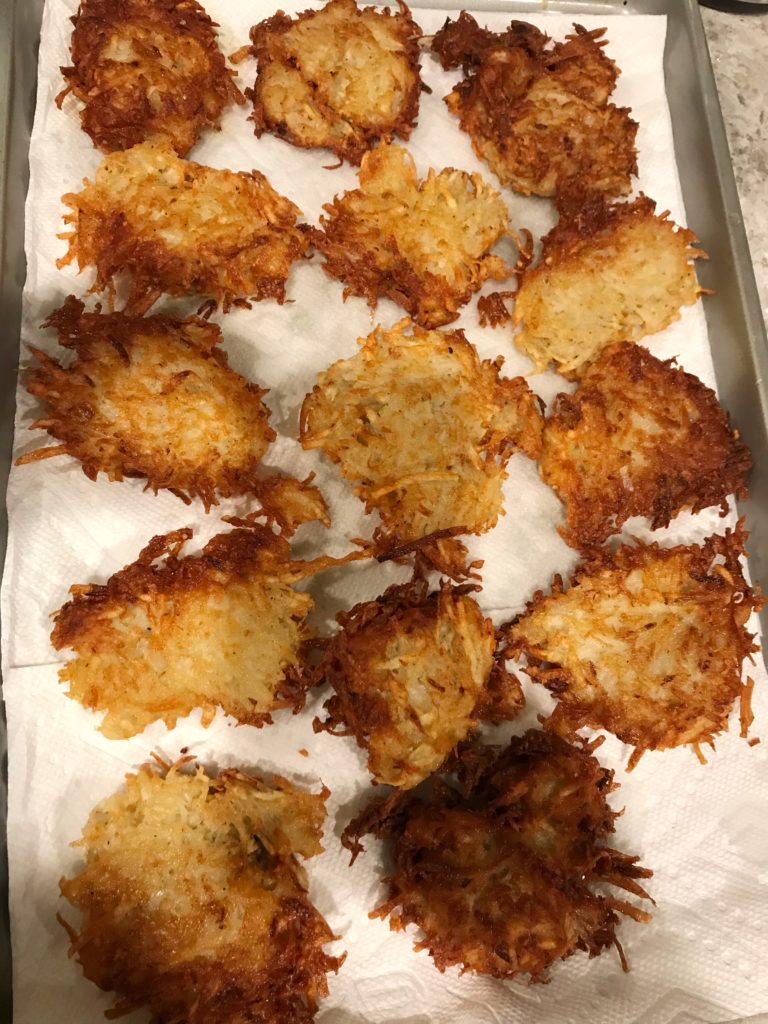 When ready to eat, serve with a side of applesauce and sour cream.

And there you have it! After everything was said and done, and we ate about 5 plus potato latkes a piece, I was so happy I bit the bullet and fought my inner lazy demons.  There’s nothing like good old fried food to get you in a happy state of mind! Plus, what’s Chanukah without potato latkes anyway?