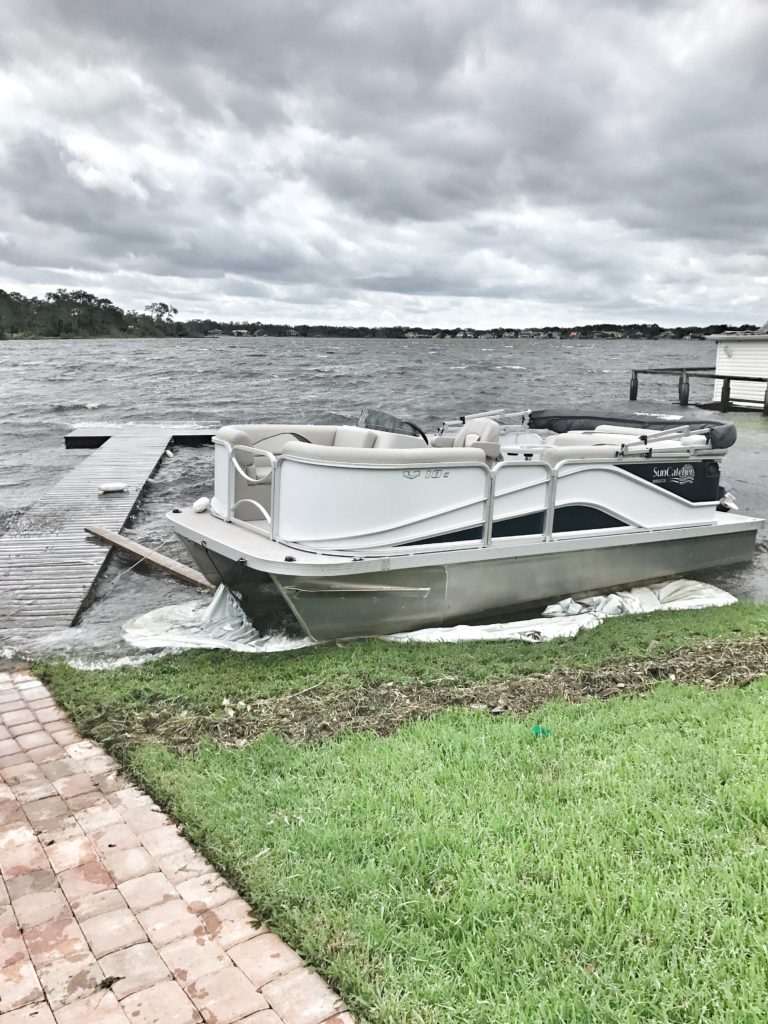 It’s Monday, September 18, 2017. The house is quiet again and it seems like things are finally back to normal. Patrick went to work this morning, Zach went back to school, and here I sit with Luckie close by typing my newest post. It was during the arrival and aftermath of Hurricane Irma last week that I have developed a newfound appreciation for my life and all it entails.

Hurricane Irma has truly become a curse word in our house…We knew she was coming and we knew we would be affected by her but we didn’t realize the damage that Hurricane Irma would have on us and the entire state of Florida.

Now I know this sounds a little naive considering all anyone heard about on the news for a week prior to the storm was about Hurricane Irma and how she was going to rip through Florida. Honestly though, for Floridians, hurricanes are part of the territory. We hear about them all the time and it’s usually just a bunch of rain and wind which we are used to.

But Hurricane Irma was different. You can read more about this in my blog post, The Calm Before The Storm | Awaiting Hurricane Irma.

Hurricanes tend to be pretty unpredictable. They are affected by so many things such as wind, land and water temperature. Hurricane Irma was no different. She moved all over the place. I feel like at one time or another every part of Florida thought they were going to have a direct hit from the storm.

It wasn’t until just a few hours before the storm was about to hit our area that we learned the eye was going to be coming directly over us. Although it was only a category 2 storm at the time, the worst of the storm is around the eye and we knew we would get hit hard. It was at that point that the reality of things set in along with our nerves. Unfortunately, though, all we could do was sit and wait.

Around 8:30 pm on Sunday night our lights started flickering. We expected that the lights would go out so we had a plan to blow up our air mattress and “camp out” in the family room overnight. We started getting the room together with all our things including candles, flashlights, and board games. The power officially went out at 9:30 pm on Sunday evening. We pulled out the Monopoly board and had some “good ole’ fashion” family time.

You would’ve had no clue a hurricane was about to arrive in a few hours. 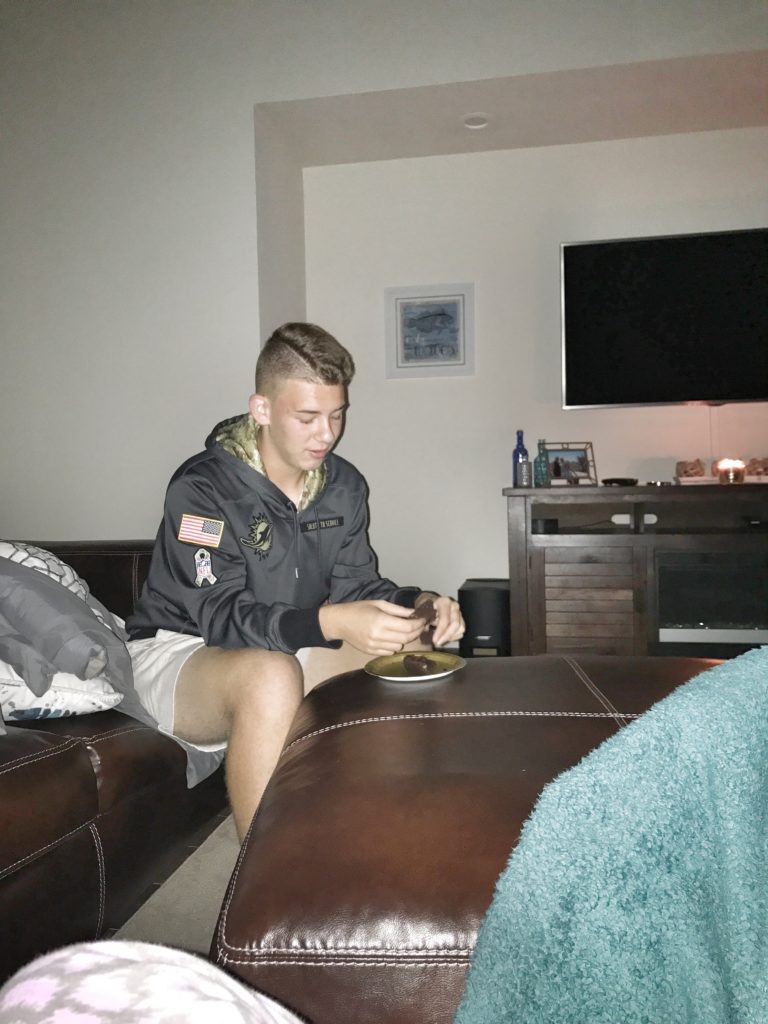 Zach eating his brownie and getting ready to play Monopoly.

We decided to go to bed around 11 or so only to be woken up around 12:30 am to the howling of the wind. There was water leaking from pretty much every window and doorway in the house. We also had a leak coming from the roof in our attic into our garage. Patrick and I grabbed towels for the windows and doorways and then he put an aluminum tray in the attic and things seemed to be okay. We finally fell back asleep. 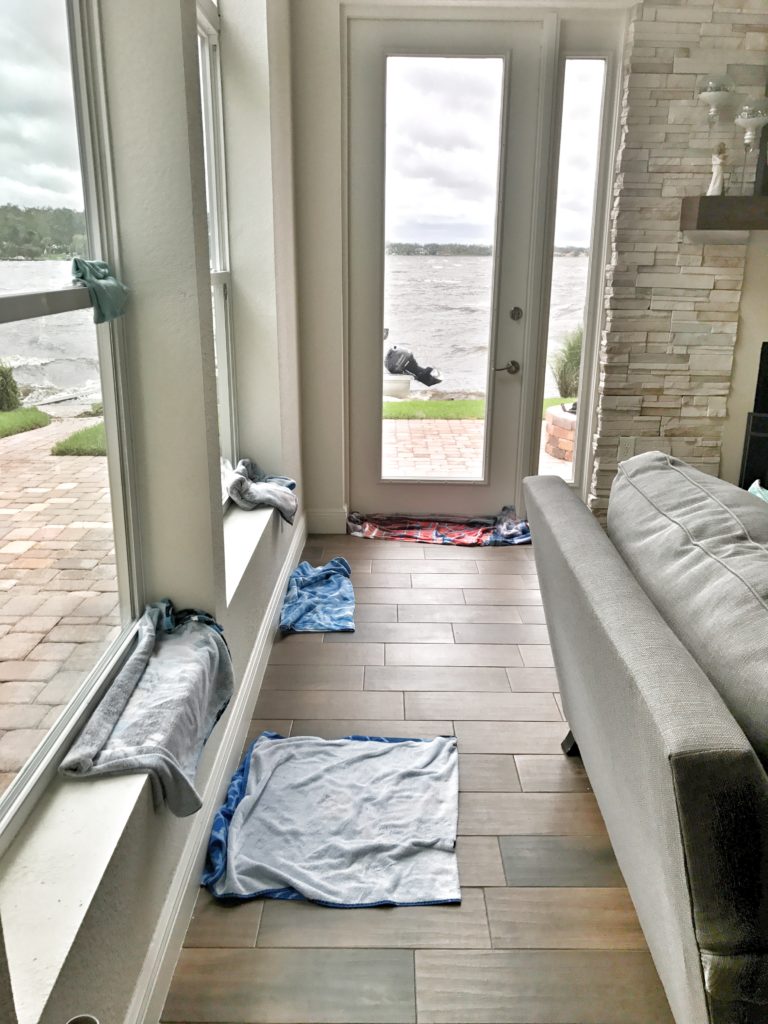 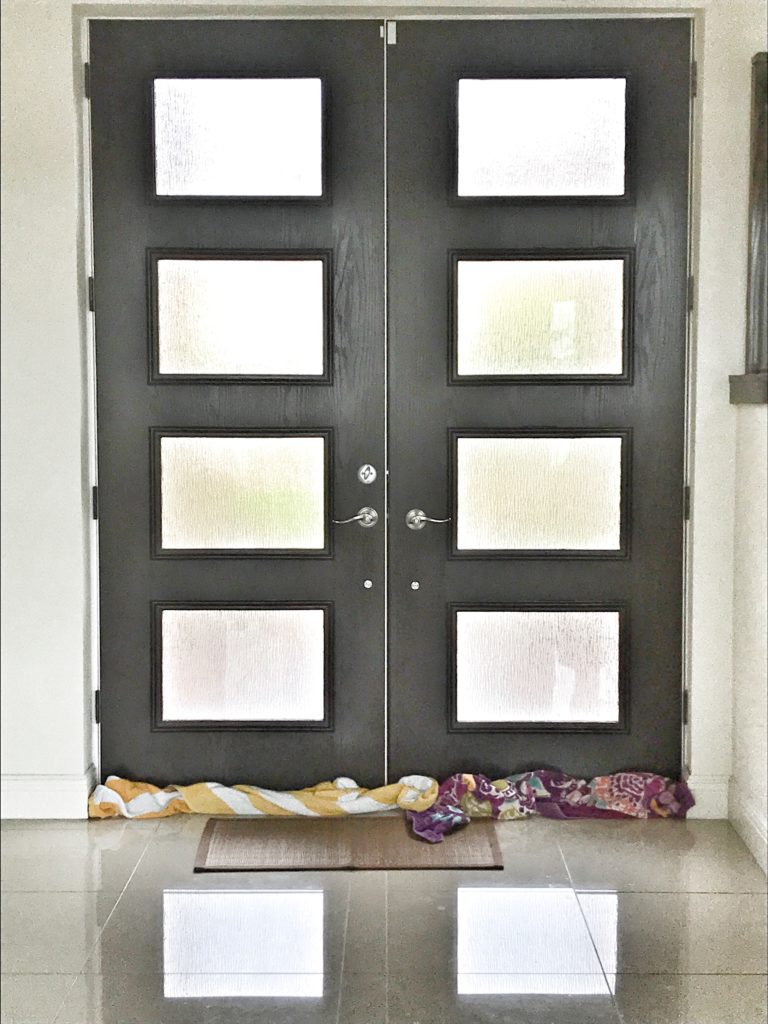 We woke up around 6 am on Monday morning. Our pontoon, that usually sits vertically on our dock, was now holding on by one rope and laying horizontally across our back yard. The lake was gushing straight at our house with waves crashing over the boat and halfway up our lawn. It was a scary sight.

We were convinced that one more big wave would send our pontoon right into our house. Thankfully that never happened. The abandoned boathouse next door suffered a ton of damage. The worst part is that much of the wood that fell off the boathouse ended up on our property. 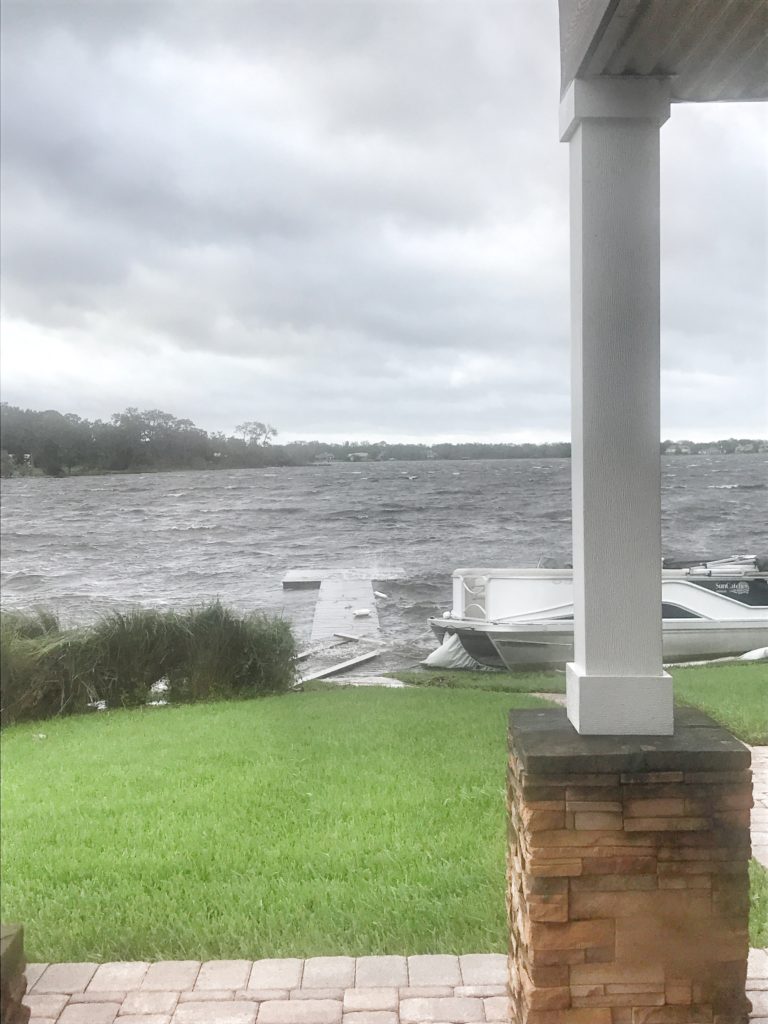 We were finally able to go outside a little later in the morning and assess the damage. All and all we were extremely lucky. The pontoon made it through Hurricane Irma with only a ripped boat cover and torn off ladder.

We lost a few shingles from our roof and had a tree fall down. The lake water covered our boat dock and dislodged some of our brick pavers on our walkway. Tons of grass and hydrilla swept up onto our property which was a pain to clean but we were very lucky that was the worst of it. 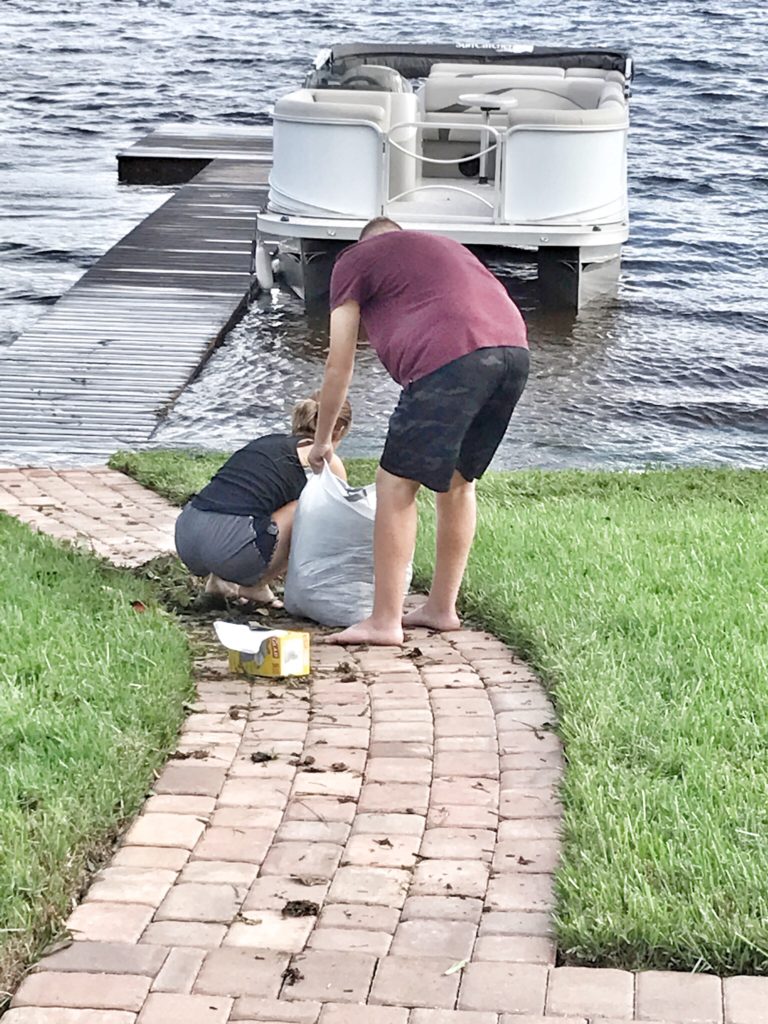 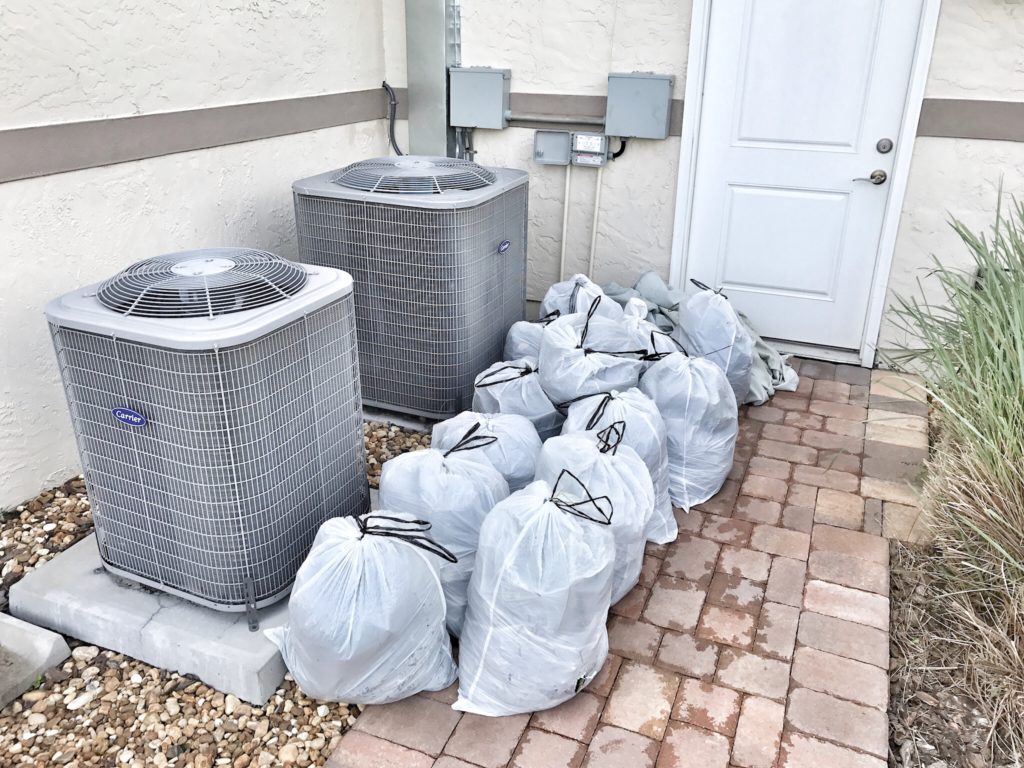 That night, Monday, we pulled out our tailgating grill and had hot dogs, canned corn and chips. We decided to play another game of Monopoly and call it a night. 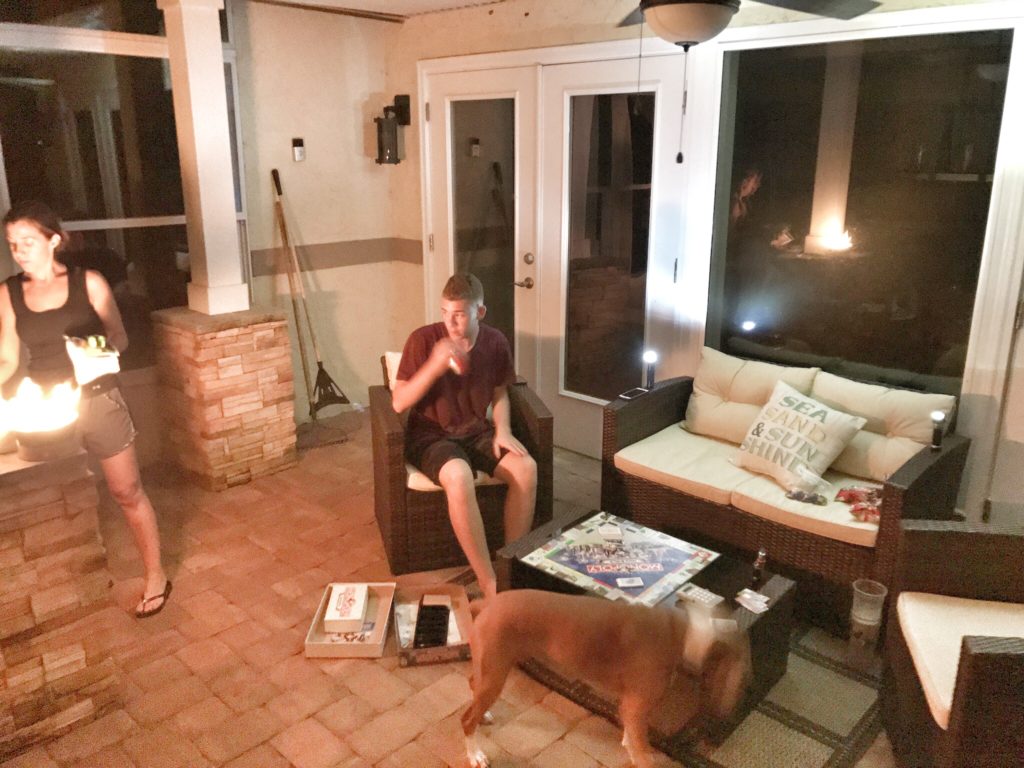 Tuesday rolled around and Patrick was headed back to work. School was still cancelled for Zach. He had no school the Friday before Irma hit and was still off through Tuesday per the school district. We did some work around the house until it got too hot without air conditioning. We bummed around the house and took a few drives around in the car with the dog to get some AC and cool down.

Later on that afternoon, we received a call from the school district that school was cancelled through Thursday due to 66 schools still not having any power. We still didn’t have power but we were confident we would get it back soon since most of our friends had gotten theirs back by now.

One of our friends had a generator he didn’t need anymore because his power came back on so he brought it over for us to borrow that evening. Unfortunately, it was too late for our refrigerator to be saved but it allowed us to connect a few fans to sleep better that evening.

It was now Wednesday and we were still without power. What the heck is going on?!

The sun was beaming and the house was getting hotter and hotter. Luckie was miserable! She did nothing but pant all day and night long. We didn’t want to go too far from our house because we couldn’t set our alarm and were worried about our safety. Also, we didn’t want to leave Luckie at home so we could only drive around in the car because we had her with us.

When was the power going to come back on?! 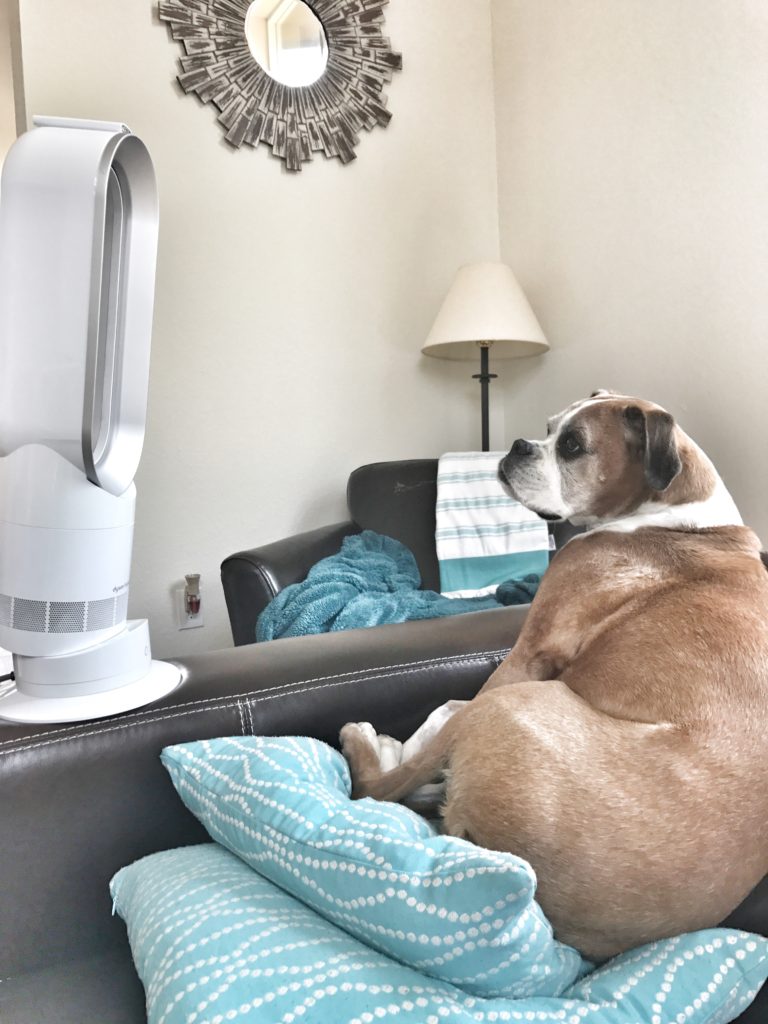 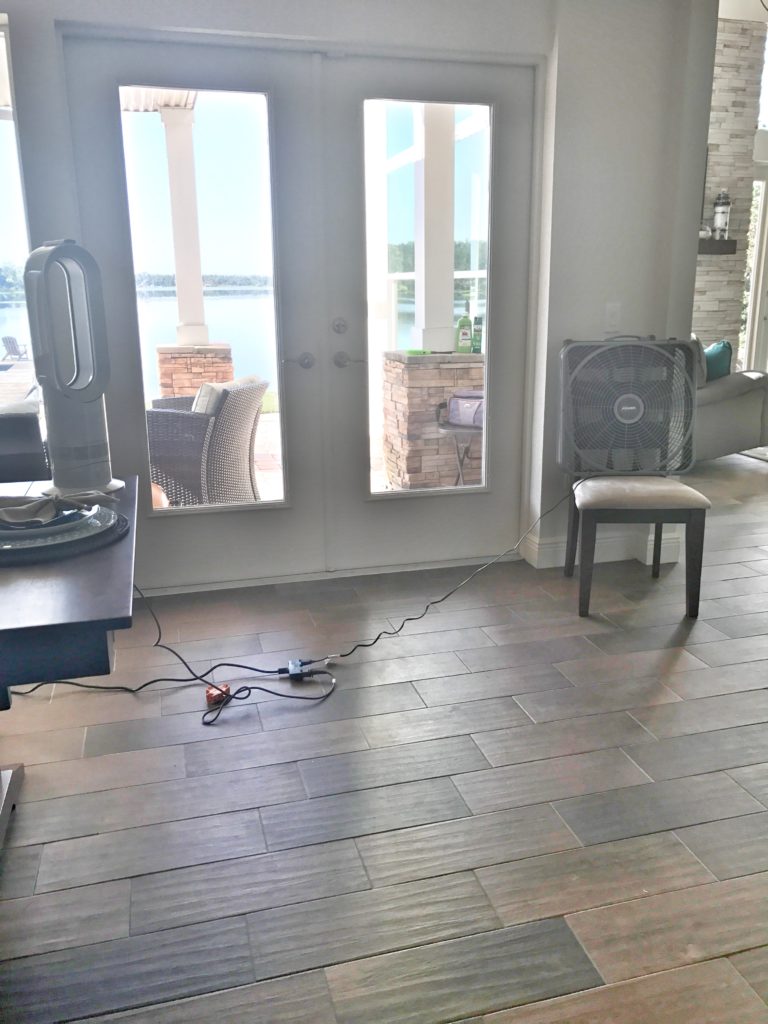 Thursday came and the power was still not on. Can you believe it?!

My stomach was in shambles by this point. All I wanted was a salad and a bowl of fruit. Thank God for my mom who surprised us and came by with coolers of food. I almost cried when I saw she had bought fresh fruit and salad for us. Yes, I know I am weird, but you don’t realize how much you miss those things when you are without them for so long. 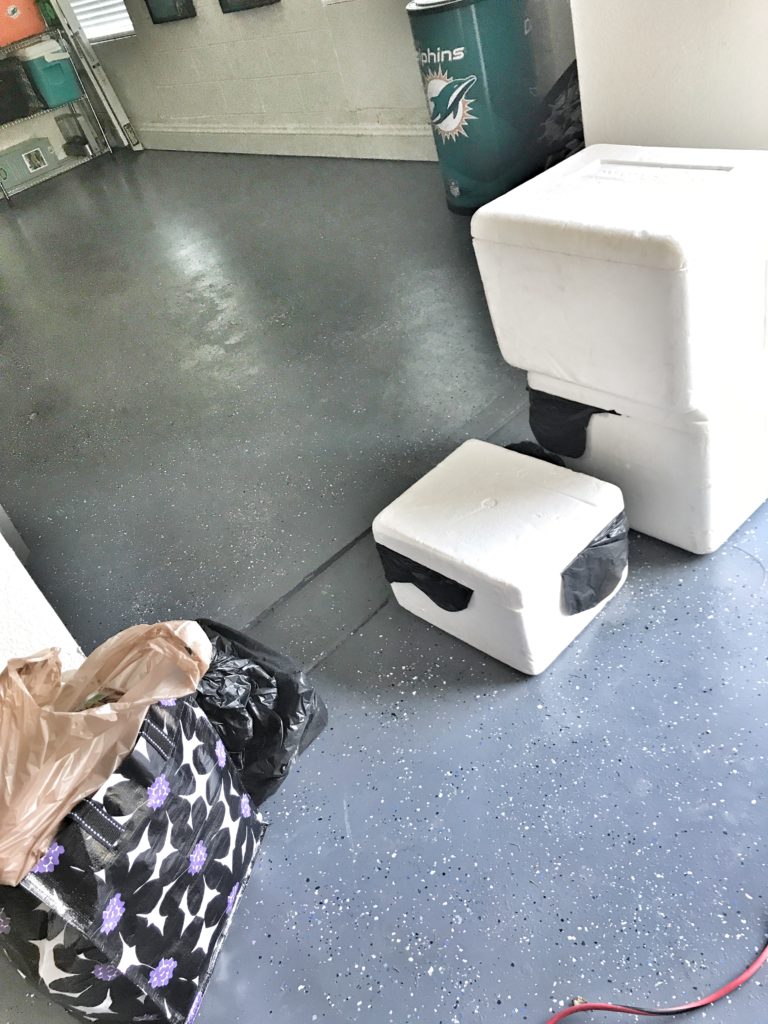 Zach and I were getting pretty good at entertaining ourselves throughout the aftermath of the storm. We would talk, read, watch YouTube videos and relax. I have to say, he was quite the trooper during this entire process. He was so laid back and easy going about the whole thing. That afternoon we received another call from the school district and school was canceled on Friday due to power still being out throughout the county.

Thursday evening was fast approaching. I was starting to panic thinking that we would be going another night without power. My house was disgusting at this point. I had a ton of dirty towels to clean, my floors were gross, the house smelled like dog, and I was ready to cry.

At around 5:30 pm that night the power FINALLY came back on. It was officially 92 hours without power. Once again, I almost cried. I immediately turned on my washing machine and started cleaning up around the house. The thermostat upstairs read 88 degrees when the power finally came back on! I don’t know how we did it but we did. 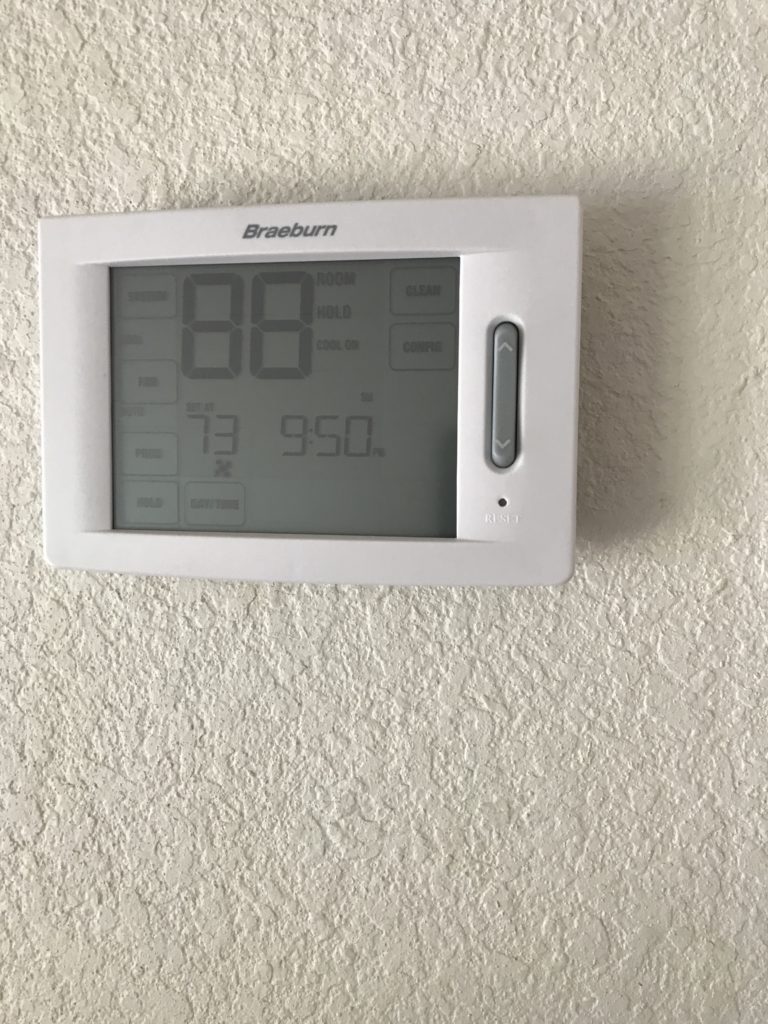 By Friday the house was cooled down and the refrigerator and freezer were ready to be stocked back up. Throughout the course of the weekend we continued to clean up around the house and outside as well. Yesterday we lounged around in the afternoon and did nothing but watch football. I made lunches for the boys and prepared to start a fresh week. 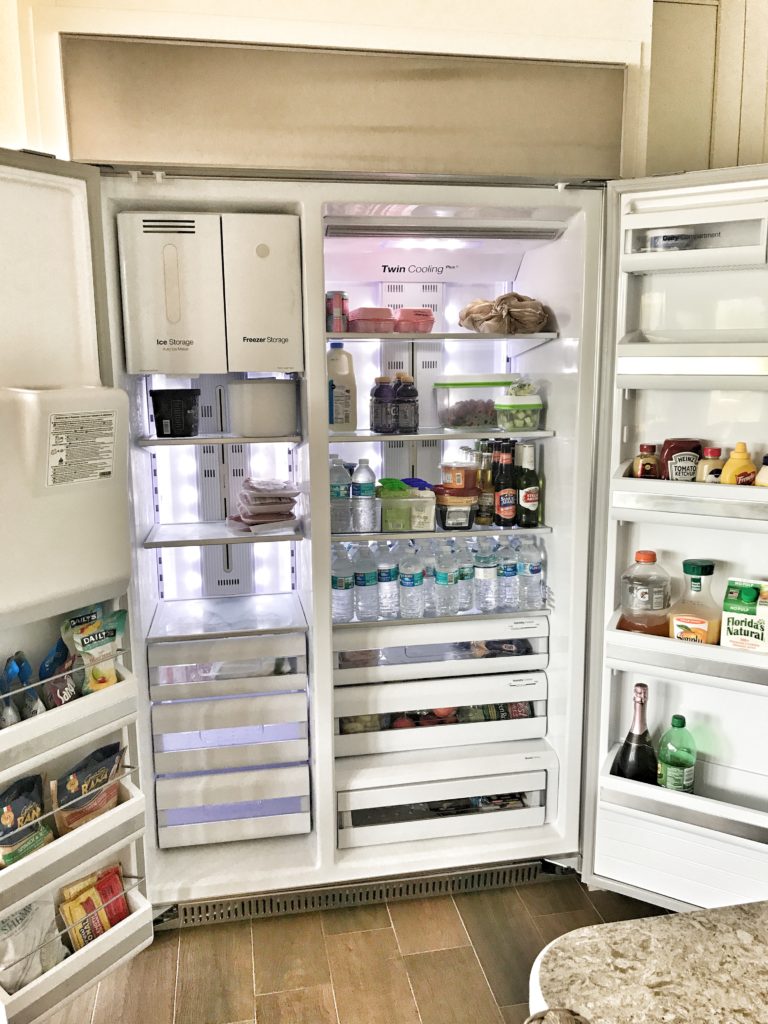 6:00 am came quickly this morning. Although it was early, it was nice to get back into the swing of things and have some normalcy around here. I will miss the time I had with my family though. It was nice to be disconnected from the technology that consumes us on a daily basis and really focus on one another.

Hurricane Irma has given me a newfound appreciation for the simple things in life. I can’t even imagine the people who live without power or food on a daily basis. It makes you put things into perspective. I could barely last 4 days. Maybe this was the universe’s way of bringing me back to reality and showing me what’s really important in life.

Message received! Universe…Maybe you can spare us next time you decide to make another hurricane. Just a thought 🙂