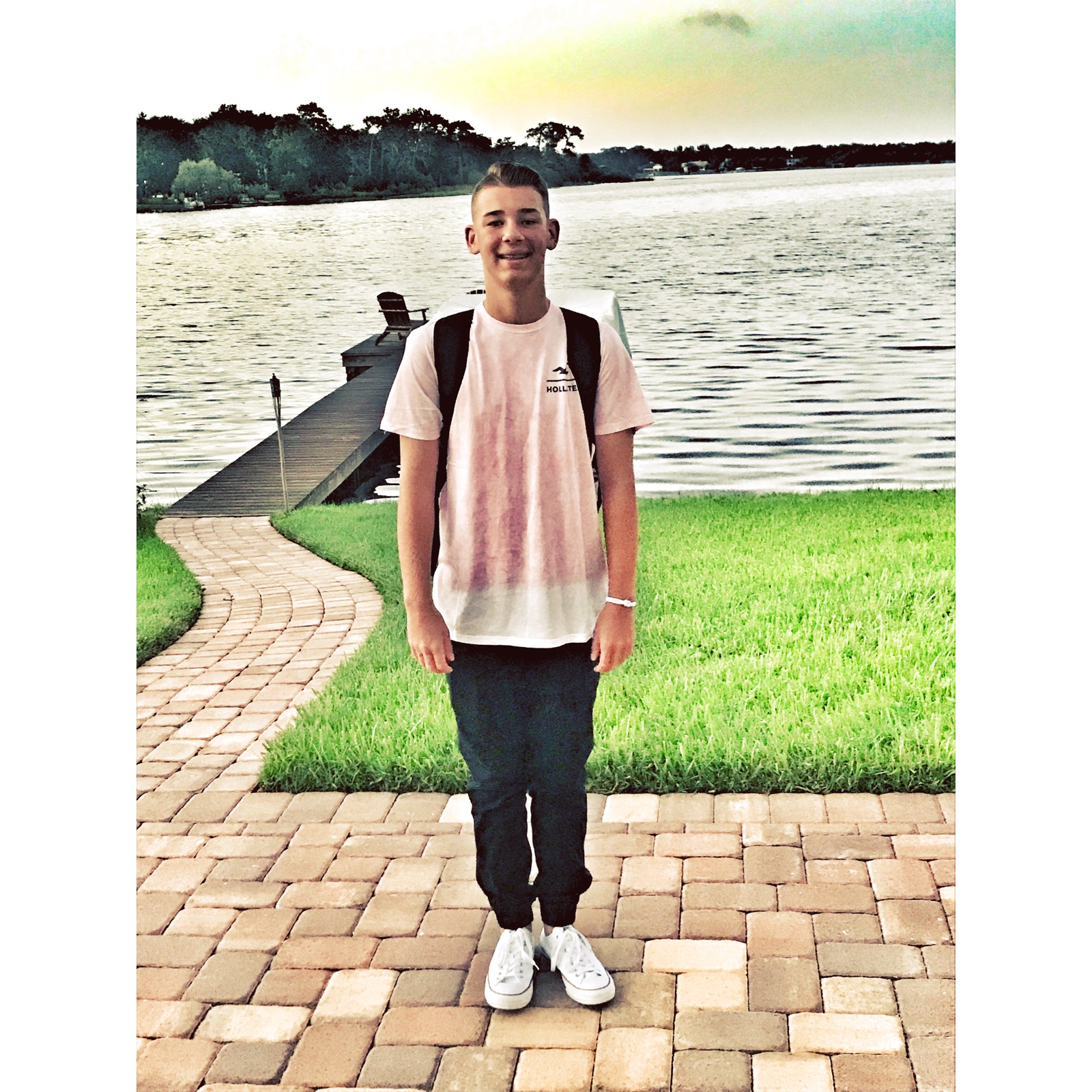 Yes, you heard me right! It’s official. I am now a mom of a high schooler and a full-time blogger. How do these two things go together? Very easily actually once I connect the dots for you.

Let’s start from the beginning. The waaaayyyyy beginning.

I was a hostess at T.G.I.Fridays back when I was in high school. I worked there since I was 16 and knew my job like the back of my hand. I was, and still am, a hard worker who always did my job and in return, I was given more responsibility and more authority than all the other hostesses. I worked there for so long I basically walked around the place like I owned it. In hindsight, as I’m writing this, it sounds pretty cocky but nonetheless, it was true.

Fast forward two years and I am now 18. I’m still working at Friday’s and I’m still the hostess. I am getting myself ready for my shift on a Saturday morning wiping off menus, cleaning windows, and labeling my floor plan with the servers’ names. As I am writing down the servers’ names for their sections I come across a name I’d never seen before… Patrick. Patrick??? Who is Patrick and how come I wasn’t told we had someone new! No one comes to work here without me knowing about it! Hahahaha.

Of course I had to introduce myself and learn more about this Patrick guy. Turns out he only worked the day shift, Monday through Friday, and since I was in high school I only worked evenings and weekends. He never worked the weekends but covered that Saturday morning shift for someone else. Fate? I found out that he not only worked for Friday’s but he was a bouncer at a club on Ft. Lauderdale Beach. This particular club was 18 or older which meant I was able to get in with no problem but my best friend at the time was still 17 and couldn’t. This Patrick guy seemed to be a good connection to have! Sometimes I just laugh at my high school mind…

A few weeks later I asked him if he could get my friend into the club and we made plans to go with him and his friend over the weekend. But a couple days before we went to the club, on April 23, 2000 to be exact, we had our official first date at his apartment to watch a movie. And just like that, we became a couple.

When we met I was only a junior in high school. I dated Patrick all through the rest of high school. My senior year I was accepted to the University of South Florida in Tampa. Go Bulls! Patrick decided to come with me and we moved into our first apartment together in Tampa over the summer of 2001. Side note, I transferred to the T.G.I.Friday’s in Tampa when I moved…apparently I enjoyed wearing goofy hats and “pin crazy” suspenders! Thank God they do not do that anymore. It was at that time that I started my college years and tried to focus on becoming an Elementary Education teacher. I finally graduated in 2006. Yes, it took me 5 years but I was busy during college!

Patrick and I got married in 2002 at the very MATURE age of 20 and had our son, Zachary, the following year at the age of 21. At the time we knew everything of course. Looking back, we knew nothing! Now that Zach is 14 I can’t believe that if he follows in our footsteps he could possibly be with his “forever love” in four more years. It’s too much to take in! We would support Zach if that was ultimately the decision he made, but now as parents, we agree that we were WAY too young. Funny how that works, right? Marriage is hard people! We navigated through many curve balls while still trying to grow up ourselves. I wouldn’t change it for anything but I would be lying if I said the journey to get to where we are today was “a walk in the park”.

So now fast forward a bit…

It’s been 17 years. Patrick and I are 35, yikes! Still not old enough for a high schooler, right? Seriously I feel like I was just in high school and we were dating! Yet today we dropped off OUR 14-year-old son off at high school to start his Freshman year. How could this be? If only time could stop, if only for a little bit. But it can’t and that makes my heart hurt.

Being a teacher, I have always had the luxury of having Zach close by. During Zach’s elementary school years we went to school together actually. I was never his teacher (total conflict of interest) but he was always close enough that I would be able to see him multiple times throughout the day and I knew everything that was going on within his classroom considering his teachers were my colleagues.

When it was time for middle school I bet you’ll never guess what this mom did??? Wait for it… I added an additional subject area to my teaching certificate so I could be eligible to teach at the middle school level. As Zach would say, “That’s totally cringeworthy, Mom”. Yes, son, it is! In my defense, I did not go to HIS middle school but rather to another middle school in the area. This way I gave him room to breathe but still knew the ins and outs of middle school. Can you see how I tried to sell that one to him? It kind of worked.

The next three years came and went. The reality that high school was banging on the door hit me like a ton of bricks. So what did I do? Don’t laugh when I tell you this but… I added another subject area to my teaching certificate so I could teach at the high school level. Pathetic, I know. Very few people know this but I actually applied for a position at Zach’s high school doing the same thing I was currently doing at my middle school. Two interviews later, and honestly convinced that I got the job, I was devastated to find out the principal had already filled the position I applied for with someone from his old school. Blessing in disguise? I’d say so.

What was I going to do now?

I thought I might have the answer. Recently I had been reading up on blogging. One day while I was skimming through my Pinterest feed I came across a pin about the topic. I clicked the pin to read more about it and was shocked that people can actually make a living doing this. I’m not sure how familiar you are with Pinterest but once you click on a pin you usually receive similar pins on your feed from that point forward. Each day I would see new pins and the more I read about blogging, the more I wanted to do it! Patrick and I had talked before about wanting to open our own business but I could never really pinpoint something that I was passionate enough about to want to invest in. Blogging was right up my alley though.

We talked about it. We talked about it a lot. I went back and forth with the idea over and over again. Could I actually leave teaching? Did I even want to leave teaching? Was this the smart thing to do? Answers: I could leave teaching but I’d miss the kids tremendously and all my friends at work. I didn’t necessarily want to leave teaching because I know I made an impact in children’s lives, BUT I was also tired of all the pressures coming down the pipeline for teachers. It’s truly becoming ridiculous. Smart wouldn’t be the best way to describe this decision. Risky seems a little better.

What ultimately made the decision clear for me was Zach. Four years. I have four years and after that, he’s gone. Sure he’ll come back for summer break and winter break but it’s not the same. I wanted to be the involved parent for a change. I wanted to be available for our son and experience what it’s like to be able to volunteer when needed. How much longer would I have that opportunity? I’m so fortunate that Patrick has a job that allows me to take this risk. We are in a place where I can afford to not have an income coming in because of how hard he works on his end. Who knows if I would ever have this opportunity again. Would I always regret not taking the risk and going for it? Probably. So I went into my principal’s office, blurted out “I’m not coming back next year!”, and that was it. I finished the school year and said goodbye to teaching on June 2, 2017.

We got up at 6 am and Zach got ready for his first day of high school. He ate breakfast, took his First Day of School picture, and we headed into the car. The three of us. Can you believe in all these years this is only the second the time that we all were there together on the first day of school? Kindergarten was the first. We dropped Zach off in the carline and headed home.

Some of my closest friends called and texted me and I, of course, wished them a great first day of school. The first day is always an exciting day filled with a little bit of anxiety for a teacher. This is a feeling I had grown to look forward to each year.

Now it’s different. Today is a new beginning for me. Today I officially became a mom of a high schooler and a full-time blogger. While my friends are meeting their students for the first time I’ll be home, by myself, writing to someone, anyone who I hope can learn something from me. It’s ironic but I’m filled with feelings of excitement and anxiousness as well. Today begins a new journey for me. Who knows what the future holds. What I do know is I am happy with my decision and I’m looking forward to the road ahead. 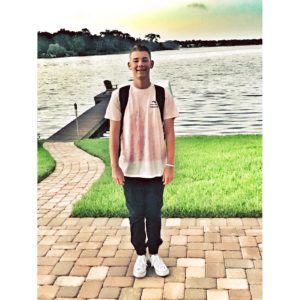 I remember the first day of Kindergarten as if it were yesterday. I can see the outfit Zach was wearing, the brand new backpack on his shoulders, and of course his two toy lizards, Zach 1 and Zach 2, that just had to be in the picture too. Looking at the picture I took this morning I see a young MAN. An almost 6-foot tall young man who will be taller than his dad before I know it. I’m so proud of the man he is becoming. He’s destined for greatness. Mark my words. This boy will be something one day! I love you, Zach.

How To Organize An Already Organized Room »