The secret to any successful Puerto Rican dish is having the perfect sofrito recipe. Puerto Rican sofrito is a mixture of peppers, onions, garlic and cilantro, and the base ingredient in almost every Latin dish you’ll ever try. Come see how my family makes it! 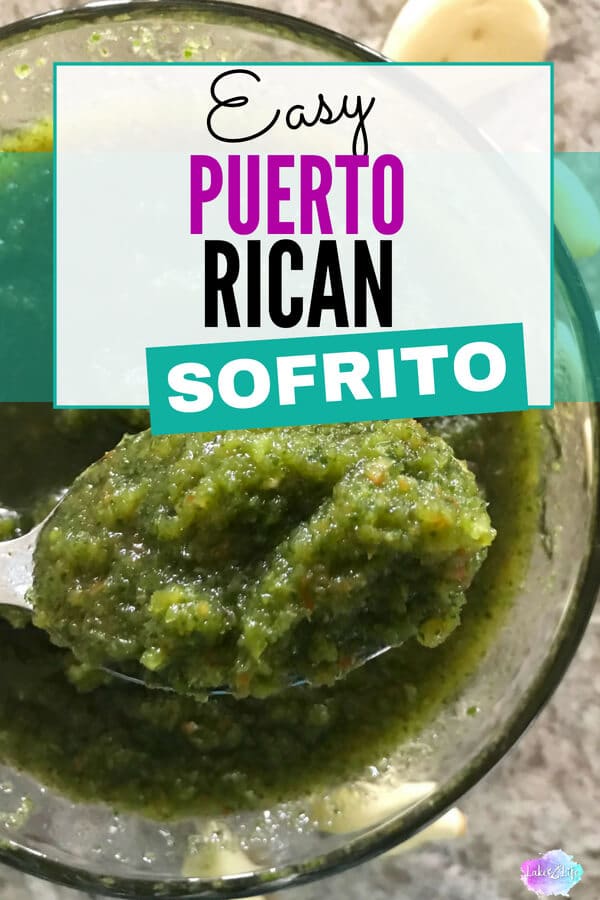 I’m so excited to share this recipe for Puerto Rican sofrito with you today. I’ve been waiting my whole life for this recipe!

Ok, that might be a teeny bit of an exaggeration but it was totally necessary for you to understand how very important learning this recipe was for me.

Let me give you a little background information as to why.

If you’re new to the Lake Life State of Mind community, you might not be aware that I’m half Puerto Rican. Wondering what the other half is? Jewish if you can believe that! I talk about this interesting combo and share another delicious recipe in this post, Mandarin Orange Chicken Salad Sandwiches.

My parents divorced when I was very young. I ended up moving from New York to Florida with my mom when I was five years old. My mom’s side of the family all migrated down to Florida, while my dad and his family stayed primarily up north.

At the age of seven, I started making yearly trips to see my dad in New York. One of the main highlights of every trip was getting to eat my grandma’s rice and red beans. To this day, there’s not a single person who can make Puerto Rican dishes like she did. I’m sure everyone feels that way about their grandma’s recipes.

I stood in the kitchen and watched her make some of these Puerto Rican dishes multiple times, but I could never replicate them. I’m sure many of you can relate when I say that my grandma never followed a recipe. She’d been making beans since she was 10 and it was second nature to her. She’d know how much water to add, how much sofrito, etc. just by looking in the pan.

I never knew why until I got older, but all my grandma’s recipes seemed to have the same distinctive flavor to them. She would make Italian spaghetti sauce and pasta but it never tasted anything like the traditional Italian version we are all used.

Why did every dish taste similar? I now know it’s because she started almost all her recipes with sofrito!

Sofrito is the base of so many Hispanic dishes. It is used in the same way that Italians saute garlic and onions in olive oil at the start of any dish. Or the way Cajun cooking starts with sauteing a holy trinity of chopped bell peppers, onions, and celery.

Sofrito can be purchased at the grocery store but it doesn’t hold a candle to the fresh stuff! I’m telling you this from experience since I’ve tried using it before. If you know what REAL Puerto Rican food tastes like, the store-bought sofrito just doesn’t compare.

My Titi Pricilla came to visit us at the lake last week and I begged her to make sofrito with me so I could see how to do it. We made a huge batch of sofrito and now I have a freezer full of it. I was also able to take pictures and make notes along the way. I haven’t tried making it on my own quite yet, but I’m hoping I’ll do a little better this time around.

Before I teach you how to make sofrito, I want to warn you that this recipe is more of a guideline and not a set-in-stone thing. My titi actually uses this recipe from Latin Mom Meals as a guideline for her sofrito. She says the recipe is very similar to our family’s sofrito. I’m in love with this website, by the way, and can’t wait to put my homemade sofrito to good use with some of her recipes.

So what do I need to make Puerto Rican Sofrito?

This recipe couldn’t be any easier because your food processor or blender does all the work. The hardest part of this recipe is seeding and chopping all the ingredients.

You can tear the cilantro and recao/culantro, but all the other ingredients will need to be chopped. Remember that a rough chop is fine since the blades of the food processor or blender will be doing most of the work for you.

This is cilantro. It’s available at pretty much every grocery store. 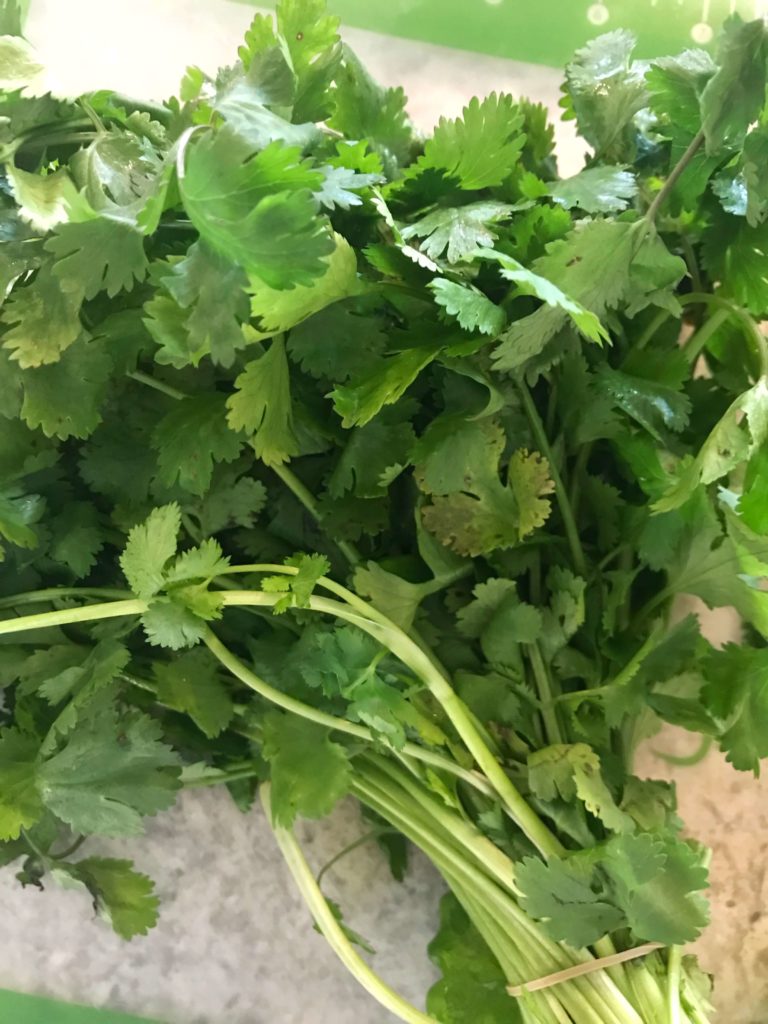 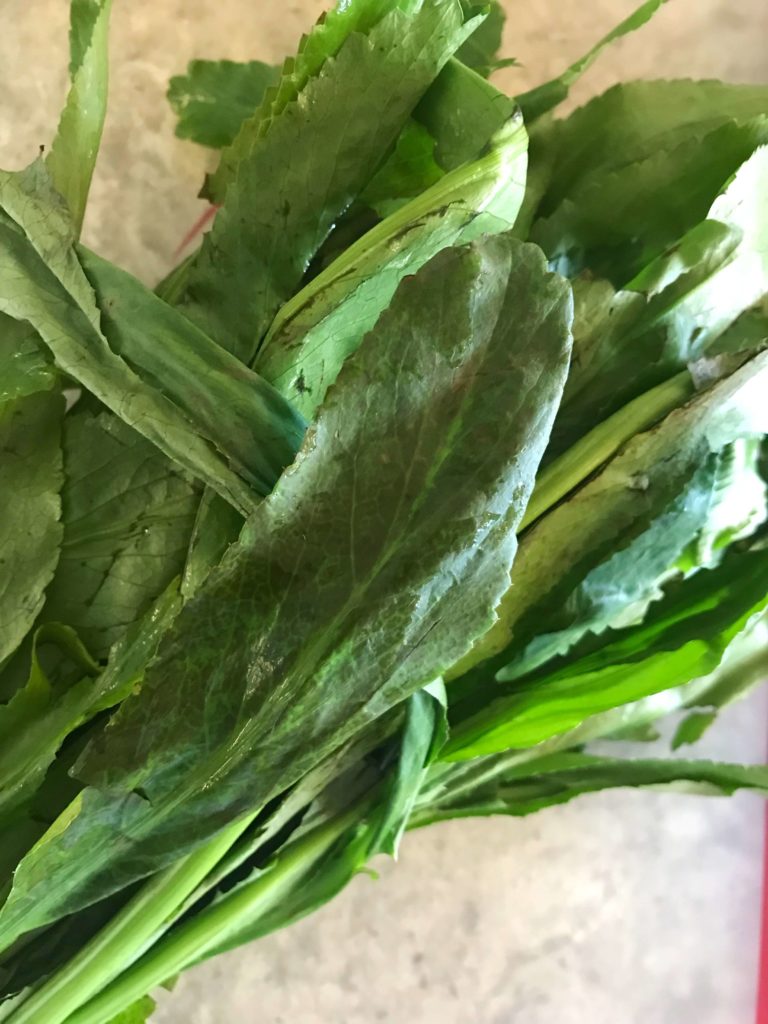 It’s also about 10 times stronger than cilantro. You can read about the differences, here.

You won’t be able to find this in a regular supermarket. You’ll want to check for it in a Latin or Asian market instead. If you can’t find it, use **2 bunches of cilantro. This is what my titi has to do since she can’t find it where she lives in Georgia.

Cubanelles are a type of sweet peppers and can be found in your regular grocery store. We found them in red and green this time, but I normally see them just in the green variety. 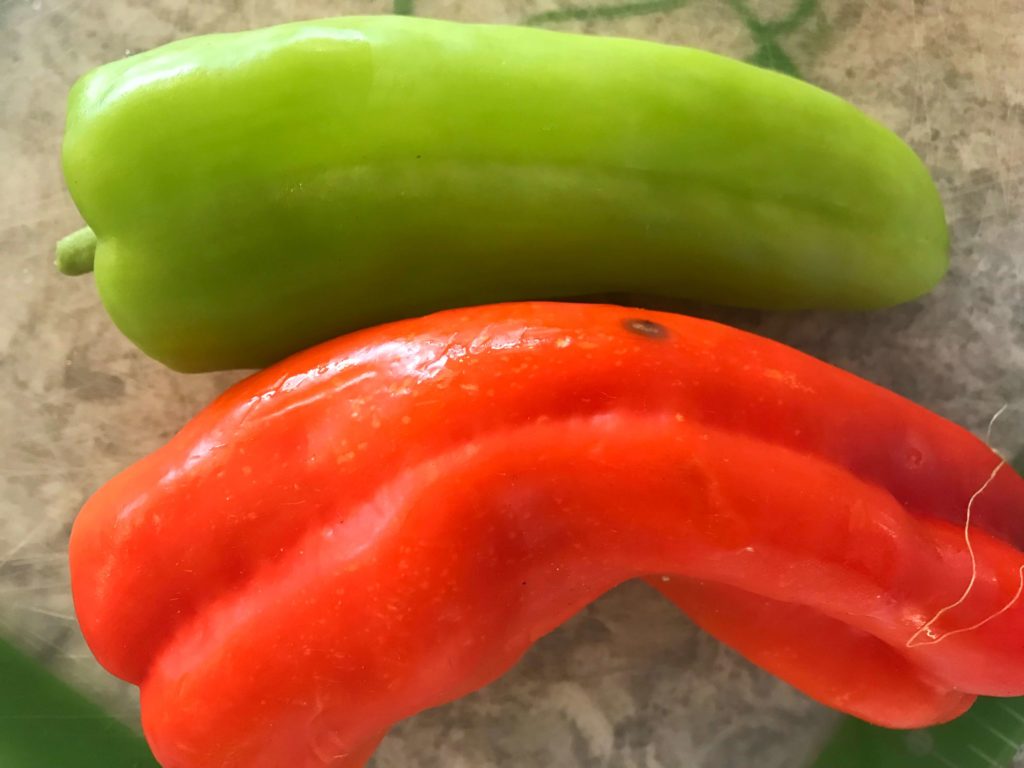 Aji dulce peppers are tiny sweet peppers that look like this. 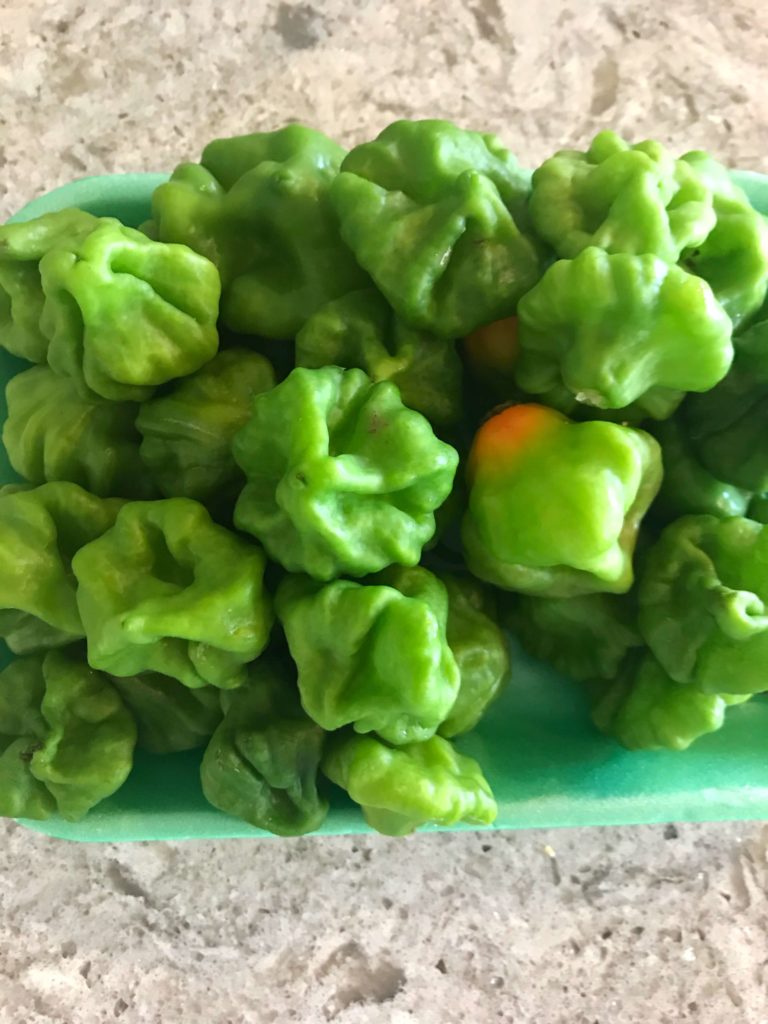 They are hard to come by and can not be found in a regular grocery store. You’ll want to check out your Latin or Asian market for these peppers as well. It’s said that these peppers are what really make the taste of the sofrito come alive. If you can find them, awesome! If not, **substitute one yellow bell pepper. 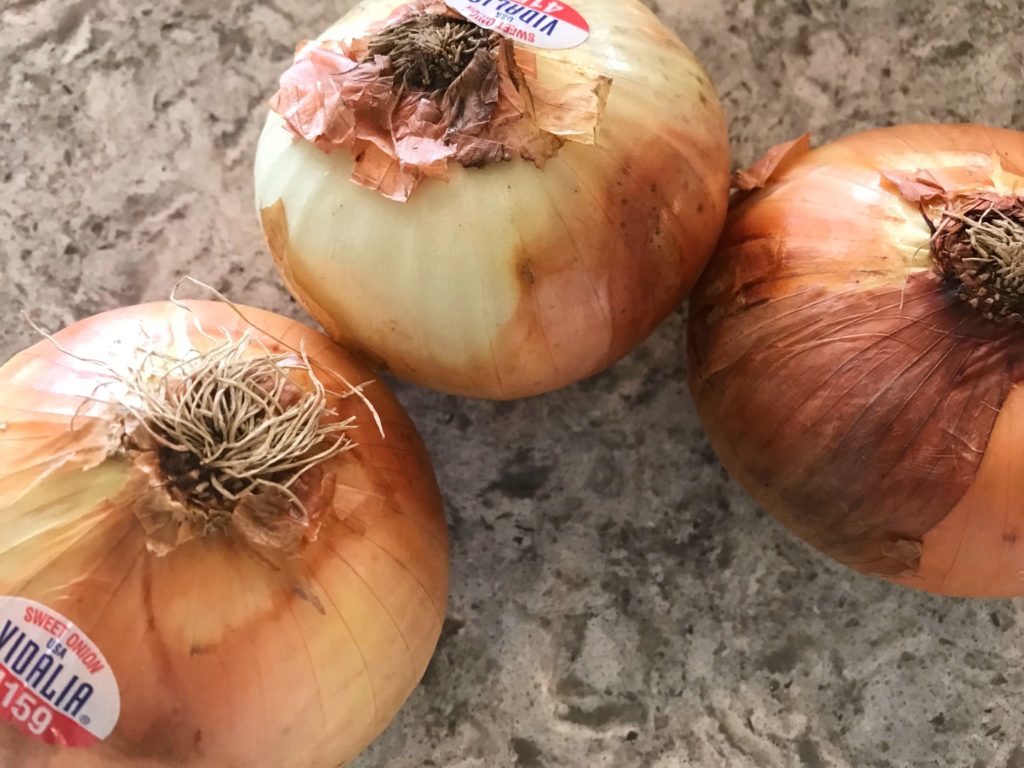 We were able to find peeled garlic cloves which made my titi super excited! 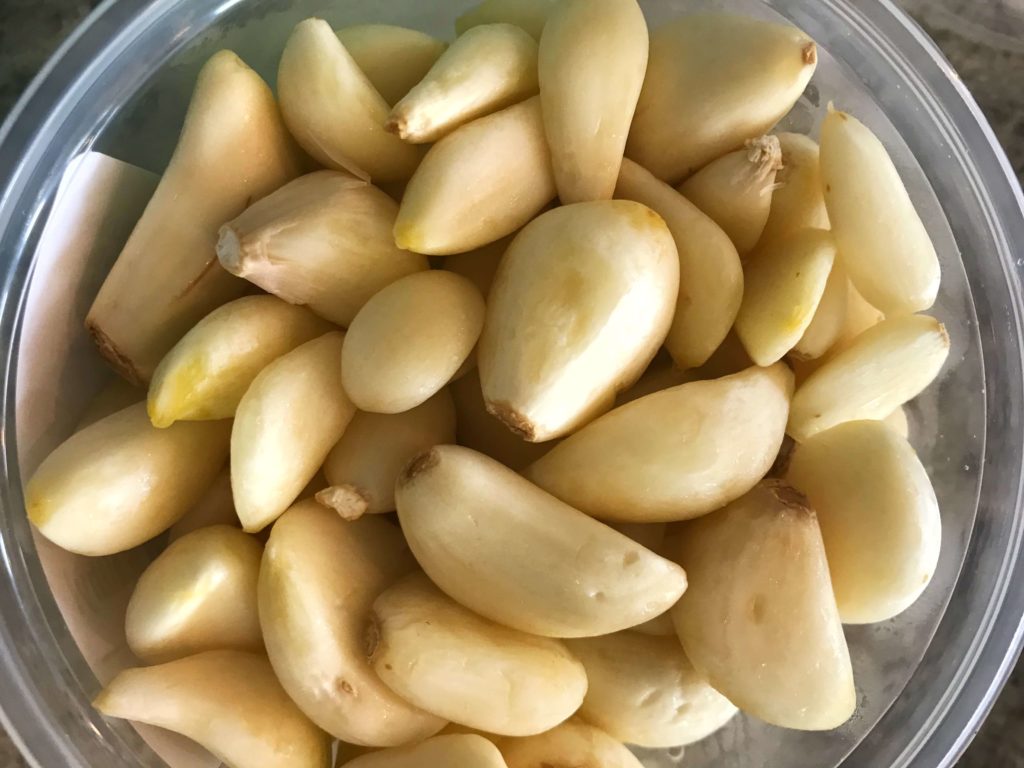 Once everything is chopped and ready to go, you can start loading up your food processor or blender. You’ll want to do this in batches.

Start by tearing a little bit of the cilantro and recao/culantro and placing them in the food processor. Add a little of each of the other ingredients as well. 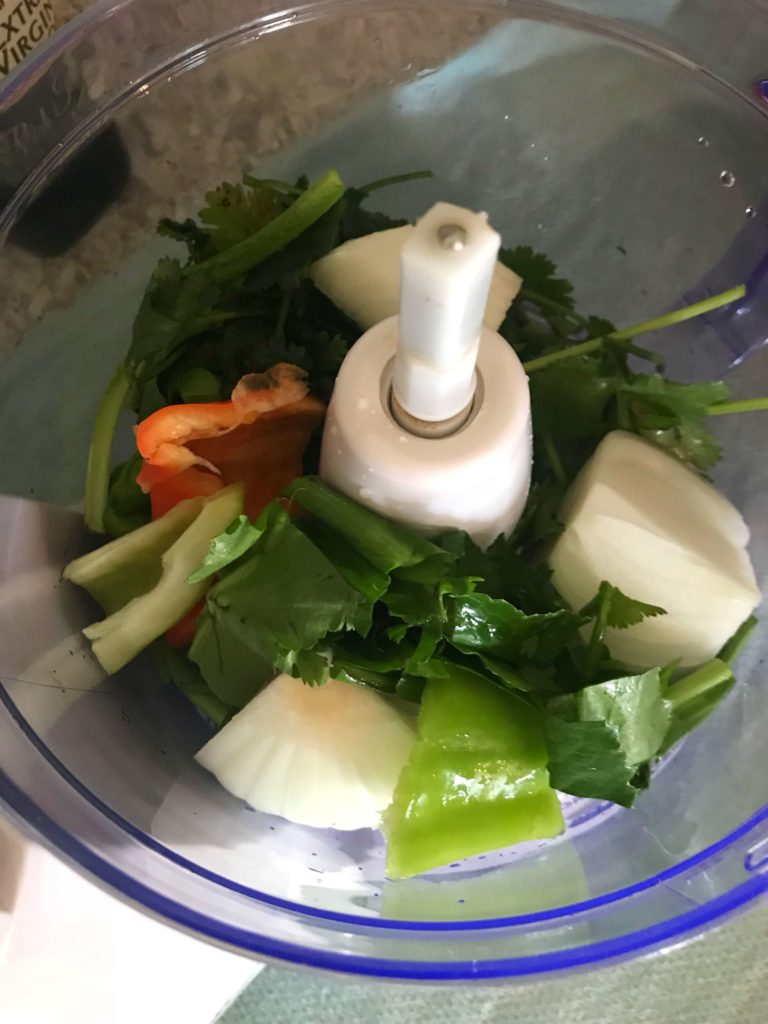 Put your food processor on the highest speed and give everything a whirl. 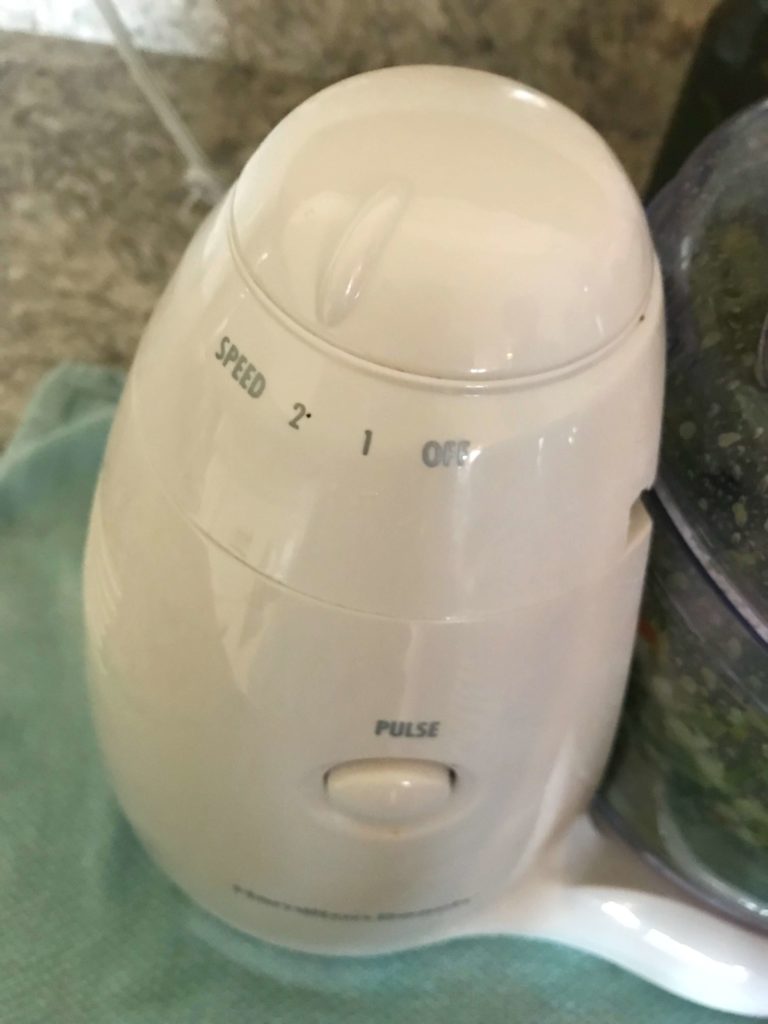 You want the ingredients to break down to a similar consistency of a smooth salsa. 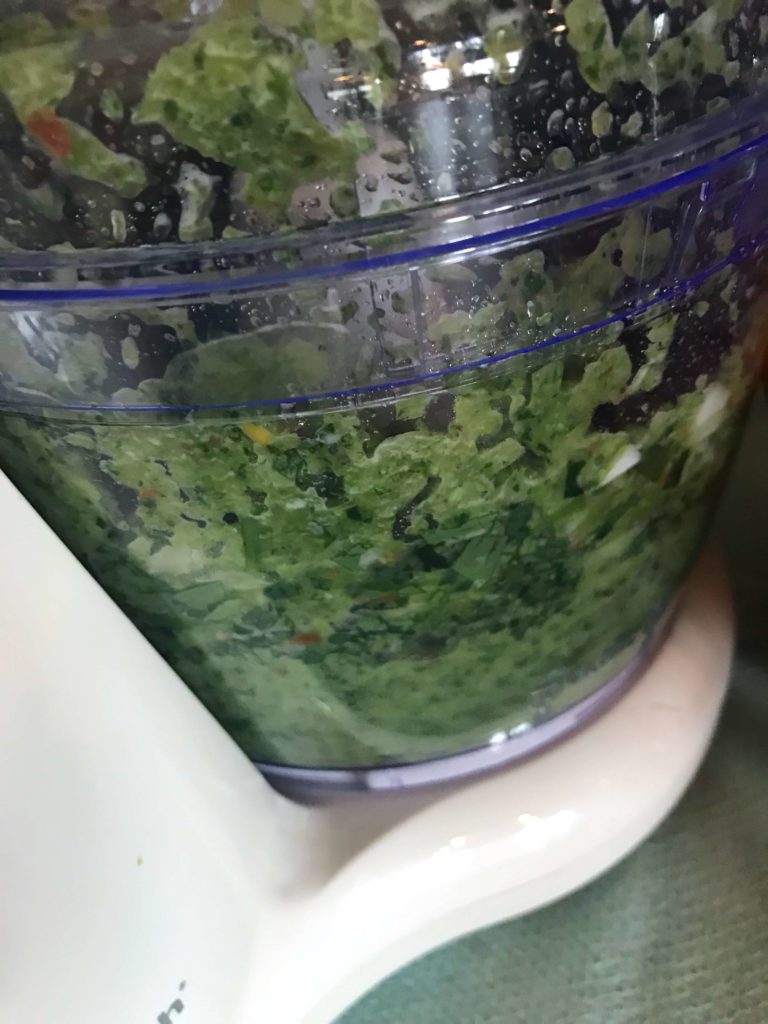 Add the next round of ingredients and continue mixing. Towards the end, drizzle in your ¼ cup of olive oil.

Keep what you will use for the next two weeks in an airtight container to place in your refrigerator. 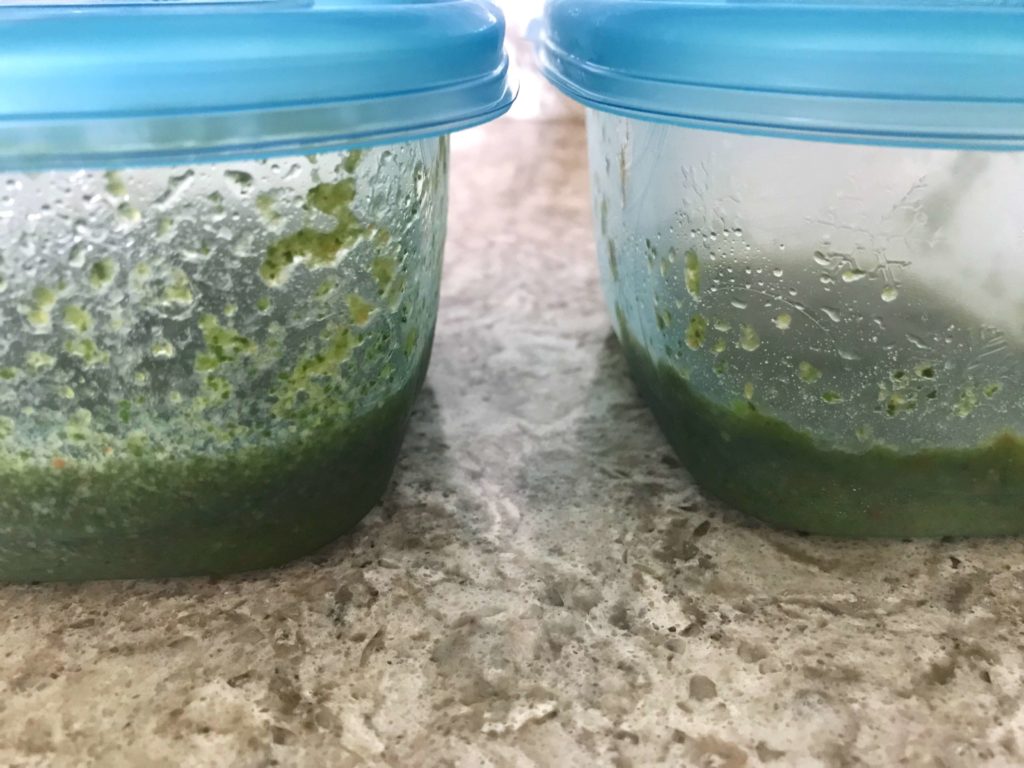 Use additional airtight containers to freeze the extras. 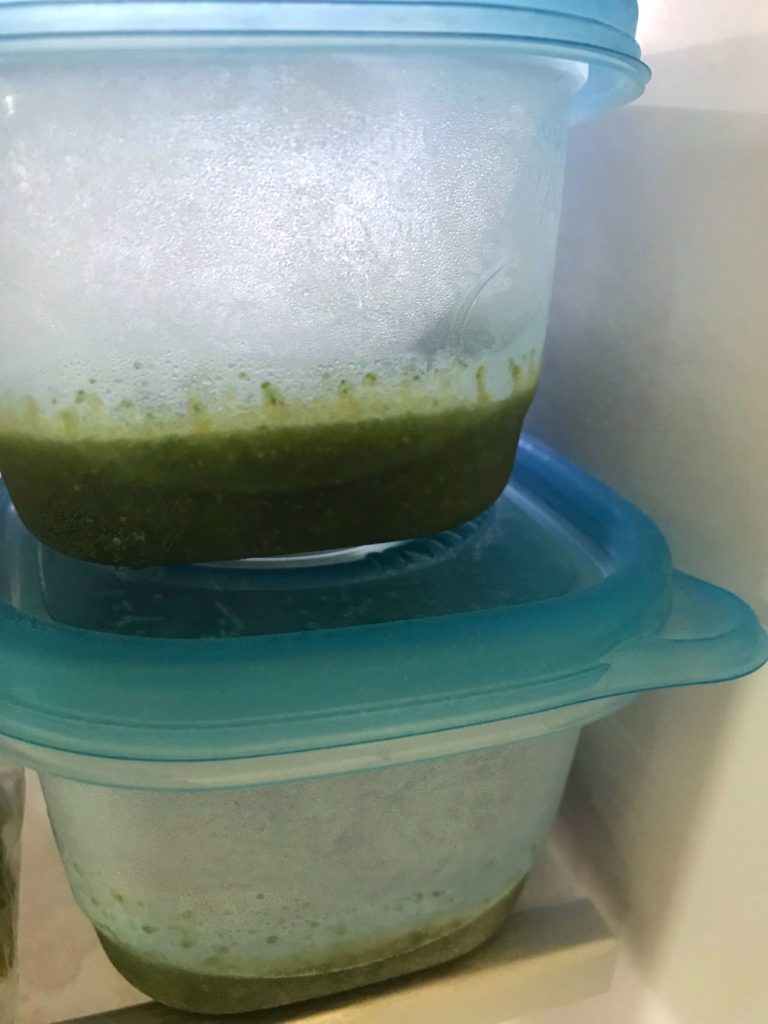 Another great tip for freezing extras is to use ice cube trays. Make sure to buy ice cube trays specifically for your sofrito because the aromas of the ingredients will penetrate through them and you won’t be able to use them for ice anymore.

Once the sofrito freezes, pop out the little cubes. 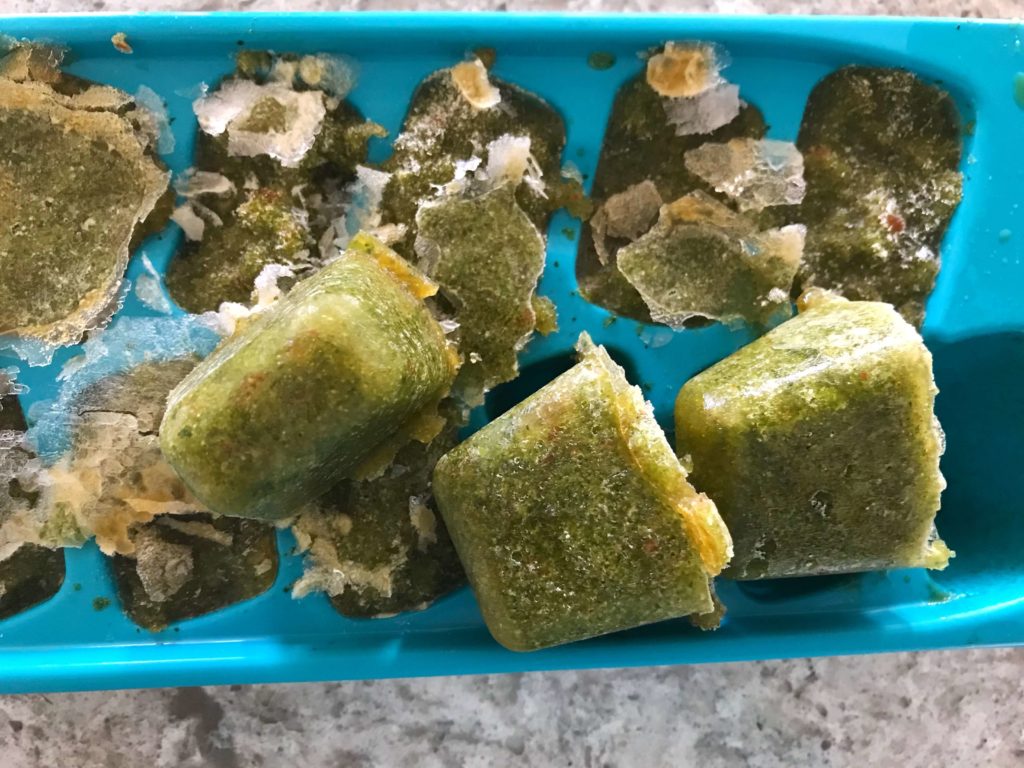 Place them in a ziploc bag. These tiny cubes are perfect for a small batch of arroz con gandules or red beans. 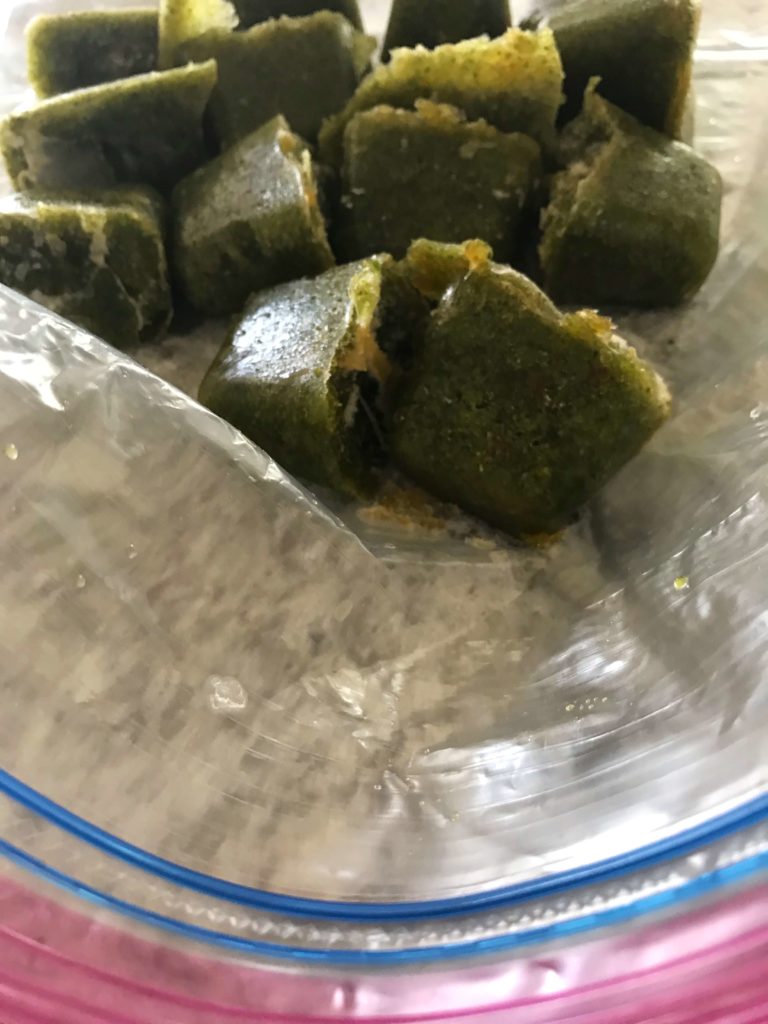 And there you have it! Puerto Rican sofrito is a cinch to make but makes a world of difference when it comes to the flavor of your food. I hope I’ve convinced you to try this for yourself! Geez, I’ve even made myself hungry. Enjoy! 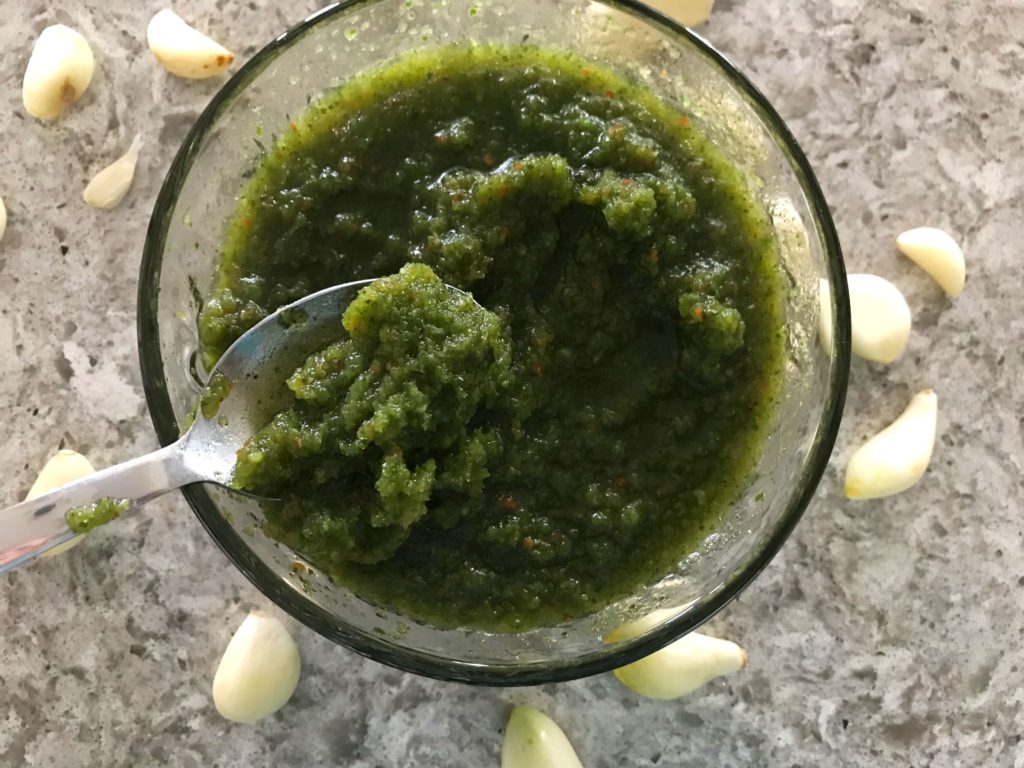 5.0 from 5 reviews
Puerto Rican Sofrito
Print
The secret to any successful Puerto Rican dish is having the perfect sofrito recipe. Puerto Rican sofrito is a mixture of peppers, onions, garlic and cilantro, and the base ingredient in almost every Latin dish you’ll ever try. <g class="gr_ gr_183 gr-alert gr_gramm gr_inline_cards gr_run_anim Grammar only-ins replaceWithoutSep" id="183" data-gr-id="183">Come</g> see how my family makes it!
Author: Tiffany @ Lake Life State of Mind
Recipe type: Sauce
Cuisine: Puerto Rican/Latin
Ingredients
Instructions
3.5.3251
Treasured Recipes! Do you have any favorite family recipes? Does your significant other? What are your kids’ favorite recipes? Try this fun activity with your family today! Snag a copy of this printable from my free resource library (fill out the form at the bottom for the password!) and start recording your family’s favorites. If you don’t know the recipes, or how to make them, start learning now! Memories are being made through these special recipes. 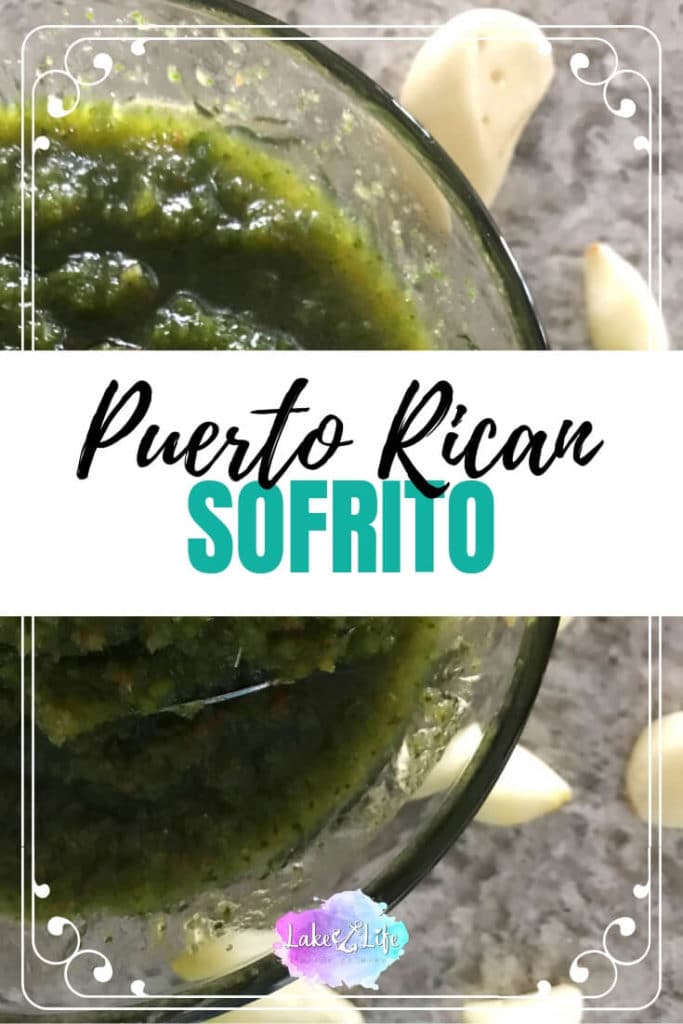