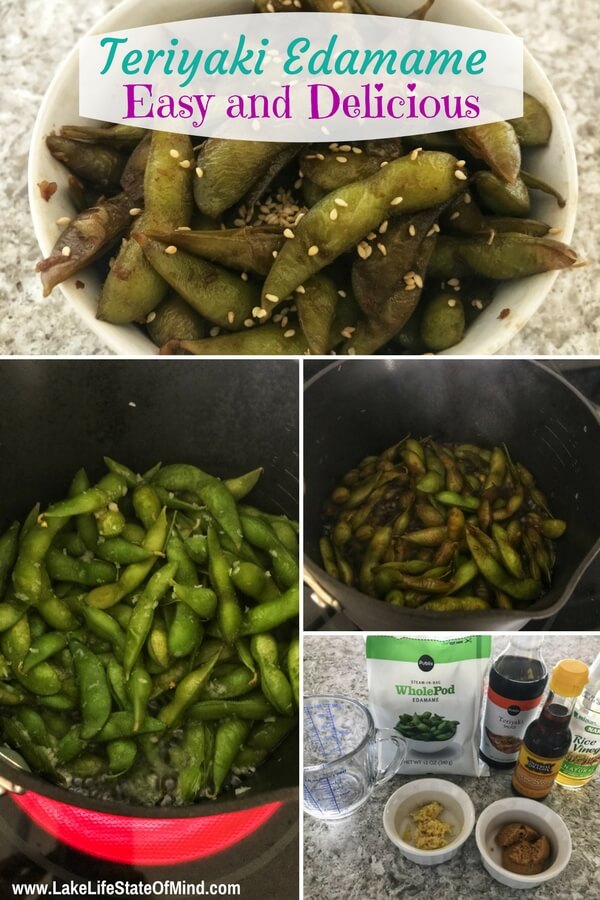 I have found that there are two types of people when it comes to edamame. Type A is the person who is literally doing backflips right now because they absolutely LOVE edamame and jumped on the “Edamame Bandwagon” a really long time ago.  The Type B person is the one who is sitting on the other end of this post thinking, “What the heck is an edamame?!” Whatever your type, whether brunette,  blond or redhead (I couldn’t resist the cheesy joke), this Teriyaki Edamame recipe is perfect for you.

Type B people probably have a ton of questions right now so I just want to give a little bit of information about this foreign word you’re hearing for the first time. Type A people, be nice and bear with me for a moment.

Edamame is a soybean that is extremely high in fiber and is said to have many health benefits. Some of these health benefits are lowered cholesterol levels in both men and women and the lessening of side effects connected to diabetes. There are many more benefits but I’m assuming you get the point. Edamame is good for your health!

Edamame is available in the frozen vegetable section of your grocery store. They come in two varieties: shelled or in pods. The soybeans are steamed and frozen needing only to be thawed before eating. Shelled edamame make great additions to salads, while the edamame still in the pods are just fun to steam and snack on! No matter how you slice it, or steam it in this case, edamame are delicious!

The first time I was introduced to edamame was a couple of years ago. “The Boys” and I went out to dinner for sushi and we wanted to share an appetizer. We saw edamame on the menu and had no idea what it was but the waitress highly recommended it and told us to give it a try. The edamame in the appetizer was just steamed and then tossed in salt. This is how you’ll find it at most restaurants, and although it might sound kind of boring, the flavor is amazing and it’s highly addictive! We were honestly hooked instantaneously.

From that point forward, anytime we went out for sushi, we always looked for edamame on the menu. We lucked out and found a restaurant that added a variety of different sauces to their edamame. This is where we were introduced to Teriyaki Edamame. All I can say is, OH MY GOODNESS! The flavor was off the wall incredible. I came home from the restaurant that night determined to find a recipe to make the Teriyaki Edamame at home.

I found this recipe off of Pinterest and it seemed simple enough to make so I gave it a try. I started combining the ingredients for the edamame in the pot and the smells that hit my nose had my mouth watering already. It took about 10 minutes to make and about 5 minutes to eat once I served it up for me and “The Boys” to try. That’s not an exaggeration. We devoured it!

I learned after making the recipe for the first time that if I was making the edamame to share, I needed to double the recipe. I made this for my dad and brother Brandon when they came to visit me a few years ago. They were Type B people at the time and had no idea what the heck edamame was. I convinced them to try it and they LOVED IT! My brother even called me when he got back home to get the recipe so his wife could make it for him. I’d say that’s a success!

Once you see the ingredients in this Teriyaki Edamame, you’ll know why the taste is out of this world. It’s not as healthy as the plain old edamame, but it’s really worth trying at least once if only to say you tried it 😉

So what do I need to make Teriyaki Edamame? 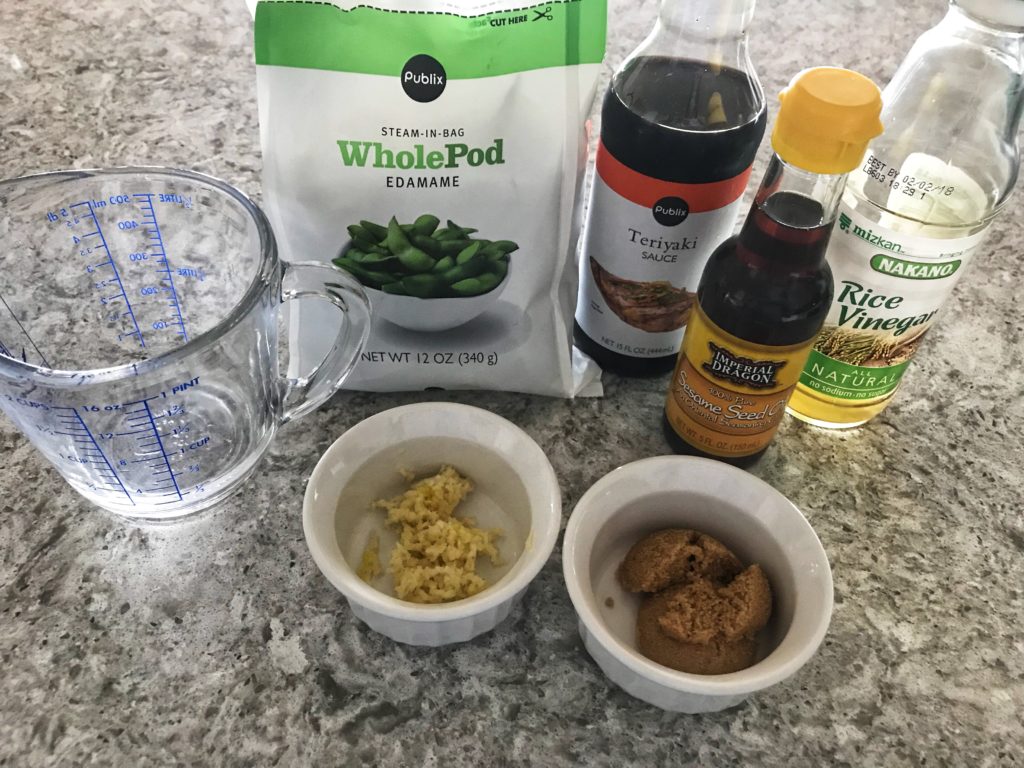 Begin by placing the edamame, water, and garlic cloves in a pot over high heat. 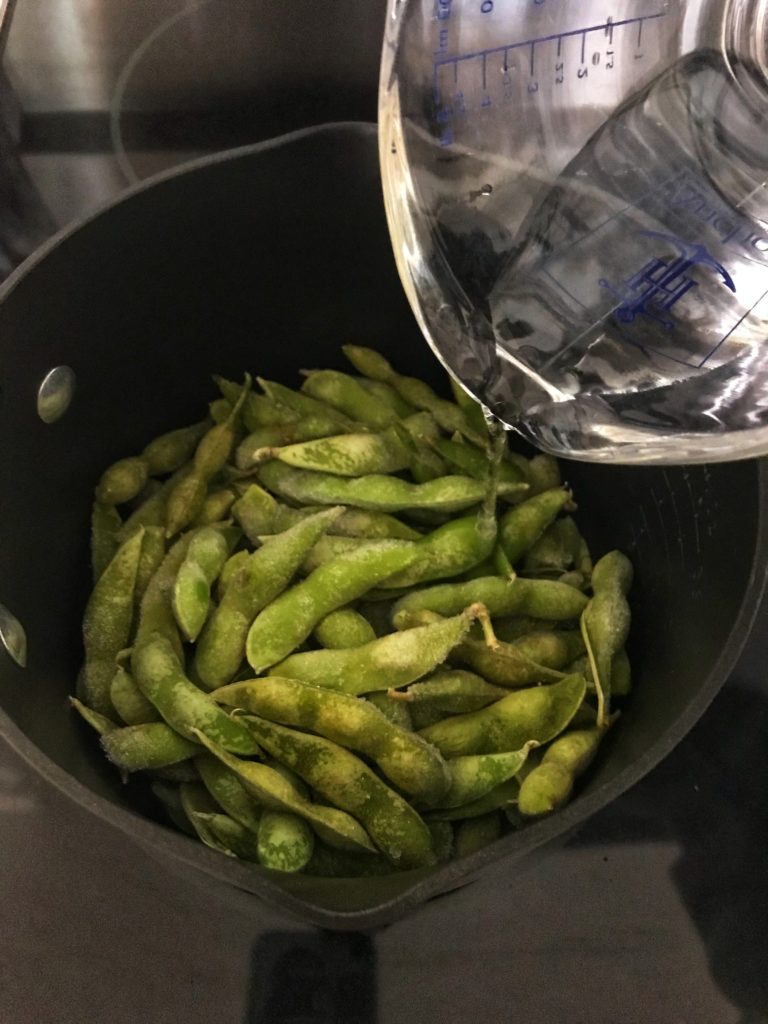 Stir the ingredients together. 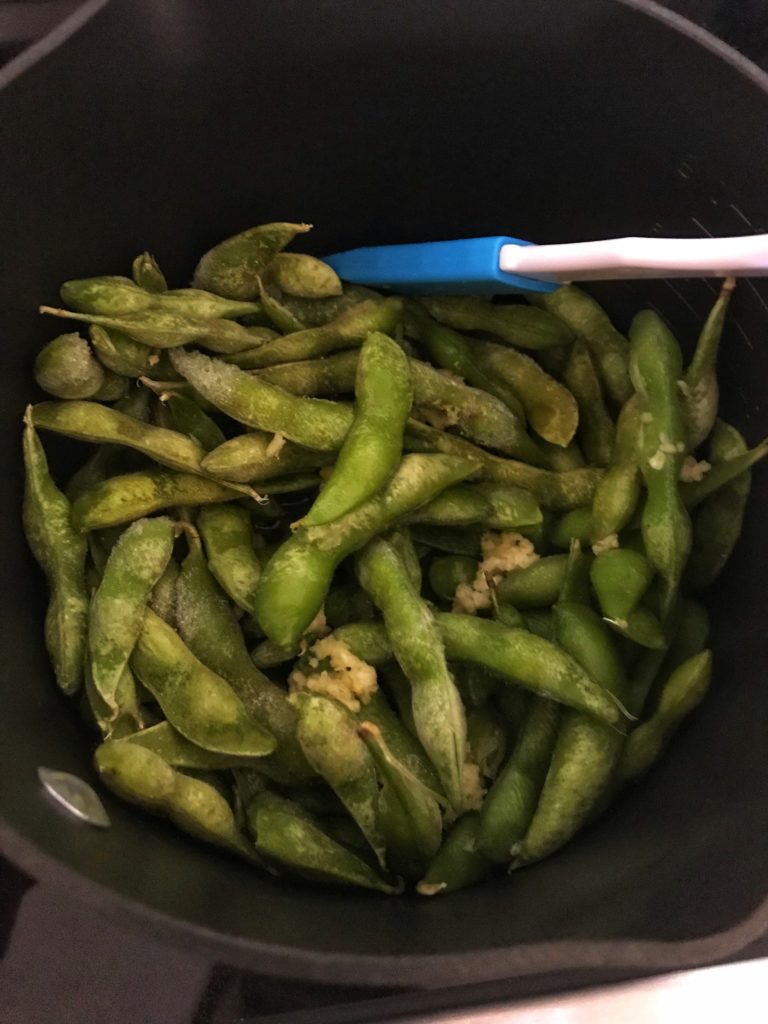 Cook about 5 minutes, or until the water has almost evaporated. 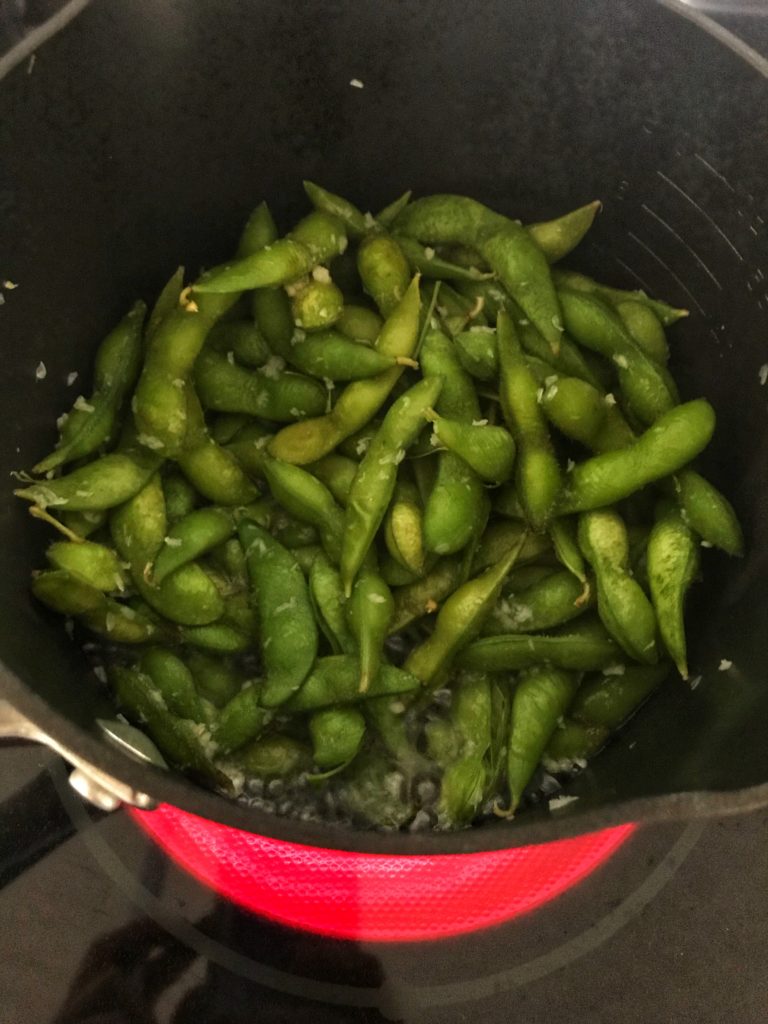 Lower the heat to medium-high and add the brown sugar, rice vinegar, teriyaki sauce and sesame seed oil to the pot. 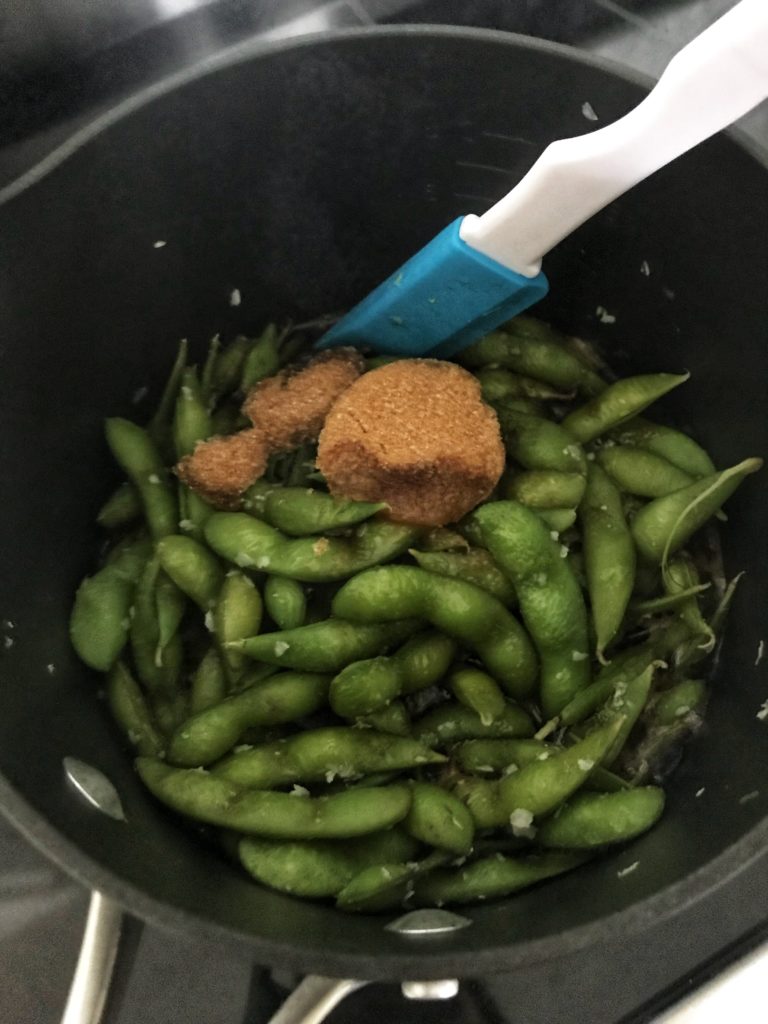 Stir and cook an additional 5 minutes until the sauce has thickened up and coated all the edamame. 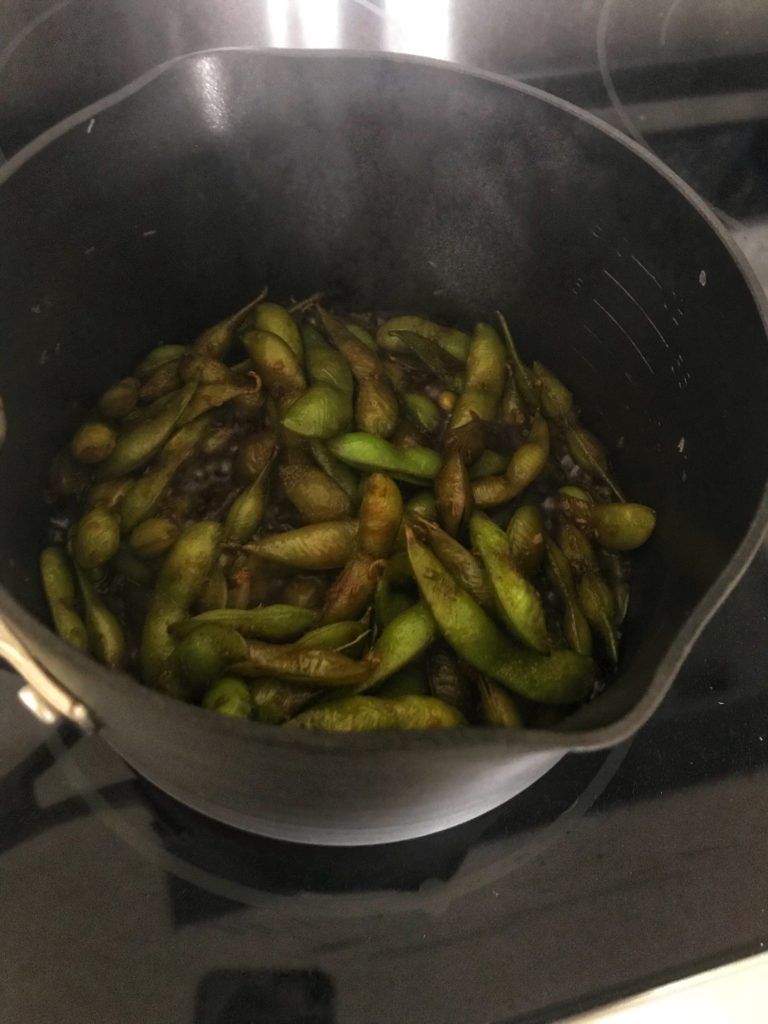 Pour the edamame into a bowl and sprinkle with toasted sesame seeds. 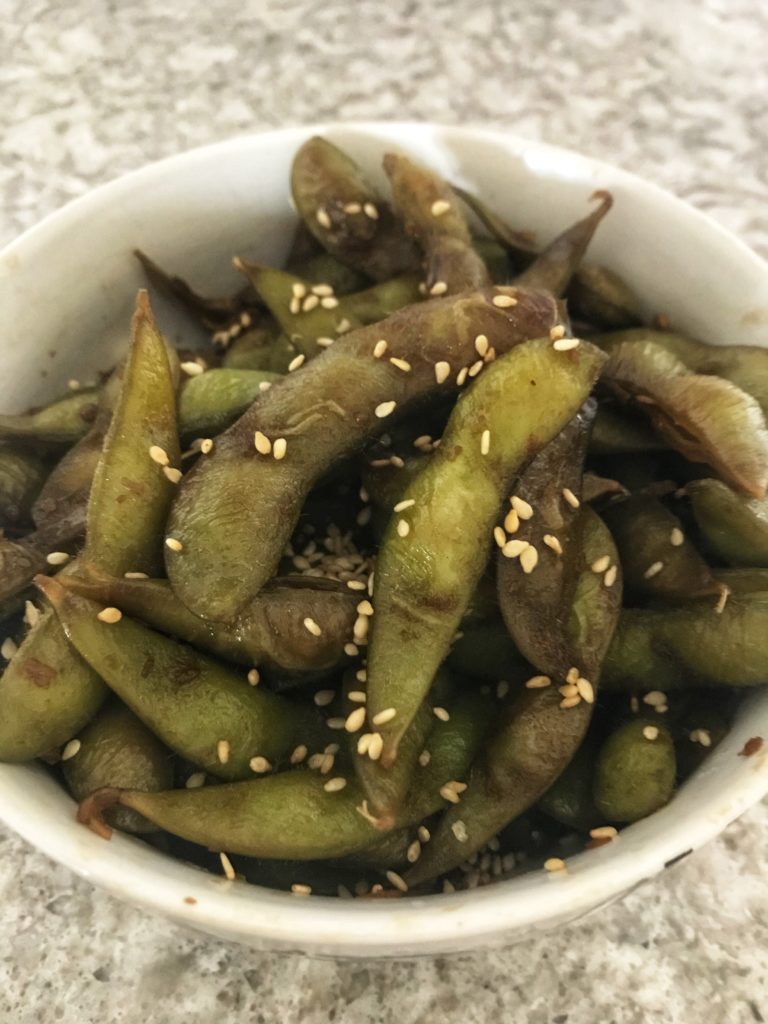 Rice vinegar, sesame seed oil, and teriyaki sauce can all be found in the ethnic food aisle of your grocery store.

The toasted sesame seeds are made by McCormick and can be found with the spices.

Teriyaki Edamame is an easy and simple recipe to whip up. Enjoy it as an appetizer or just a snack. Take the plunge and dive into this bowl of Teriyaki Edamame, ASAP.  You won’t regret it! 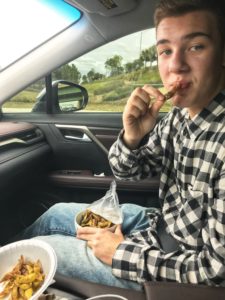 Teriyaki Edamame
Print
Prep time
5 mins
Cook time
10 mins
Total time
15 mins
Teriyaki Edamame is a simple and easy appetizer or snack that you can whip up in no time. Have no idea what edamame is? All you need to know is it's delicious and good for you! Stop by the blog to get the recipe.
Author: Tiffany @ Lake Life State of Mind
Recipe type: Appetizer
Ingredients
Instructions
3.5.3229